The woman had dark hair that fluttered in the wind, glowing skin that was as smooth as silk, and a perfect figure with no excess fat. She was like a celestial descended from heaven, strolling at a leisurely pace under the pale moonlight.

That beautiful appearance of hers was just an illusion, though. Whether it was the first time Eun Han-Seol had met her, or many years ago when Sa-Ryung had sworn fealty to her, she had always looked exactly the same.

Dozens of years had passed since she became known as the Witch, yet as if time had stopped for her, she never aged a single day. Because of this, it was rumored that she was an unaging, undying celestial.

She stared at Tae Mu-Kang, her white eyes brimming with murderous intent.

She was one of the Four Great Demon Generals of the Silent Night, and she prided in her undefeated legend. The only stain on her perfect battle record was her defeat at Tae Mu-Kang’s hands. Sure, he had laid out a trap for her and taken her by surprise, but a defeat was still a defeat.

She was a woman who would not make excuses for her defeat. All she wished for was sweet, sweet revenge. 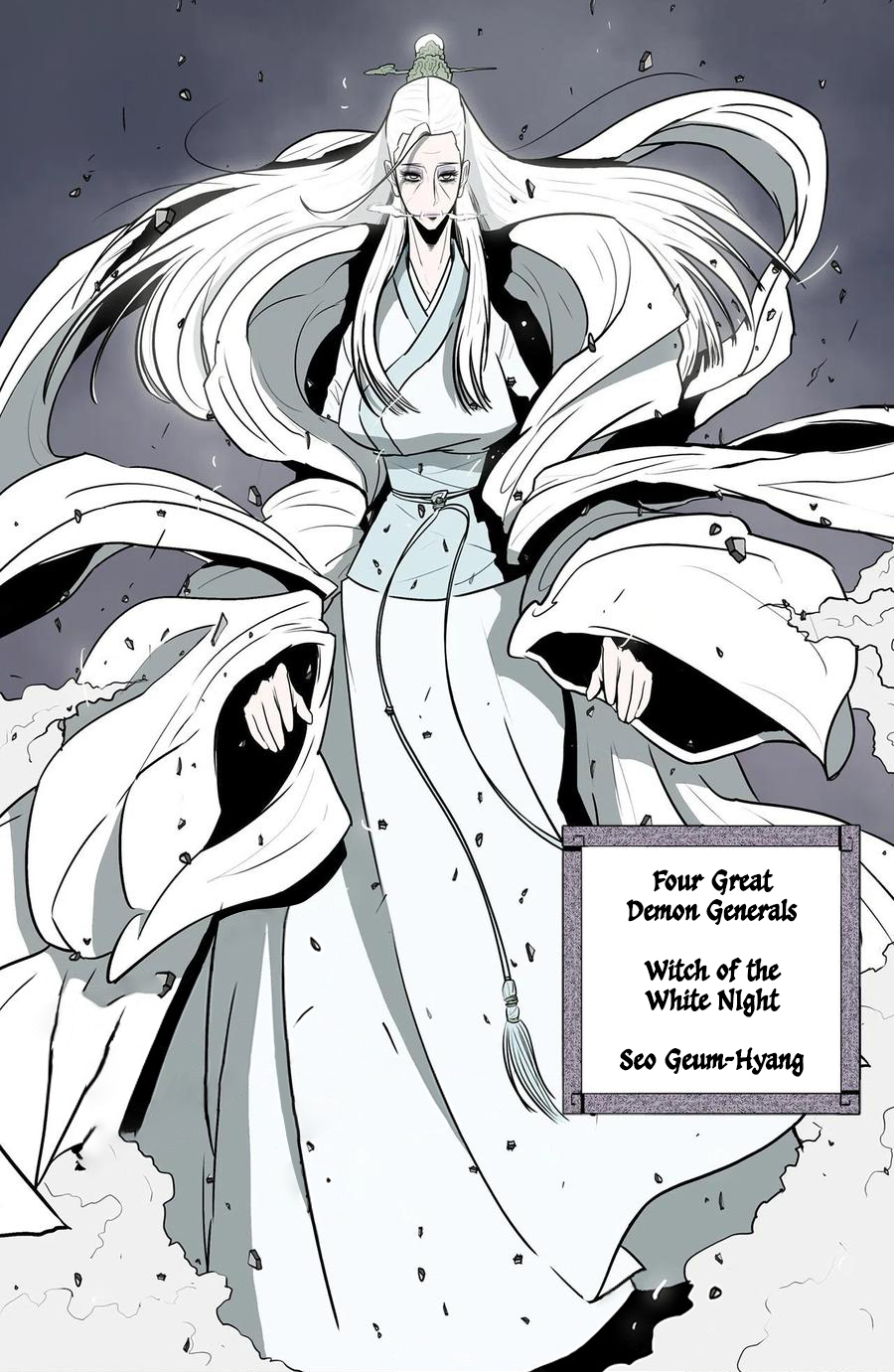 With the proud bearing of a queen, she looked down at Tae Mu-Kang and said, “Demon of Chaos, you should never have been born in this world.”

“I was created by your own allies, the Silent Night. But I’m sure you already knew that, Witch.” Tae Mu-Kang roared like a wild beast.

Compared to his taunting, mocking disposition when bullying Eun Han-Seol and Jin Mu-Won, his attitude toward Seo Geum-Hyang was serious. She was an enemy whose continued existence he could not tolerate, and a foe he could not underestimate. He did not bother hiding his hostility toward her, and forcefully engaged his chi. As the whirlwind of his Rebound Flux surrounded him, the wound inflicted by Jin Mu-Won enlarged and more of his blood spilled out, but he ignored it.

“Tee hee! I was going to use that little bitch as bait to lure you out, but to think you would show yourself like this.”

“Hmph!” Seo Geum-Hyang sneered at Tae Mu-Kang’s provocation and leapt toward him. She pushed the Heart of the Silver Soul to its limits, causing a silvery-white mist to enshroud her body like a translucent veil.

It was the same martial art as Eun Han-Seol, but the feeling that Seo Geum-Hyang gave off was completely different. The gap between their levels of mastery was just too big.

In an instant, Seo Geum-Hyang appeared in front of Tae Mu-Kang, leaving behind a trail of silver-white afterimages.

The Witch of the White Night and the Chaos Demon clashed.

Eun Han-Seol felt herself being helped up and struggled to open her eyes. “Who…is it? Sa-Ryung?” she mumbled.

“Were you the one who led Master here?”

Eun Han-Seol was wounded all over. Her limbs were bent in the wrong directions, her shoulder bone was broken, her chest was sunken in, and her face was covered in blood. The fact that she was still alive was a miracle.

Young Mistress would never have gotten so badly hurt if she didn’t have to protect Jin Mu-Won. It’s all that stupid boy’s fault.

Besides, as Madam’s disciple and a practitioner of the Heart of the Silver Soul, Young Mistress must abandon all human emotions. Only then can she become enlightened and view the world without bias.

*Until she met Jin Mu-Won, Young Mistress was always perfectly rational and composed. There was no better inheritor of the Heart of the Silver Soul than her. *

Madam only took Young Mistress in as a disciple because of her personality traits, but Jin Mu-Won has changed her. It will be dangerous for Young Mistress if we let him live.

The most dangerous people in the gangho were those who excelled at staying unnoticed, like Jin Mu-Won. Everyone, from Heaven’s Summit to the Silent Night, all thought that the Northern Army was thoroughly annihilated, but it was in fact hiding a ferocious beast quietly polishing its claws. Furthermore, the young man was the current Lord of the Northern Army, which automatically made him the Silent Night’s worst enemy.

“He hasn’t done anything wrong.”

Sa-Ryung’s heart missed a beat, because Eun Han-Seol’s words had hit home. They first looked at the pale face and lips of the girl, and wondered if she could read their mind. They then turned toward Jin Mu-Won, seriously considering whether they should ignore the Young Mistress’s orders just this one time.

“It’s all my fault. I was lonely, so I selfishly pushed my emotions onto him. That’s why, please don’t blame him.”

Mu-Won is the first, and the only person who has ever truly loved me. After leaving the Northern Army Fortress, I might never get to experience that kind of feeling again. That’s why, I cannot let my most precious memory be ruined even if I have to die together with him.

“You’ll listen to my request, right?”

“Yes…Young Mistress.” Sa-Ryung acquiesced and nodded. They were cruel to everyone else, but had a soft spot for Eun Han-Seol. Still, whenever they looked at Jin Mu-Won, they couldn’t help but want to kill him.

“Young Mistress, please drink this,” said Sa-Ryung, taking out a wooden box from their chest pocket. They opened the box to reveal a glowing red pill wrapped in golden foil.

It was the Pill of the Supreme Gods (大羅神丹), a famed life-saving medicine within the Silent Night. Regardless of how heavily injured one was, as long as they still had one breath left in them, the Pill would be able to save them. However, due to how difficult it was to make one, not many pills were made, and only a lucky few were saved by it.

Sa-Ryung did not hesitate to give such a valuable medicine to Eun Han-Seol. The instant they placed the pill in Eun Han-Seol’s mouth, it dissolved completely and flowed down her throat.

Sa-Ryung waited for some time, but Eun Han-Seol’s condition did not appear to improve. All the Pill of the Supreme Gods did was prolong her life for now.

Nevertheless, Eun Han-Seol recovered enough energy from the Pill that she tried to stand up. Seeing their beloved young mistress struggling, Sa-Ryung’s heart melted and they helped her up.

“Han-Seol,” he replied, looking up at her from the ground where he lay. There was a gaping hole in the side of his stomach, and his left arm was broken, but Jin Mu-Won still somehow managed to smile gently at her.

From the look on Jin Mu-Won’s face, Eun Han-Seol could tell exactly what he was thinking. Her eyes welled up with tears…

Following the sound of an explosion, a powerful gust of wind swept toward the young couple. Sa-Ryung immediately shielded Eun Han-Seol with their own body, while Jin Mu-Won summoned his remaining energy to protect his own body.

They then turned toward the direction of the explosion, and saw that the battle between Seo Geum-Hyang and Tae Mu-Kang had reached its climax. Every time the two clashed, waves of energy would ripple outwards like a terrible storm.

Tae Mu-Kang was drenched in blood. The wound he had received from Jin Mu-Won hadn’t healed at all. Thanks to this, Seo Geum-Hyang had gained the upper hand.

Seo Geum-Hyang reached behind her and took out two glittering silver chakras. The name of these palm-sized rings was the “Moonlight Chakras (月光輪)1”. They were demonic weapons that heralded mass bloodshed, and were unique to Seo Geum-Hyang, the Witch of the White Night.

Only masters of the Heart of the Silver Soul could freely wield such bloodthirsty weapons, as anyone else would be consumed and killed by the chakras upon touching them.

Previously when Tae Mu-Kang had ambushed Seo Geum-Hyang, she did not have the Moonlight Chakras on her. In unarmed battle, she was no match for him, a close-combat specialist, and ended up losing horribly. Now that she had her weapons with her, though, it was impossible for her to lose.

She hurled the Moonlight Chakras at Tae Mu-Kang.

The silver rings of death spun across the air with a humming noise like a swarm of bees.

Tae Mu-Kang narrowed his brows. He was aware just how powerful these Moonlight Chakras were. However, he had no intention of backing down.

He was the Chaos Demon, a monster created especially for hunting down top-level martial artists like Seo Geum-Hyang.

The Flux of the Primeval Hellish Demon surrounded him as he charged toward the Moonlight Chakras, roaring with laughter, “HAHAHAHAHA!”

The murky storm clashed with the silver storm.

In the resulting chaotic tempest, Jin Mu-Won, Eun Han-Seol, and Sa-Ryung were all blown far, far away.