A dusky light filled the whole world, the air rumbled like someone banging on drums, and black rain fell upon the smashed ruins of the Northern Army Fortress.

“Those guys have gone crazy!” muttered Seo Mu-Sang, running out of the battlefield as fast as his legs could carry him. The four Gray Wolves of Chaos were doing the same thing as him. Although they weren’t afraid of death, Tae Mu-Kang’s killing intent was so powerful that it made even them fearful.

When the black death rays hit the fortress, the walls and buildings that had stood proudly for over a hundred years was instantly ground to dust.

Crater after crater appeared on the ground, giving it the appearance of a beehive.

Seo Mu-Sang’s eyes widened in abject horror. He never imagined that humans were capable of causing such mass destruction.

That kind of thing should be the domain of the gods of heaven and hell, right!?

Where the rain of chi fell, no living thing, not even a martial arts expert, would be left alive. It was the end of the world.

Just as Seo Mu-Sang was thinking that Jin Mu-Won, who was in the middle of all that, was dead, he saw an unbelievable sight that made him doubt his eyes.

Jin Mu-Won was carrying Eun Han-Seol on his back and running through the rain of death without getting a scratch on him.

Common sense told Seo Mu-Sang that this was impossible. Just as a human cannot run through a thunderstorm without getting wet, there was no way Jin Mu-Won could dash through that rain of death without being hit.

And yet, the impossible was happening right now, right in front of him.

A shadow without a material body.

Jin Mu-Won closed in on Tae Mu-Kang and raised his sword. Seo Mu-Sang could not sense any sword ki or sword flux surrounding the sword, but for some reason, his heart was pounding with anxiety and tension.

Although Jin Mu-Won’s attack was soundless, Seo Mu-Sang heard his short sword slice through something. It was the same for the Gray Wolves of Chaos. They had definitely heard Jin Mu-Won’s sword cut through flesh and bone.

Tae Mu-Kang was no exception. His senses were telling him that he had been sliced in half, even though Jin Mu-Won’s slash seemed to be an illusory technique.

Still, that attack had felt quite different from a normal illusory technique, where the illusion directly interfered with one’s Perception of an opponent’s action or movement. Tae Mu-Kang brain was literally screaming that he’d been cut.

A shiver ran down his spine.

At that moment, Tae Mu-Kang spotted an opening in Jin Mu-Won’s defense. He immediately spun around, gathered some of the chi around him, and aimed a roundhouse kick at Jin Mu-Won’s ribs.

Jin Mu-Won was sent flying a hundred feet away, with Eun Han-Seol still on his back. He wanted to scream but couldn’t as his flesh and bones could be seen through the wound in his chest, like a savage beast had just taken a huge bite out of him. The short sword he was so proud of was shattered, and only the hilt remained in his hand.

“Kuheuk!” he coughed, laying on the ground. His consciousness was fading, but he desperately summoned his inhuman willpower and forced himself to stay awake. 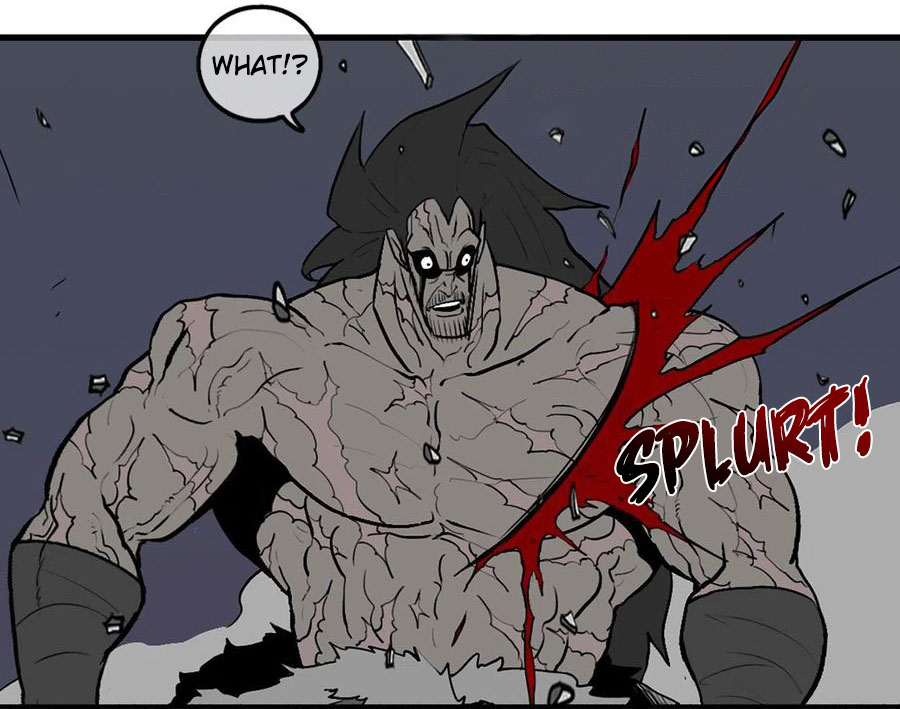 Suddenly, a fountain of blood gushed out of his shoulder, and his body shuddered involuntarily.

A look of disbelief appeared on Tae Mu-Kang’s face. “What? When did he?”

I was so sure that I dodged it! I didn’t even feel myself getting slashed. If Jin Mu-Won’s swordsmanship was a little more experienced, I wouldn’t have gotten off with only a shoulder wound. He would have lopped off my head without me realizing it. I might possess regenerative powers, but if I get decapitated, I’m dead.

“Fucking son of a bitch!”

I have to get rid of him before he gets any stronger! Just the thought of how powerful this kid could get makes me shiver.

Tae Mu-Kang staggered toward Jin Mu-Won. He trusted in his own regenerative powers, and the sooner the boy died, the sooner his anxiety would go away.

However, suddenly, he screeched to a halt, tilting his head in confusion.

He looked toward his injured shoulder.

Tae Mu-Kang had a body that was almost invincible. A small wound like this should have healed in the blink of an eye, but the odd thing was, it showed no signs of healing at all.

Tae Mu-Kang’s whole body twitched as if he were struck by lightning. He then started to tremble uncontrollably.

Is this what pain feels like? Why? I’ve never felt pain before.

Tae Mu-Kang scowled at Jin Mu-Won with bloodshot eyes, growling, “You damned bastard, what the fuck did you do to me?”

His Art of the Primeval Hellish Demon was supposed to analyze Jin Mu-Won’s chi and convert itself into a type that perfectly opposed the boy’s energy. Theoretically, it should be able to absorb and adapt to any kind of chi. However, when faced with Jin Mu-Won’s chi, the Art of the Primeval Hellish Demon literally waved the white flag of surrender without putting up a fight.

This was the first time the Art of the Primeval Hellish Demon had failed Tae Mu-Kang.

Although Tae Mu-Kang was staring daggers are him, Jin Mu-Won had no intention of answering him. That was because the instant he opened his mouth, the last of his strength would leave him.

Jin Mu-Won felt that his chi was on the verge of going berserk, but he still clenched his teeth and struggled to his feet.

Tae Mu-Kang raised his fist once more. To him, there was probably no better time to get rid of this potential threat.

Jin Mu-Won desperately willed himself to move, but his body simply wouldn’t listen to him.

Is this the end?

Suddenly, someone stood in front of him. In his moment of need, Eun Han-Seol was the one who protected him. She held out hands which were covered in a thin, silvery-white membrane of chi. That was all the energy should could muster for defense right now.

In front of the ferocious Tae Mu-Kang, the defensive chi that Eun Han-Seol had worked so hard to accumulate shattered like glass, sending her flying while screaming. She crashed into the ground like a broken doll and lay there, unmoving.

“HA-SEOL!” shouted Jin Mu-Won, his eyes popping out of their sockets. Eun Han-Seol’s crumbled body could be seen clearly reflected in the corneas of his eyes.

“Han-Seol…Han-Seol…” He crawled over toward her, calling her name over and over again, but Tae Mu-Kang stopped him by stepping on his left arm.

“ARGHHHHHH!” he screamed as the bones in his left arm were crushed.

Tae Mu-Kang looked at Jin Mu-Won’s head vehemently and gathered his chi in his fist.

Tae Mu-Kang’s fist zoomed toward Jin Mu-Won’s head. Just as the young man’s head was about to be smashed like a watermelon, a woman roared, “CHAOS DEMON!”

A silvery-white storm of chi, so cold that the water vapor in the air was frozen into ice, swallowed Tae Mu-Kang.

Tae Mu-Kang was knocked backwards, like he had just been hit by a giant hammer. He fell to the ground rolling, a layer of ice forming on his chest.

With bloodshot eyes, Jin Mu-Won stared at the newcomer who had attacked Tae Mu-Kang.

It was a woman who appeared to be in her thirties, with blue-black colored hair. She exuded an aura of an untouchable, absolute being. Even the air seemed to hold its breath around her.

She turned around to look at Eun Han-Seol.

Seeing her disciple’s heavily wounded state, the woman’s blood boiled with rage. In stark contrast to her burning anger, the temperature of her surroundings decreased drastically.

The frozen air spread out around the woman, forming concentric circles of ice.

Her name, was Seo Geum-Hyang.