“Ugh!” groaned Jin Mu-Won, opening his eyes. The first thing he saw was Seo Geum-Hyang staring down at him, but he was pinned under a collapsed pavilion and couldn’t move.

When he noticed the killing intent in Seo Geum-Hyang’s eyes, he couldn’t help but smile bitterly. For some reason, everyone he had met recently wanted to kill him. It was so absurd that he wanted to laugh.

However, Seo Geum-Hyang only found his smile all the more infuriating. She growled, “Are you mocking me?”

“Do you…think that’s even possible?” Jin Mu-Won moaned, expanding his senses and observing his surroundings. He searched for Tae Mu-Kang’s presence, but could not sense him anywhere in the Northern Army Fortress.

“Hmph, he ran away,” said Seo Geum-Hyang, an unpleasant look on her face. Tae Mu-Kang’s escape was an insult to her pride.

During their final clash, Seo Geum-Hyang’s Moonlight Chakras had dealt fatal blows to Tae Mu-Kang’s shoulder and stomach. If a normal person had gotten that kind of wound, they would most certainly have died on the spot. However, Tae Mu-Kang was not a normal person.

Even with those grievous wounds, he could still run away. Seo Geum-Hyang had attempted to pursue him, but her previous injuries had not yet fully healed.

Furthermore, the remaining four Gray Wolves of Chaos had gotten in her way in order to buy time for Tae Mu-Kang. While she was busy killing them, Tae Mu-Kang disappeared. Regrettably, the threat to hers and Eun Han-Seol’s life hadn’t been eliminated.

Well, he won’t be recovering from the wounds that he received from the Moonlight Chakras. I doubt he’ll survive for much longer.

The Moonlight Chakras might be demonic weapons, but they were also the perfect foil to Tae Mu-Kang’s murky chi.

Now, to deal with the other problematic one…

After being injured by both my Moonlight Chakras and Jin Mu-Won, the possibility of Tae Mu-Kang surviving is zero. However, the fact that I didn’t defeat him using my own power, and had to rely on weapons, is disgraceful.

The last Lord of the Northern Army, Jin Mu-Won, is a problem.

Everyone had thought that he was a tiger cub which had lost its claws. However, Tae Mu-Kang’s wounds proved that he was no harmless cub, but a full-grown tiger with sharpened claws.

He must be killed immediately, before he becomes even stronger.

The worst thing is, my successor, Eun Han-Seol, seems to have fallen in love with him? That absolutely cannot be allowed. The Heart of the Silver Soul cannot be mastered without abandoning one’s emotions.

Seo Geum-Hyang gathered her chi. The best time to kill Jin Mu-Won was right now, while he was heavily injured.

Seo Geum-Hyang ignored her disciple and raised her hand to strike, but because she had hesitated for a moment, Eun Han-Seol managed to squeeze her tiny body in between her and Jin Mu-Won. 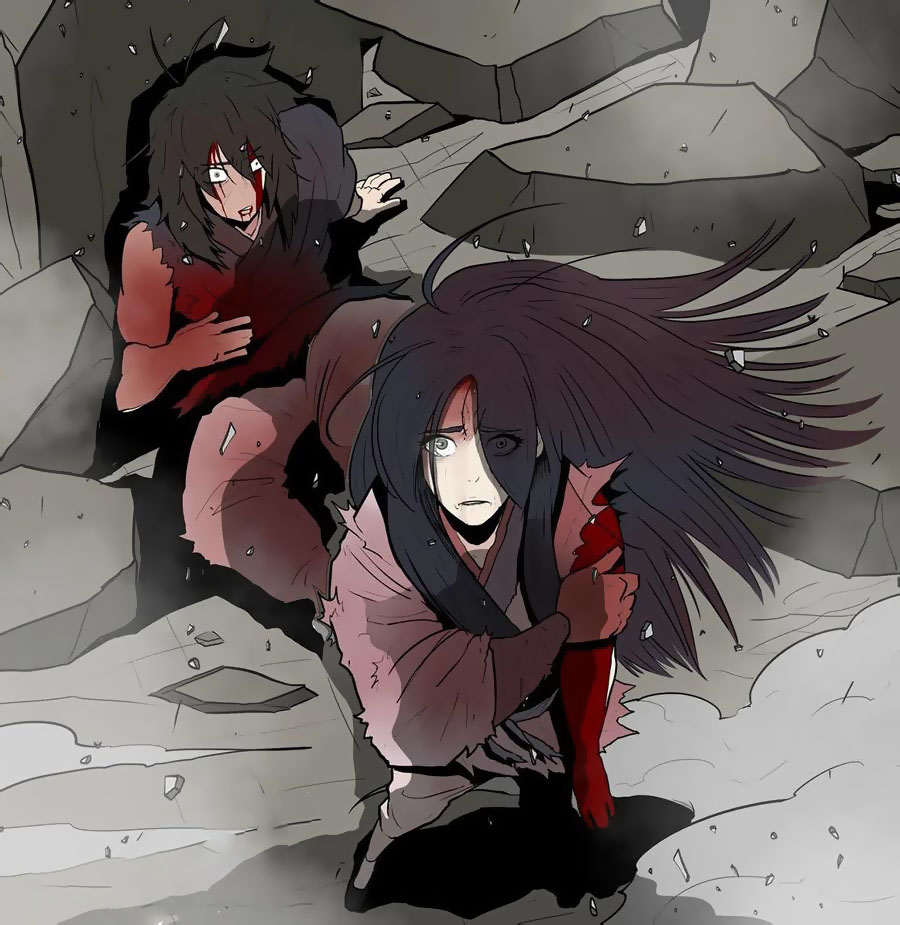 Even though her own body was on the verge of collapse, Eun Han-Seol held her arms out to the side to protect Jin Mu-Won.

Her face was pale, her lips were dry, and she was having difficulty breathing. She was only conscious due to the effects of the Pill of the Supreme Gods. She knew that if she continued pushing herself like this, she might never recover fully. Even then, her desire to protect Jin Mu-Won trumped her concern for her own well-being.

Seo Geum-Hyang looked like she was about to go ballistic. She roared, “You dare get in my way!?”

“Move it, Han-Seol. He is a descendant of the Northern Army, our most hated enemy.”

“What? Do you know what you’re saying!?”

Seo Geum-Hyang’s killing aura intensified.* A mere disciple dares to disobey me, her master? The Eun Han-Seol I knew would never do this. She only became like his because of Jin Mu-Won’s influence.*

“Are you defying me, your master?”

Eun Han-Seol knelt down and prostrated herself, her forehead touching the ground.

The skin on Eun Han-Seol’s forehead tore and blood began to flow out. Still, she refused to budge.

Seo Geum-Hyang was livid. Eun Han-Seol’s condition was critical, and she needed immediate medical attention from an expert. Her disciple should also be aware of this fact, and yet, she had chosen to protect Jin Mu-Won over her own life.

Perhaps I should erase her memory.

A long time ago, she herself had once knelt before her own master like this. That memory had now faded, but somehow, she felt as if she could see her former self overlapped with the current Eun Han-Seol.

Seo Geum-Hyang looked at Jin Mu-Won. Similar to her disciple, there was unyielding determination in the young man’s eyes, but his gaze was focused only on Eun Han-Seol.

She sighed, “Fine, I will not kill him.”

“In exchange, you will begin training using the ‘Ice Crystal Silver Light Technique (氷晶銀光大法)1’. Is that understood?”

The Ice Crystal Silver Light Technique could help Eun Han-Seol master the Heart of the Silver Soul within a very short time, but the risk of dying from it was also extremely high. Before today, Seo Geum-Hyang had kept delaying this type of training in order to increase her disciple’s chances of survival. However, her disciple now needed to be punished severely for her actions.

Seo Geum-Hyang stormed off. She was extremely upset, but she knew that her disciple wished to bid farewell to Jin Mu-Won.

Jin Mu-Won lay in the middle of the ruins. He tried his hardest to get up, but he still couldn’t lift a finger.

“You look terrible. Ha…ha!” Jin Mu-Won laughed bitterly, but suddenly, Eun Han-Seol placed her arms around his neck and embraced him.

He closed his eyes, trying to engrave the warmth and fragrance of her body into his memories.

Eun Han-Seol whispered, “I have to go now.”

“I know.” Jin Mu-Won nodded.* As much as I hate it, I have to say goodbye. The way I am right now, I can’t possibly protect Han-Seol. If her master hadn’t appeared in time, she would have died today.*

If only I wasn’t this weak, she would never have gotten hurt!

Eun Han-Seol could feel the man in her arms trembling. She instantly understood what he was thinking, and said, “Please don’t blame yourself. We both knew that this day would come sooner or later.”

“Okay.” Eun Han-Seol nodded, then let go of Jin Mu-Won. She stood up and limped toward her master.

Jin Mu-Won watched her go with bloodshot eyes. He finally managed to raise a hand and reached out for her, but when he closed his fist, there was nothing in his grasp.

Just then, Eun Han-Seol looked behind her, saying, “Mu-Won, no matter how much I change in the future… Please don’t hate me.”

“I could never hate you!”

Eun Han-Seol beamed happily, then fainted. Sa-Ryung picked her up and carried her on their back.

Seo Geum-Hyang glared at Jin Mu-Won and sternly said, “Last successor of the Northern Army, I’m warning you. Never show yourself in front of that child ever again. I pray you won’t forget my advice.”

Before Jin Mu-Won could reply, Seo Geum-Hyang spun around and left. Sa-Ryung followed right behind her.

Jin Mu-Won watched them go in a daze. Only when they had completely vanished from sight did he grit his teeth and swear to himself, “I will definitely become even stronger.”

I now have yet another reason to become stronger!

In his aching heart, Jin Mu-Won cried tears of blood.