*Liken my body to a tree. Let my chi be the water, my Spirit Palace the roots, my Upper Pillar the trunk, and my Hundred Meetings the branches and leaves. *

As long as I believe with all my heart that something is real, even an illusion can turn into reality. The forces of nature will follow my heart’s desires.

Seo Mu-Sang opened his eyes. A light briefly flashed within them

Recently, his martial arts had improved dramatically. He had been getting better every single day, so much so that the Seo Mu-Sang of a few days ago was incomparable to the current Seo Mu-Sang. His formerly obstructed chi channels were now completely unblocked, allowing his chi to flow smoothly and continually within his body.

For the longest time, Seo Mu-Sang had desperately longed to get stronger. His thirst for power combined with his new insights complemented each other, resulting in an unbelievably rapid rate of growth.

After finishing his training, he relaxed and savored the pleasure of progress.

At my current level of strength, I don’t think I would lose to Yeop Wol even in an all-out fight. However, I cannot be careless.

Regardless of how much my martial arts have improved, my status as an external affiliate of Heaven’s Summit remains unchanged. On the other hand, Yeop Wol has the support of Shim Won-Ui.

I must be patient. Revenge is a dish best served cold. One day, I will repay all the grievances I have suffered.

If there was anything Seo Mu-Sang learned after coming to the Northern Army Fortress, it was patience. As long as one was patient enough, an opportunity would surely arise eventually. Conversely, impatience and recklessness would only lead to self-destruction.

Suddenly, he thought of Jin Mu-Won.

For the last three years, I have been watching him closely. Although his situation is several times worse than mine, he never despairs or gives up on himself.

At first, I attributed this behavior of his to emotional detachment, but on closer inspection, I realized that that wasn’t the case at all. Jin Mu-Won’s patience, restraint, and self-control are second to none.

Seo Mu-Sang lifted his head, looking up at the sky.

Could it really have been him?

Over the last few days, an absurd idea had taken root in his mind. Was Jin Mu-Won really the mysterious person who had saved him from the brink of insanity that fateful day?

This conclusion was not completely unfounded, it was the result of logical deduction.

Technically, the only martial artists skilled enough to have advised him were Shim Won-Ui and the Wardens under him. Although Dam Soo-Cheon was a prodigy, it could not have been him as he hadn’t arrived at the Northern Army Fortress until after Seo Mu-Sang had reached Transcendence.

Once I’ve eliminated the impossible, whatever remains, however improbable, must be the truth! It could only have been Jin Mu-Won!

Is what he said really correct? Actually, is that kid even skilled enough to teach me?

Seo Mu-Sang shook his head. This conclusion of his was far too outrageous to be true.

If he’s that strong, why did he let himself be subject to so much pain and suffering?

Seo Mu-Sang recalled how Jin Mu-Won was captured and tortured by Jang Pae-San. Back then, he had personally confirmed that Jin Mu-Won did not know any martial arts. Thus, he was all the more confused.

Suddenly, a voice snapped him out of his thoughts.

“The captain ordered us all to assemble.”

“He said that there was something he had to tell us.”

Seo Mu-Sang furrowed his brows. After meeting with Shim Won-Ui, Jang Pae-San had become the young man’s dog, ready to even give up his own life for his master’s sake. In addition, the rest of the Third Company had also sworn their loyalty and were now at Shim Won-Ui and Jang Pae-San’s beck and call.

I wonder what he’s going to talk about today. This is so annoying…

Having gotten a strong impression of both Jin Mu-Won and Eun Han-Seol, Dam Soo-Cheon left the smithy. The two left behind remained silent for a while.

In particular, Eun Han-Seol was still struggling to recover from the inner turmoil in her heart. Dam Soo-Cheon’s presence had hit her like a ton of bricks. She finally understood what Sa-Ryung had meant when they praised Dam Soo-Cheon.

I still can’t believe that such a man exists.

Even though I know that he’s not doing it on purpose, his aura and presence are still suffocating. Just being in the same generation as this man has ignited my competitive spirit.

Eun Han-Seol took great pride in her martial arts. Not only was she the successor to one of the most powerful martial arts in the world, her personal achievements were also outstanding.

She had been confident that few among her peers would be able to defeat her. However, that was before she had met Dam Soo-Cheon. Dam Soo-Cheon had shown her just how arrogant she had been.

I knew that there had to be a good reason for Sa-Ryung’s unusual behavior when they spoke of Dam Soo-Cheon. He is the first person ever to have rattled my self-confidence so severely.

Suddenly, she looked at Jin Mu-Won. He was absentmindedly holding a teacup and looking out the window, deep in thought. She figured it was because he was just as shaken as she was.

Just then, Jin Mu-Won turned around to face her. The instant she looked into the calm depths of his eyes, all her worries were instantly washed away like waves crashing on the beach.

I was wrong. Unlike me, he’s not flustered at all. Instead, his air of serenity is so soothing…

Jin Mu-Won smiled and asked, “Did you come here because of me?”

“You came rushing here because you were worried that I’d get hurt again, right?”

“Exactly… No, don’t get the wrong idea.”

“Pfft!” Jin Mu-Won laughed, then suddenly took out a small wooden box and held it in front of Eun Han-Seol.

Eun Han-Seol took the box from him and carefully opened it.

“Huh? This is?” Her eyes widened in surprise.

Inside the box, a delicate flower bloomed, its silvery-white petals seemingly teeming with life. It was so realistic that she wouldn’t be shocked if bees and butterflies were attracted to it.

It was a flower-shaped silver hair accessory. 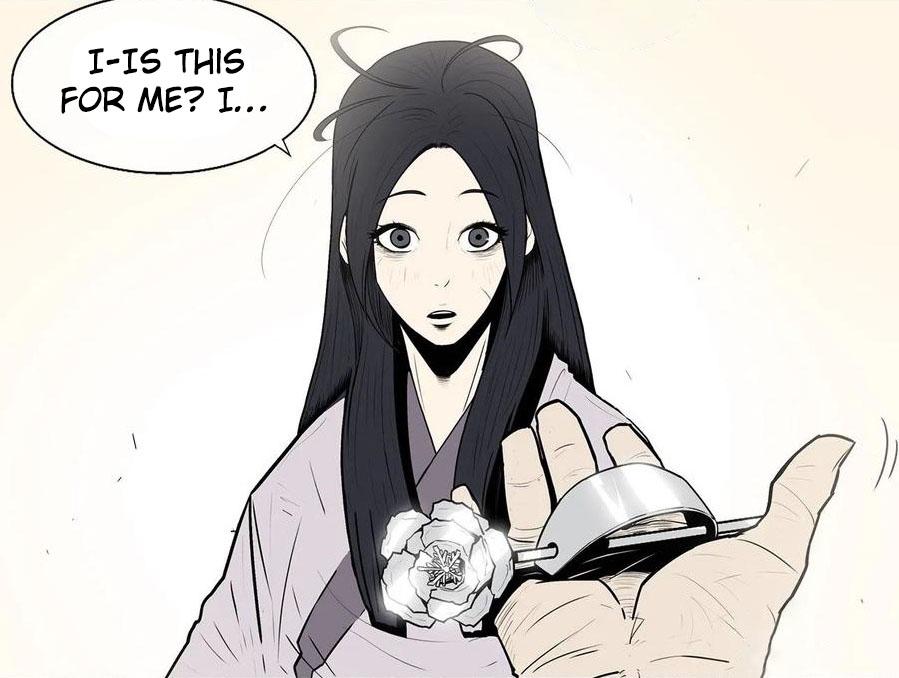 Jin Mu-Won nodded, saying nothing. This was the gift that he had been laboriously working on until right before Dam Soo-Cheon’s arrival.

Eun Han-Seol immediately lowered her head, tears welling up in her eyes. She clasped the hair accessory tightly like it was the most precious of treasures.

This is the first gift I have ever received.

“Do you want to try wearing it?”

“It suits you beautifully.”

“Thank you so much!”

“I made it in a hurry, so please forgive me if it’s a little crude. I really wanted to give you something before you left,” Jin Mu-Won said sincerely. A few days ago, when he heard that Eun Han-Seol would be leaving soon, he had felt an odd sense of loss, like his heart was being cut open.

It was only then that he realized just how much she meant to him. He was helpless to stop her from leaving, but he wanted to give her a present at the very least. Thus, he decided to make her an accessory.

This steel flower was the most intricate piece he could make within the short timeframe of a few days. He had poured his heart and soul into making it the best he could.

When we first met, I had no idea that she would eventually come to occupy a special place in my heart. What little time we have left together seems all the more precious.

If only I was stronger… I would never let her go! I would definitely think of some way to keep her beside me.

However, that is impossible for the current me. I don’t even know if I will still be alive tomorrow. That’s why I can’t selfishly force her to stay with me.

Eun Han-Seol took the flower out of her hair and held it tightly in both hands.

This is the first gift I have ever received in my life, and it was Mu-Won who gave it to me!

That night, Eun Han-Seol couldn’t sleep. The flower accessory that Jin Mu-Won had given her was still in her hands. She had fiddled around with it so much that it had already gotten a little dirty.

She gave up trying to fall asleep and opened the windows, letting the cold air outside into the room. She took a few deep breaths and immediately felt more awake.

She stared blankly at the accessory that Jin Mu-Won had given her. Like a real flower, each and every petal was unique and vivid.

It was as if the flower was trying to tell her just how much effort Jin Mu-Won had put in to make it.

“Mu…Won,” she mumbled. Her face turned red, and her heart was thumping furiously.

What are these weird feelings? I don’t really understand it, but it doesn’t feel bad.

Suddenly, she sensed a presence approaching. The emotion disappeared from her face as she quickly gathered her chi in her hands.

A person soundlessly appeared in her room. When she saw the androgynous figure of the newcomer, she smiled welcomingly and said, “Sa-Ryung, you’re back!”

“Young Mistress!” cried Sa-Ryung, kneeling down in front of her.

Eun Han-Seol stood up and quickly asked, “Did something happen? Why are you back so soon?”

“No, nothing happened,” replied Sa-Ryung, shaking their head.

“The Madam ordered me to inform you that she will be coming to pick you up soon.”

“I don’t know the details, but it shouldn’t be that surprising to you, right?”

Just then, Sa-Ryung’s gaze turned toward the accessory in Eun Han-Seol’s hands.

Eun Han-Seol quickly shoved the hair accessory into her breast pocket. Sa-Ryung stared at her suspiciously, but Eun Han-Seol continued acting as if she had merely set aside something trivial.

Sa-Ryung harshly scolded, “Always remember that you are our hope, Young Mistress. You are not allowed to get emotionally involved with others.”

“…I believe you,” said Sa-Ryung in a slightly gentler tone.

Half a day after Sa-Ryung left, their expression suddenly turned ugly. Their red lips, hidden beneath the black hooded cloak, twisted in a terrifying manner.

The change in Eun Han-Seol’s behavior had not escaped their notice. After all, they had watched over her since she was young and understood her even better than she understood herself.

From Sa-Ryung’s lips, came the sound of grinding teeth.