Jin Mu-Won was taking a walk outside of the Northern Army Fortress. He raised his head and looked up at the sea of stars blanketing the night sky. The stars appeared so close, it was as if they were within arm’s reach. He stretched out a hand to grasp the stars, but when he closed his fist, it was empty.

He smiled bitterly. Thanks to Eun Han-Seol, he had laughed and smiled more in the last few days than he had in a very long time.

Whenever he saw her, he couldn’t help but smile. The time they spent together always passed by in a flash. However, the moment he remembered that they would have to part ways soon, his heart would sink.

Suddenly, Jin Mu-Won sensed a slight discrepancy in the flow of chi.

He narrowed his eyes and focused his senses. Someone was approaching him quickly and silently like a fog. If it weren’t for the barely perceptible aura emanating from that person, he wouldn’t even have noticed them. Furthermore, if he had to describe the aura he was sensing, he would liken it to a poisonous snake.

Who could it be? Shim Won-Ui?

Jin Mu-Won shook his head. There was no reason for Shim Won-Ui to personally sneak up on him. Similarly, neither Dam Soo-Cheon nor Seo-Moon Hye-Ryung would come after him either.

The mysterious intruder sneakily circled around Jin Mu-Won like a lynx observing its prey.

Oddly, even though he could tell that his opponent was many times stronger than him, Jin Mu-Won did not feel afraid. Instead, he was thrilled. Although the intruder was a master of stealth, and was completely invisible to the naked eye, Jin Mu-Won could still feel his presence.

Is this because of the Shadow Space? 1

That’s the only possible reason I can think of. Also, I feel that my senses are sharper in the darkness than in the light. That’s weird.

Anyway, this person is observing me to see if I noticed them.

Jin Mu-Won broke out into a cold sweat. Simply being able to sense someone’s presence, and being able to react to them in time were two different things. Moreover, he had no idea who the intruder was.

If this intruder is a scout sent by Shim Won-Ui or Dam Soo-Cheon, then I will not be able to use any martial arts. After all, the only reason I am still alive is because they are convinced that I am a normal person.

Jin Mu-Won clenched his teeth. This was not the time to reveal his martial arts. He couldn’t let all his effort go to waste.

Well, it’s not like I have a choice anyways. For me, there is only one path to survival.

I must be patient.

No matter what happens, I must be patient!

Jin Mu-Won waited for the intruder to make the first move. He was so nervous that all the muscles in his body tensed up and his hair stood on end. He could feel the intruder’s presence getting stronger and stronger, until even a normal person would notice it.

Still, something was off here. Even though he was completely defenseless right now, the intruder hadn’t attacked him yet, only made their killing intent known.

It seems their aim is to observe me.

In that case, they were definitely not sent by Shim Won-Ui. Knowing that man, he wouldn’t bother trying the exact same scheme a second time.

It’s not one of Jang Pae-San’s men either. Those guys are incapable of such high-level martial arts.

Jin Mu-Won considered several possibilities, but ended up rejecting them all.

Hmm… What if they’re not from Heaven’s Summit?

Suddenly, the name of a person came to mind.

Could it have something to do with Han-Seol?

She is the only person inside the fortress with an unknown background. Of course, I know she is not the one responsible, because I have confirmed that her feelings for me are real.

Besides, while there are similarities between the intruder’s aura and Han-Seol’s, they are not exactly the same. Rather, the intruder probably practices the same martial art as Han-Seol.

That’s the feeling I get, anyway.

He had no proof, but Jin Mu-Won was absolutely convinced that his theory was correct.

Just then, he felt a burning sensation on his skin. The intruder’s murderous intent had gotten even stronger.

They’re deliberately revealing themselves to me!

If the intruder wanted to kill him, he would already be dead. He was unarmed and too weak to resist. However, all that person did was hide in the shadows and watch him.

I see… So their goal was to threaten me.

I don’t know why they’re doing this, but even an idiot could deduce that Han-Seol is somehow involved.

While Jin Mu-Won was deep in thought, a gentle breeze brushed against his cheek, bringing with it a light fragrance that tickled his nose.

He frowned. The intruder’s presence had disappeared with the wind, and he hadn’t sensed them leaving at all.

The instant he let go of the breath he had been holding, Jin Mu-Won stumbled and fell to his knees. His clothes were soaked with sweat and his legs were trembling. He took a deep breath to calm himself.

Never…will I forget this feeling of utter humiliation!

To the intruder, it might have been a simple, effortless threat. However, Jin Mu-Won did not see it that way. He saw it as nourishment for his growth.

That was not so much a threat as it was a reminder; a stern reminder that I must never stop moving forward!

A man was choking on his own blood. There was a thick, muscular forearm sticking out of his chest. He mustered all his energy to look up at the face of the executioner standing in front of him.

The giant of an executioner had a tough body that reminded one of granite and unkempt hair that covered his face. He wore a gray robe that was so torn and tattered, it looked like it would be blown away by the strong wind. In between the messy strands of hair, the man caught a glimpse of red eyes sparkling with the light of insanity. 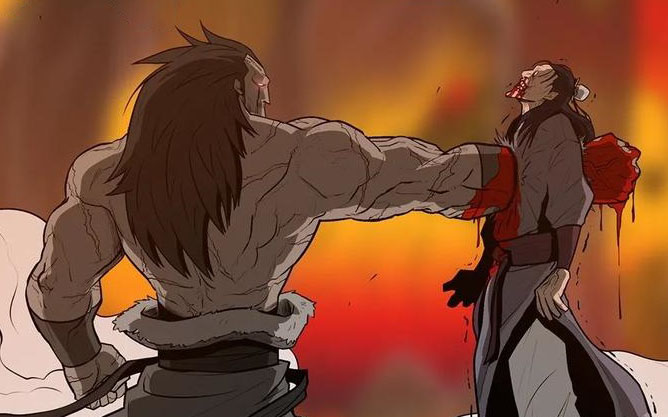 The executioner called the Chaos Demon did not reply and proceeded to lift the arm that he had pierced the man with. He looked at the man curiously as he wiggled his legs in the air, painfully trying to break free.

The dying man had been the embodiment of a heartless warrior. He was strong, smart, and resolute. The light of life in his eyes had been brighter than anyone else’s, but in the face of death, that light was slowly fading away.

When the man looked into the Chaos Demon’s eyes, all he saw was a psychotic monster observing him like he was just a weird plaything. This terrifying revelation left him paralyzed with fear.

Some time later, the man’s body shuddered, and he exhaled his last breath. The Chaos Demon immediately flung the corpse aside with one swift movement, having lost interest in this toy.

“This is no fun. I thought that he would try to struggle a little more,” complained the Chaos Demon, the madness gradually fading from his eyes.

He scratched his head and looked around him. Everything in his surroundings had been smashed into pieces and then burnt into ash. Nothing had been left intact. Judging by the ghastly scene, he could tell that his enemies had died horrible deaths.

All this destruction had been the work of him and him alone.

He was the best tracker, hunter, and executioner of all. However, whenever he went berserk, he would completely lose it and annihilate every living being in his vicinity.

It was for this reason that the man named Tae Mu-Gang was given the moniker “Chaos Demon”.

Just as Tae Mu-Gang was starting to get bored, he was approached by a group of about a dozen gray-uniformed warriors with auras similar to his own. Like himself, these warriors looked like they had taken a shower in the blood of their enemies.

They were the Gray Wolves of Chaos, the warriors that served him.

Since they had all received his taint of insanity, he was the only one they took orders from. Without him, they would instantly go out of control and turn into crazed beasts.

One of the Gray Wolves bowed to him, saying, “We have finished cleaning up the trash, Leader.”

“Where are we going next?”

“That is where the girl is hiding.”

“I suppose that’s only to be expected. Not many places for an injured rat to hide, after all,” said Tae Mu-Gang, the corners of his lips curling up into a smirk.