Jin Mu-Won clenched his teeth. Ever since the moment he had locked eyes with Dam Soo-Cheon, the energy that he had been suppressing till now had been gradually spiraling out of control. His heart was racing with excitement as if someone had thrown a rock into a still pond.

Dam Soo-Cheon had lit a fire in his heart.

I’ve never been so worked up in my life. It seems that being part of the same generation as a warrior like Dam Soo-Cheon has made my blood boil with anticipation.

He raised the blade and held it in front of him.

As if he were staring Death in the eye, his expression turned serious.

In the darkness of the training room, he imagined Dam Soo-Cheon standing right in front of him. The sight of Dam Soo-Cheon fighting against the three assassins had left a strong impression on him, and he used his memory of the battle to incorporate every detail about the man into his mental image.

He pointed the sword at Dam Soo-Cheon’s forehead. Seeing this, the Dam Soo-Cheon in front of him smiled mockingly, taunting him.

He was painfully aware of his own strength. Right now, he was no match for Dam Soo-Cheon, not even close. If martial arts were a marathon, then Dam Soo-Cheon would have had a large head start on him, running straight down the beaten path. On the other hand, he was still standing at the starting line.

He swung his sword at the illusion of Dam Soo-Cheon.

Jin Mu-Won slashed horizontally, then upwards. He thrust his blade forward, followed closely by a diagonal chop. His footwork was like water, flowing naturally around the entire training room unhindered.

However, the frustration on his face betrayed his true feelings. His imaginary opponent, Dam Soo-Cheon, never allowed the sword to graze him. He simply looked down on Jin Mu-Won like he was a mere insect.

This is my turf.

How many times have I swung my sword in this very room? How many wooden swords have I carved? Even when my fingernails fell off and the skin of my palms tore, I continued training right here, in this space I’ve created for myself!

Not to mention, it was also here that I made my decision to sharpen my blade in preparation for the future.

And yet, it is only now that I understand how complacent I’ve been. The heavens have shown me that by erecting a wall in front of me.

A colossal wall by the name of Dam Soo-Cheon!

Sometime later, Jin Mu-Won left the training room. He closed the door behind him and moved some furniture in front of it. When he was done, the door had been completely hidden. It was a simple, but extremely effective, setup. Unless one already knew that there was a door there, they would think that it was just another normal wall. Concealing the location of the training room also allowed him to train to his heart’s content without worrying about spies.

Jin Mu-Won headed for the smithy. He had lit up the furnace last night to melt a lump of steel, and it was now ready for shaping.

He deftly hammered the metal again and again, forgetting about the passage of time. So intent was he on molding it into the shape he envisioned. This new work of his was far more intricate and delicate than anything he had ever worked on before.

Many hours later, Jin Mu-Won finally finished his newest masterpiece. He placed the object in a wooden box that he had prepared beforehand.

Suddenly, he looked up abruptly and turned to face the doorway, a strange expression on his face.

He saw a young man with hair like a lion’s mane leaning against the door. Who else could it be but Dam Soo-Cheon?

Jin Mu-Won put down the wooden box in his hands. He asked, “Erm…why are you here?”

“I came here to thank you.”

Dam Soo-Cheon walked towards Jin Mu-Won. With every step he took, an immense aura seemed to pour out of him.

When martial artists reached a certain level of mastery, they gained the ability to control their own aura. Dam Soo-Cheon had most certainly reached that level, but it was clear that he had no intention of hiding his presence. He was just that confident in himself.

Although Jin Mu-Won felt pressured by the aura, he did not shrink back. This was because he did not sense any killing intent from Dam Soo-Cheon.

Dam Soo-Cheon stopped a short distance away from Jin Mu-Won. He clasped his hands together in a fist salute and lowered his head slightly, saying, “Thank you for letting us stay here even though we didn’t ask for your permission. It has always been my dream to visit the Northern Army Fortress.” 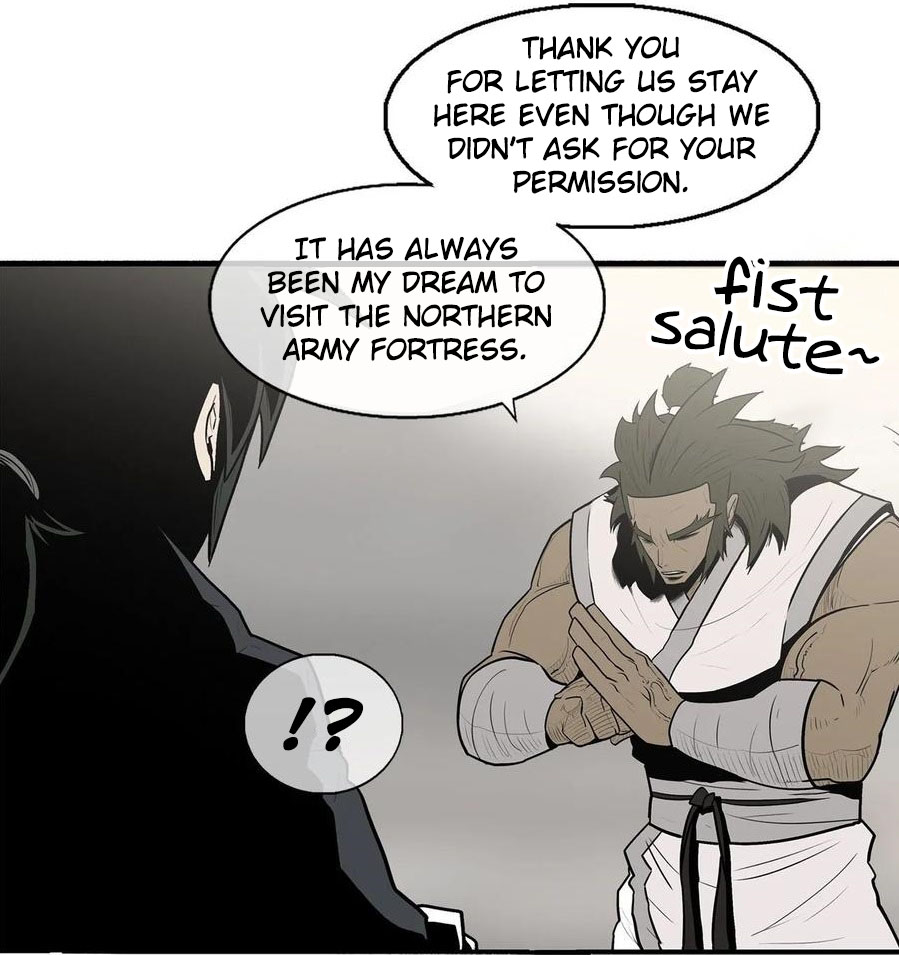 “I hope you weren’t disappointed. After all, there is nothing here but abandoned ruins.”

“No, there is something. A man who has inherited the will and spirit of the Northern Army.”

“Are you sure you’re not mistaken? There is no way a normal person like me can inherit all that, you know?

“Hahaha!” laughed Dam Soo-Cheon. Like his aura, even his laughter exuded confidence.

The Northern Army is a very distinguished faction.

For more than a hundred years, they stood at the frontlines of the war against the Silent Night. Their true capabilities cannot be determined from mere material possessions like this fortress or its treasury.

In the end, what makes a faction strong, are the people.

It is common for the first generation of a new faction to be successful. However, it is not easy for that success to be passed down to future generations.

As time passes, the foundations laid by the first generation will wane and be forgotten. When these foundations have been completely lost, most factions will cease to exist.

Only those who could pass their teachings and principles down to the next generation can survive, and only those that have survived for several generations have the right to call themselves distinguished.

Looking at it this way, the Northern Army definitely belongs to the ranks of the distinguished. Every single generation has devoted itself to its original purpose of defending against the Silent Night. The pride of the Northern Army is based on their extraordinary tenacity and unshakable resolve, even more so than any other faction.

Despite knowing this, I was still extremely shocked the first time I locked gazes with the man named Jin Mu-Won. No one else has ever remained that calm after meeting me for the first time.

I don’t know if he has inherited the true legacy of the Northern Army, but that isn’t important. What’s really important, is the fact that he can stare me directly in the eye without cowering. Just that fact alone is enough to tell me that this person isn’t normal.

Thus, there is one thing I can be absolutely sure of.

This man, Jin Mu-Won, has inherited the unyielding will of the Northern Army.

To Dam Soo-Cheon, it didn’t matter whether the inheritance was tangible or not. Even if Jin Mu-Won hadn’t learned any martial arts, he still possessed the indomitable spirit of the Northern Army. There was nothing more inspiring to him than that simple fact.

Since childhood, I have held the Northern Army in the highest regard.

The sheer fighting spirit and tenacity needed to fight a war against the Silent Night for over a hundred years is nothing if not admirable.

That’s why I had to come here no matter what.

The place where I take the first step to achieving my dream can only be right here in this very fortress!

Dam Soo-Cheon’s gaze swept around the smithy. It was crude, but it gave him a feeling of sturdiness. Like it was stubbornly hanging on even though it didn’t have much.

Is it because this is a smithy?

*The atmosphere in this smithy revolves around the man at its center, Jin Mu-Won. It is this person that gives life to the structure, that turns the stale air of the ruin into an expression of his obstinacy. Perhaps even he himself hasn’t noticed how his presence is changing the desolate atmosphere of this ruin into something greater. *

All in all, I’m really glad I came here.

My original reason for coming to this fortress was to bask in the spirit of the Northern Army, and bask in that spirit I did, even though the way it happened was different from what I expected. I don’t know if Jin Mu-Won will become my enemy in the future, or if he will walk the same path as me, as a friend. Still, just being able to meet him makes my trip here worth it.

Suddenly, Dam Soo-Cheon’s eyebrows twitched. He sensed that someone was behind him.

He turned around and looked at the entrance to the smithy. There, he saw a petite girl of about fourteen years of age.

She had dark eyes, pale skin, and black hair tinged with a hint of blue. Dam Soo-Cheon could clearly see the wariness in her eyes, but like Jin Mu-Won, she wasn’t afraid of him.

This girl isn’t normal either!

Eun Han-Seol walked forward and stood next to Jin Mu-Won as if she was his protector.

An eerie stillness filled the smithy.

The tension between Eun Han-Seol and Dam Soo-Cheon was suffocating, like two beasts ready to spring into action.

Just then, Jin Mu-Won intervened, saying, “Since you’re here, how about a cup of tea?”

The tension broke in an instant. Both Dam Soo-Cheon and Eun Han-Seol nodded unthinkingly.

Jin Mu-Won smiled and went to brew the tea, with Eun Han-Seol staying by his side. It seemed that she was trying her best to protect him.

“Would you mind telling me your name, Young Miss?” asked Dam Soo-Cheon.

“I see. My name is Dam Soo-Cheon. I will remember you.”

Eun Han-Seol frowned but did not say anything. She only had eyes for Jin Mu-Won, anyway.