Jin Mu-Won laid out the breakfast table. He had a feeling that Eun Han-Seol would be coming over for breakfast, so he cooked a pot of mutton stew and fried a plate of her favorite pork cutlet in preparation for her arrival.

When Eun Han-Seol showed up at the door, Jin Mu-Won smiled.

“You haven’t been preparing an extra portion of food every meal, have you?”

“No, I just felt that it was about time you got hungry.”

Eun Han-Seol sat down at the table and observed Jin Mu-Won. His face was still rather pale.

In truth, Jin Mu-Won could heal himself almost instantly using the Art of Ten Thousand Shadows. However, he chose not to do so because healing too quickly would rekindle Shim Won-Ui’s suspicions.

For this same reason, he could not continue training or swordsmithing either. Instead, he spent his time reading or contemplating philosophy, often becoming absorbed in his own world.

Countless thoughts flashed across his mind, clashing and intertwining with each other to form entirely new ideas. Jin Mu-Won did not attempt to control the direction of his thoughts, he simply let it flow naturally like water.

Unexpectedly, this decision of his invoked thoughts and ideas that he had never even considered before. As the random concepts in his head piled up, they began to connect together and organize themselves, finally coming together as a whole.

In just a few days, Jin Mu-Won felt that he had taken yet another significant step forward. His understanding of the world had deepened, and as a result, his sixth sense had sharpened as well.

It was this sixth sense that had told him Eun Han-Seol would be coming over in the morning, and true enough, she showed up right after he finished preparing breakfast for her! This precognition of his was now so absurd, even Jin Mu-Won was flabbergasted. 1

He felt that this ability definitely had something to do with the Art of Ten Thousand Shadows. He wasn’t sure why it was like that, but practicing the Art had indeed expanded his insight and perception to an unbelievable extent.

Eun Han-Seol focused all her concentration on moving her chopsticks, tasting one dish after another. She then nodded in approval and exclaimed, “Yum…”

Eun Han-Seol’s reactions to the food made Jin Mu-Won smile. She was a lot more expressive than when he had first met her. Back then, she was like a lifeless, emotionless doll. Right now, though, that doll had come to life, becoming bright and animated.

She was especially lively when it came to food. Whenever she ate something good or bad, it would be written clearly all over her face. Jin Mu-Won felt that this was the biggest change that had occurred in her.

Eun Han-Seol put a piece of pork cutlet in her mouth and chewed.

However, Jin Mu-Won seemed to not notice this, remarking, “That’s a relief.”

“I was starting to get worried because you seemed to have lost your appetite recently.”

Jin Mu-Won filled Eun Han-Seol’s plate with fried pork cutlet. She lowered her head and stared blankly at the plate for a while.

No one has ever cared about me as much as he does. Not even my Master, who raised me since I was young.

Suddenly, she lifted her head and looked directly at Jin Mu-Won.

This time, it was Jin Mu-Won’s turn to stare blankly at her. She did not avoid his gaze.

“Why… Do I really need a reason to be nice to you?”

“Where I come from, there is a reason for everything.”

Everyone who approached Eun Han-Seol had done so with an ulterior motive. It didn’t matter if their motives were good or bad, only that they desired something of her. Thus, even though Jin Mu-Won’s pure sincerity felt foreign to her, she welcomed it with open arms.

“You must have had a hard life,” said Jin Mu-Won gently.

Tears welled up in Eun Han-Seol’s eyes. She quickly looked down and pretended to eat.

Why am I always like this when I’m together with him? It’s like my emotions are spiraling out of control! It’s weird, and it makes me feel uneasy.

Eun Han-Seol played with her chopsticks for a while, then suddenly said, “I-I might have to leave this place soon.”

Jin Mu-Won’s eyes trembled. He did his best to put on a show of composure.

Sa-Ryung had gone to meet her master. When they came back, she would have to leave the Northern Army Fortress.

“Is that so? I understand.”

I already knew that we would have to part someday. I even prepared myself for it. So…why? Why does my heart feel so empty? Since when did she become so important to me, that I can’t stand the thought of us being apart?

“Please remember to tell me before you leave, okay? Don’t just disappear quietly.”

When Eun Han-Seol had gone, he went to the smithy and began to work on something. 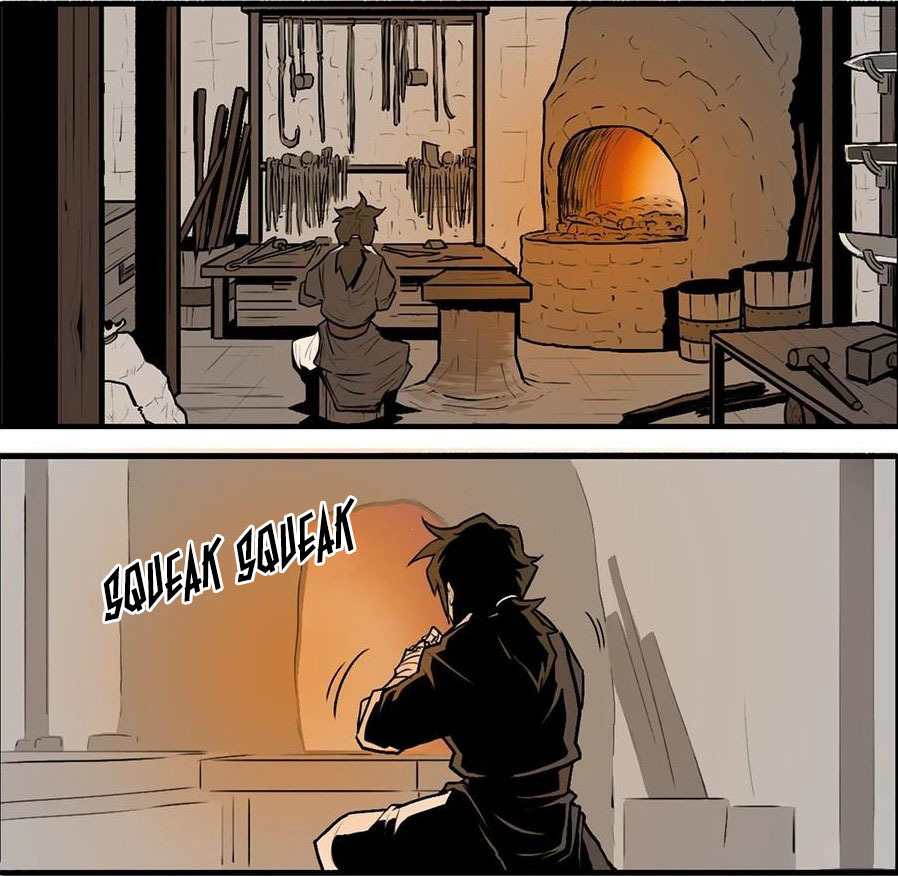 Jin Mu-Won walked out of the Northern Army Fortress, climbed to the top of the nearby hill where he could look down upon the entirety of the fortress, and sat down under a massive tree.

“Haa…” he sighed, leaning against the tree. He had spent the last few days working non-stop inside the stuffy smithy.

He took a deep breath. As the fresh air filled his lungs, vitality returned to his lifeless face.

The fortress had been completely taken over by Shim Won-Ui and his companions, leaving him with very little freedom to move around.

They’re treating the place like their own home, even though I’m the owner of the fortress. These people are such a pain in the ass…

Ahh, screw them. I have more important things to worry about, like…

Recently, whenever he thought about Eun Han-Seol, his heart would start thumping like crazy.

“Is there something wrong with my mental state?”

Jin Mu-Won pondered this thought for a while but quickly rejected the notion. He knew that he was just avoiding the truth because he’d much rather be insane than infatuated.

It wasn’t like there wasn’t a simple solution to his restlessness. He closed his eyes and concentrated on the Art of Ten Thousand Shadows.

His shadow chi flowed through his veins, and his senses expanded out toward the horizon. He could hear the buzzing of bees and the rustling of leaves a dozen miles away. The warmth from the vitality all around him soothed his heavy heart.

Jin Mu-Won’s eyes widened in shock. A unique presence had appeared at the edge of his senses, emitting an immense power that made his hair stand on end. Even the air around that person seemed to shimmer in trepidation.

Jin Mu-Won did not know exactly how strong this person was. The only thing he could be absolutely certain of was that he was no match for this person.

I have to get out of here…

His instincts kicked in, telling him to run away as fast as he could. However, before he could move, he felt a wave of power wash over him as a man made his way up the hill.

The man was six feet tall and donned a large black cloak that billowed out behind him in the strong wind. His indomitable aura rippled through the air like the waves of an earthquake, as if it wanted to crush everything around him to pieces.

Suddenly, he turned around, looking straight in Jin Mu-Won’s direction. Only then did Jin Mu-Won notice the huge scar running across his face.

The instant the two men’s eyes met, Jin Mu-Won’s heart sank. The man looked at Jin Mu-Won, a curious expression on his face.

Jin Mu-Won could clearly see the man’s powerful ambition and unyielding determination in his eyes. It was as if there was a fire strong enough to set the whole world aflame burning within them. Although he felt like his soul had been ignited as well, he did not back down and look away.

This time, it was the man’s turn to be surprised. Never had another person locked gazes with him like this without eventually breaking eye contact.

Since he was young, he had been extremely ambitious. To achieve his desires, he had given it everything he had. This resolve had etched itself into his eyes, turning them into a blade that would cut into the soul of whoever locked gazes with him.

Those familiar with him gave a name to this ability, calling it the “Eyes of Domination”.

Anyone who faced the Eyes of Domination for the first time would undoubtedly feel a sense of danger and look away. It didn’t matter whether they were young or old, strong or weak. The only ones who could endure his stare were those with resolve equal to, or greater than his.

As a result, some called him Dam Soo-Cheon, the gentleman with the eyes of a king looking down upon his subjects.

Others knew of him as Dam Soo-Cheon, the young dragon of the Central Plains, renowned worldwide for succeeding in the Hundred Man Challenge.

But most often, he was known as the lone star illuminating the heavens.

The “Lone Star of the Azure Sky (蒼天孤星)”, Dam Soo-Cheon!

As most of you have probably guessed, Jin Mu-Won is the Tiger and Dam Soo-Cheon is the Dragon.

In East Asian cultures, the Tiger and Dragon are often mentioned together. They are both symbols of authority, valor, and strength, but at the same time, they are polar opposites of each other (Yin and Yang, Fire and Water, Left and Right, East and West).

This reference is most noted in Dam Soo-Cheon’s moniker, “Lone Star of the Azure Sky (蒼天孤星)”, and the Azure Dragon Society (蒼龍會). Hence, I chose to use the word “azure”, instead of “cerulean”, even though they pretty much mean the same thing.

On the other hand, the White Tiger is a god of war and righteousness, raining judgment down on evil. That sounds a lot like a certain someone… 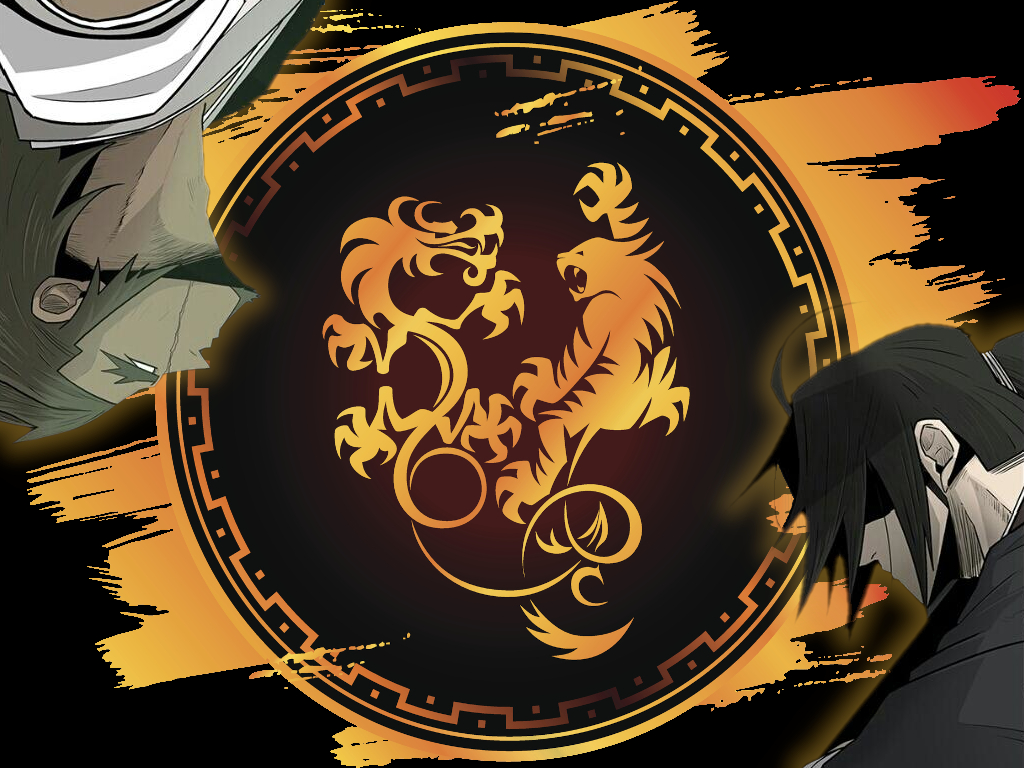