Fate is a cruel mistress. Sometimes, the thing you dread the most appears at the worst time, in the worst possible fashion. Just like a bad dream…

Eun Han-Seol’s body was wrapped in a silvery-white mist of chi. The mist was an indication that she was recovering well after expelling the poison from her body.

Every time she breathed in and out, the mist would circle around her like a living thing.

The mist brushed past the furniture in the room as it revolved around her, turning them to dust. However, Eun Han-Seol was unaware of this fact as she was too focused on her meditation.

Suddenly, beads of sweat appeared on her face, marring her flawless, gallant beauty. The sweat dripped down her neck to her chest, but still, her concentration remained unaffected.

As her chi circulation reached its peak, the silvery-white mist thickened and began to spin faster and faster, becoming like a barrier that protected her from outside interference.

Eun Han-Seol had started training in the evening, but by the time she finally completed her meditation, it was already the crack of dawn. She gathered the mist in the room near her head, then took a deep breath, absorbing it back into her body.

“Haa…” she exhaled, opening her eyes. A clear light like the sparkle of a crystal flickered in her eyes for a brief moment.

She checked the condition of her body.

Every muscle of hers felt like a coiled spring, packed with strength that would gush forth at her will. Her chi flowed through her blood vessels like a raging river. The life force that she exuded was tremendous. It was clear that her body had been restored to tip-top condition.

However, she felt that this wasn’t something to be happy about at all. Now that her strength had fully recovered, it was about time she left this place. Just like the smashed-up furniture in this room, she did not belong here.

Sa-Ryung had gone out to investigate the movements of their enemies. The instant they returned to the Northern Army Fortress, was the instant she had to leave this place.

Soon, the time will come when we have to say goodbye.

Eun Han-Seol took a quick bath, then headed to the Tower of Shadows where Jin Mu-Won lived.

Before coming here, Eun Han-Seol had thought that there was no longer anything left of the Northern Army. ‘The giant that was Northern Army has breathed its last and ceased to exist,’ she was told. She had been convinced that this was true…until she met Jin Mu-Won.

He is not the kind of man who would take this lying down.

*The Jin Mu-Won I know is a man who is constantly planning for the future. He might have nothing now, but he is always doing his best to survive each and every day, all the while waiting patiently for an opportunity. *

I don’t know what he’s planning, but I have a feeling that the moment he steps out into the world, something big is going to happen.

“Now that I think about it, I’ve really gotten used to my current lifestyle, huh.”

Every day, after finishing her meditation, she would head over to the Tower of Shadows for a meal.

She would eat the food he cooked and drink the tea he brewed. Whenever they spent time together, all her worldly worries would be cast aside and forgotten. It was a refreshing and comforting feeling.

At first, she had felt awkward about accepting his hospitality and sincerity. She was a trained human weapon, and weapons did not need to have emotions or form relationships with people. At least, that was what she had been taught. However, Jin Mu-Won had changed her. She often found herself relaxed and unguarded when she was together with him.

She knew that she had fallen into a trap of her own making. Even so, she couldn’t resist her desire for the warmth that Jin Mu-Won gave her.

Suddenly, Eun Han-Seol stopped in her tracks. A refined, elegant woman stood in her way.

In the light of the rising sun, Seo-Moon Hye-Ryung’s beauty was all the more dazzling. She was currently looking up at the Tower of Shadows, the sunlight casting a long, dark shadow behind her.

“Are you taking a walk?”

“I always eat together with him.”

For a moment, Seo-Moon Hye-Ryung appeared confused at Eun Han-Seol’s unexpected answer, but she quickly regained her initial composure.

Eun Han-Seol nodded like she had only stated the obvious.

Despite Shin Won-Ui ordering his servants to run a background check, we haven’t been able to dig up any information on this girl at all. We heard from Jin Mu-Won that her name is Eun Han-Seol and that she is a distant relative of his. However, that young man could be lying for all we know.

“How is Mister Jin’s condition? Is he feeling better now?”

“You already know the answer to that, don’t you? After all, the person who did that to him is your companion.”

In the face of Eun Han-Seol’s accusation, Seo-Moon Hye-Ryung made an apologetic expression.

“Once again, I apologize for what happened. I did not think that Mister Shim would be so extreme.”

Eun Han-Seol’s attitude was starting to irritate Seo-Moon Hye-Ryung, but she restrained herself from showing her annoyance on her face. She was a few years older than Eun Han-Seol and wanted to maintain the appearance of a mature woman in front of her.

Similarly, Eun Han-Seol did not like Seo-Moon Hye-Ryung in the least. The woman gave her a disgusting feeling, so much so that she couldn’t stand being in the same room as her. She puffed up her cheeks and glowered at the older woman. 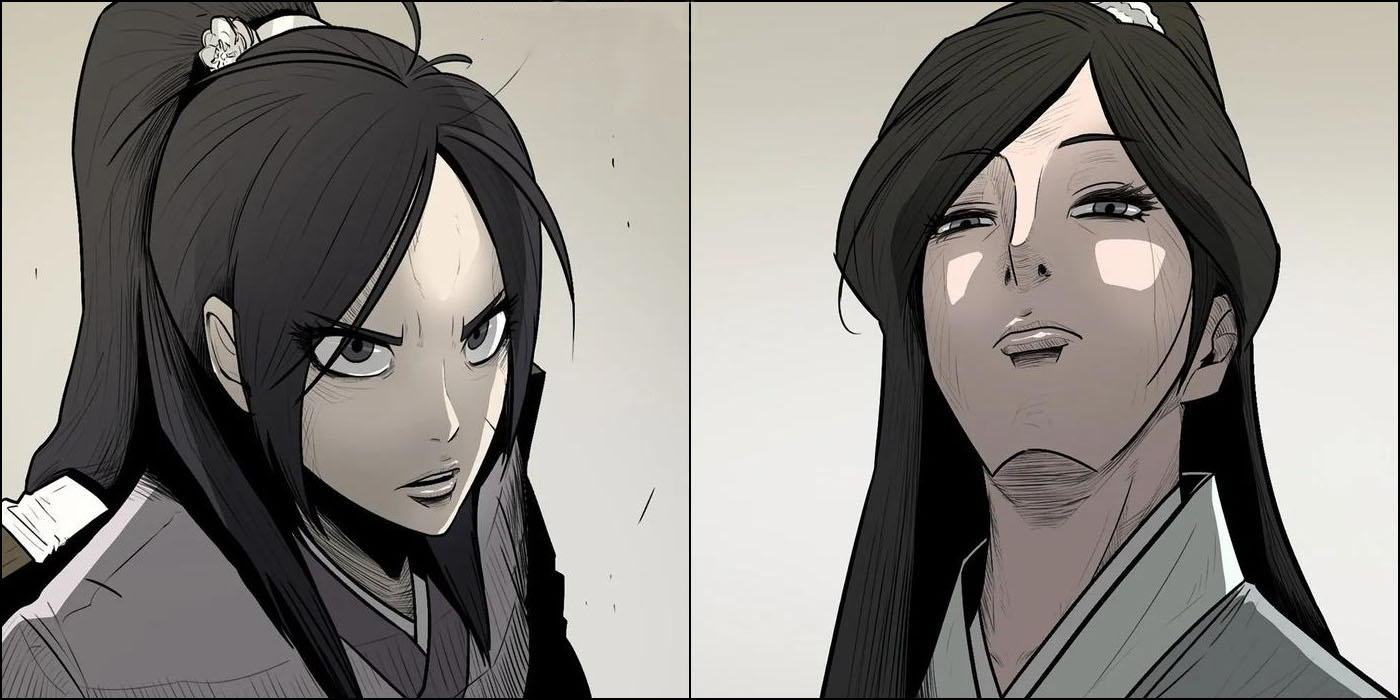 However, Seo-Moon Hye-Ryung only found her angry expression adorable.

“Miss Eun, do you have any siblings?”

“Why are you asking me this?”

“I was just a little curious, that’s all.”

Eun Han-Seol looked wary of her, but in Seo-Moon Hye-Ryung’s eyes, she was still really cute.

“What about your parents?”

Seo-Moon Hye-Ryung apologized, “I’m sorry. Let’s talk about something else, shall we?”

However, Eun Han-Seol acted as if her questions hadn’t bothered her at all. She went around her and started walking toward the Tower of Shadows, leaving Seo-Moon Hye-Ryung with no choice but to chase after her.

“Wait, do you want to have tea together sometime?”

Eun Han-Seol glared at Seo-Moon Hye-Ryung, her expression seeming to say, ‘Why the fuck are you asking me that?’

Seo-Moon Hye-Ryung giggled, “Is that a no?”

It seems that this woman’s going to keep annoying me until I accept.

“Is that a promise?”

“Come visit me when you have time, then. I’ll be waiting for you.”

Just then, the two arrived at the entrance of the Tower of Shadows. Eun Han-Seol turned toward Seo-Moon Hye-Ryung and asked, “Are you going to follow me inside?”