If Dam Soo-Cheon was fire, then Jin Mu-Won was water. The former asserted himself through his fiery disposition, while the latter adapted to everything in his stride like formless water.

Just as Dam Soo-Cheon was about to call out to Jin Mu-Won, a violent torrent of energy tore through the air, zooming straight at Dam Soo-Cheon like a bolt of lightning.

The attack slammed into Dam Soo-Cheon, stirring up a whirlwind of dust. Jin Mu-Won shielded his eyes from the devastating windstorm and backed away.

“Damned brat! You sure ran away quickly, but we still caught up to you!”

When the dust cloud settled, three men wearing red robes and matching red bamboo hats1 appeared. Oddly, they had identical auras like triplets born on the same day at the same time.

They each wielded a crimson longsword with the edges sharpened so finely that Jin Mu-Won could sense the keenness of the blades despite having retreated out of the battlefield.

Jin Mu-Won frowned. These three martial artists had pretty distinct characteristics, but for some reason, he hadn’t heard of them before. Although he lived in the isolated North, he always made Uncle Hwang tell him about the famous martial artists of the Central Plains, so he expected to be able to recognize most of them, if not all.

Dam Soo-Cheon stood in the middle of the battlefield. Despite enduring a direct hit from the assassins, he was totally unscathed.

I wondered who they were, but it seems like these people are related to the ones I fought previously.

Dam Soo-Cheon’s eyes flashed with excitement. He bellowed, “Who goes there? I can’t believe you guys attacked me without warning!”

Dam Soo-Cheon’s roar was intimidating, but it wasn’t enough to make the red-robed men flinch. Rather, all he did was make them openly hostile toward him.

“Did you think that you would be able to get away scot-free after annihilating the Shrouded Ghost Squad?”

Dam Soo-Cheon’s eyes glinted as he recalled the warriors who had assaulted him on his way to the Northern Army Fortress.

“Shrouded Ghost Squad, Shrouded Ghost Squad… Ah! I think I remember now. I guess it’s just as well that you guys are here to take revenge for them because I have a lot of questions for you. For example, who exactly are those guys? Also, why did they try to get in my way?”

The Shrouded Ghost Squad and their leader, the Shrouded Fire Demon. None of them were ordinary opponents. Most importantly, I’ve never heard of warriors like them in the Central Plains before.

Maybe others couldn’t be sure of this, but not me. After all, I’ve made absolutely sure to pay attention to every small detail of everything happening in the gangho.

In addition, the martial arts used by the Shrouded Ghost Squad are very different from the rest of the gangho. So different, in fact, that they could be said to be operating on opposing principles. How interesting is that?!

Dam Soo-Cheon looked at the red-robed men. He couldn’t see their faces clearly because of their bamboo hats, but his instincts told him that they weren’t ordinary martial artists.

“You guys came after me without even knowing who I am?”

Dam Soo-Cheon narrowed his eyes. He did not know which faction the Shrouded Ghost Squad and the Shrouded Fire Demon belonged to. Likewise, these people affiliated with them had no idea who he was. They only sought him out because he had obliterated the entire squad.

They are probably pursuing me for no other reason than to eliminate a potential obstacle to their plans.

The red-robed man continued asking, “How are you related to the Northern Army?”

“The Northern Army? I hold them in high esteem, and have wished to visit their headquarters for the longest time.”

“So you’re saying, you have no ties to them at all?”

“Before today, that would have been the truth. By the way, just who are you people?”

“This isn’t fair, you know. I’ve answered all of your questions, so it’s only natural that you answer mine, right?”

Suddenly, the red-robed men’s killing aura intensified and their chi began to stir.

“This is an interrogation. You have no right to ask questions.”

These people aren’t normal. I had a feeling that there was something off about the Shrouded Ghost Squad back when I fought them, but I couldn’t get any answers out of them because of their mental resilience.

*They possess a ridiculous killing intent and display incredible courage in the face of fear. Those aren’t things that can be learned in just a day or two. They would have had to overcome countless hardships and go through rigorous training to become like that. *

There aren’t many organizations in the Central Plains that can accomplish this. Even if they could, that doesn’t mean that they have done so. At least, not to my knowledge.

In conclusion, these people most likely belong to a faction that I am unfamiliar with. Not that that’s a bad thing!

The red-robed men charged at Dam Soo-Cheon, their blades slicing through the air.

A black wind surrounded Dam Soo-Cheon, obscuring his vision from the razor-sharp crimson swords concealed within. In Jin Mu-Won’s eyes, it was as if Dam Soo-Cheon had been swallowed by a tsunami of red and black.

Dam Soo-Cheon appeared to be in grave danger. Any moment now, he could be ripped to shreds. Even so, he remained motionless.

Are you just going to give up and do nothing?

I highly doubt that!

Jin Mu-Won could sense a tremendous chi radiating out from inside the battlefield, and at the very center of this chi storm, stood Dam Soo-Cheon.

Suddenly, the rays of a blindingly bright, white light pierced through the sea of red and black. The light was so glaring that not only Jin Mu-Won, but even the three assassins were forced to squeeze their eyes shut in pain.

A deafening clap of thunder resounded throughout the battlefield, followed almost immediately by the sound of someone throwing up blood.

Jin Mu-Won opened his eyes, only to see a red-robed assassin soaring in midair, his chest sunken inwards unnaturally.

“Lil’ bro!” The eyes of the two assassins still alive became dyed red with hatred and grief for their dead brother.

However, Dam Soo-Cheon wasn’t about to let go of this opportunity. He charged towards the remaining assassins like a raging tempest.

The wind from Dam Soo-Cheon’s attack slammed into his opponents, engulfing them in a devastating whirlwind of light.

In response, the assassins spat out wave after wave of crimson sword chi infused with blood, shouting in unison, “BREAK THROUGH! CASCADING RAIN OF BLOOD (血流萬適破)!” 2

A sea of crimson blades plunged downward like a waterfall, raining directly upon Dam Soo-Cheon.

Although this move was a double-edged sword, the assassins knew that Dam Soo-Cheon would not be able to continue attacking them while dodging their bombardment. If he was a normal person, he would definitely retreat at this point and wait for his next opportunity.

Unfortunately for them, Dam Soo-Cheon was not normal. He was a man who seized every opening without fail.

Dam Soo-Cheon let out a ear-splitting roar as he rammed right into the assassins.

When the assassins’ bodies finally plummeted back to the ground, they split into a dozen misshapen pieces on impact. There was no sign of life left on their faces. They had died the instant Dam Soo-Cheon’s attack had hit them.

Jin Mu-Won looked at Dam Soo-Cheon. The man hadn’t gotten away unscathed from his reckless charge. His face was pale, and he seemed unsteady on his feet. In addition, there was a crimson sword sticking out of his back. 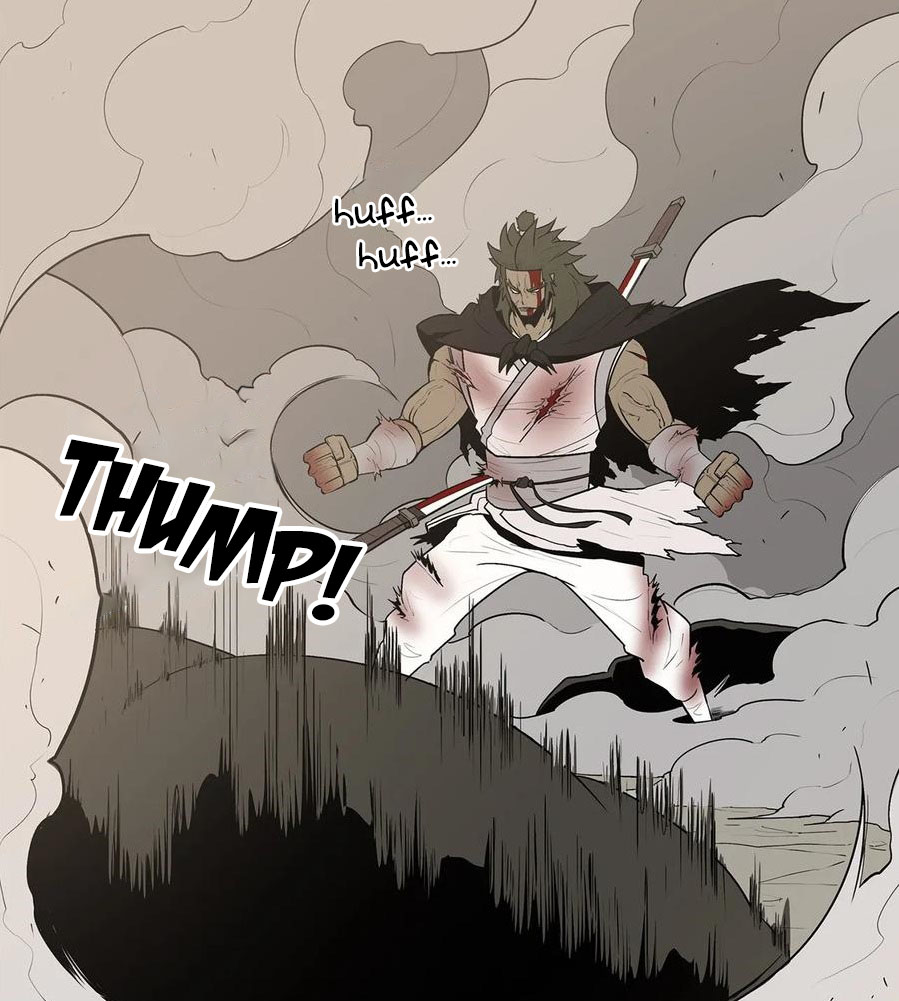 That’s not something that just anyone can do. How many people would willingly choose to put their own life at risk for the sake of killing their opponent?

“Huff…huff…” panted Dam Soo-Cheon, raising his head to face Jin Mu-Won. He was drenched in blood, but his eyes were sparkling.

“Sorry for the late introduction. My name is Dam Soo-Cheon.”

The first meeting between the two men who would one day be called the “Martial Emperor of the Azure Sky” and the “Northern Blade”, occurred while standing atop a pile of corpses.

As Dam Soo-Cheon entered the Northern Army Fortress, Shim Won-Ui and Seo-Moon Hye-Ryung’s jaws dropped in shock. However, he ignored them and turned to Jin Mu-Won instead, saying, “Thank you for allowing me to stay here without prior notice.”

“Don’t worry, the doors of the Northern Army Fortress are open to all. Rest well, and I hope you feel better soon.”

“Wah, it’s Dam-orabeoni! It sure took you long enough to get here!” exclaimed Shim Soo-Ah, who had come running as soon as she heard of Dam Soo-Cheon’s arrival.

Jin Mu-Won made his way to a secluded corner of the fortress, then quickly released the fists he had been clenching tightly all this time. His palms were covered in cold sweat, and his fingernails had left imprints on his skin.

I never imagined that a guy like that could exist.

Not only does he have the explosive power of a volcano, he also doesn’t hesitate to place himself in danger in order to get what he wants.

He makes good decisions quickly and rationally. To call him a genius would be a grave understatement.

Jin Mu-Won suddenly felt a pang in his heart. He turned to look at the Lofty Sky Manor, where Dam Soo-Cheon was staying. For a moment, it was as if he could see an illusion of a slumbering dragon coiled around the building.

At the thought of this young warrior of the same generation, his heart tingled with both excitement and trepidation.