Jin Mu-Won and Kwak Moon-Jung sat in an empty lot near the harbor, enjoying the cool night river breeze. Both the escorts from the White Dragon Merchant Association and the Iron Brigade mercenaries kept their distance, as if they wanted nothing more to do with them. Ham Ji-Pyung and his daughter were the only ones who dared approach them, even going so far as to deliver meals to their benefactors.

Jin Mu-Won frowned. During one of his exchanges with Ham Ji-Pyung, he learned about the events of fifteen years ago that had ultimately led to Ham Ji-Pyung’s excommunication from the Kongtong Sect. Although he had mentally prepared himself to deal with the Taoists, it turned out that he had also unintentionally gotten involved in something much bigger than he expected.

I have to be careful about how I go about solving this problem, or it might leave unexpected repercussions.

He glanced at Kwak Moon-Jung next to him.

He’s still sulking. The alienation and aversion from the other escorts is affecting him horribly. To be betrayed by the very people he’d thought of as family…he must be extremely shocked and depressed.

Kwak Moon-Jung curled up into a ball and mumbled softly, “The gangho is such a heartless place.”

Jin Mu-Won nodded in agreement and silently watched over Kwak Moon-Jung. Ten years ago, when he was only thirteen, the true meaning of the phrase “survival of the fittest” had been brutally hammered into him. No one understood how the boy currently felt more than he. After all, what the Four Pillars had done to his father and the Northern Army was much, much worse.

He’d once considered the Four Pillars of the Northern Army as his beloved family members. His father was often busy, so the four of them had basically taken on the role of godfathers while Jin Kwan-Ho wasn’t around. Back then, he’d thought that things would remain that way forever.

However, these four people that he’d trusted the most ended up betraying the Northern Army and forcing his father into committing suicide.

In this cruel world where even blood relatives could betray their own families, he was a fool for blindly believing in people who were completely unrelated to him.

Now, Kwak Moon-Jung had also awoken to the reality of this merciless gangho.

He’s probably going to be depressed for a while, but if he can get over this, it will become a valuable experience that will make him stronger.

“Shh!” Jin Mu-Won placed a finger on his lips.

Kwak Moon-Jung immediately clamped his mouth shut. A short distance away from them, there was a disturbance in the White Dragon Merchant Association’s camp. The two men waited for a while, until a group of seven martial artists walked out of the camp and approached them.

On their sleeves, there was a green bamboo embroidery; At their waists, they each carried a Bamboo Blade. It was clear that they were all first-class disciples of the Kongtong Sect. Jin Mu-Won noticed that Mu-Hae and Mu-Wol were both among the seven.

A man who looked to be the leader of the seven exchanged gazes with Jin Mu-Won and Kwak Moon-Jung.

He’s a skilled swordsman, thought Jin Mu-Won. Although the leader was barely over five feet tall, his sharp eyes and the blade-like atmosphere emanating from him immediately gave Jin Mu-Won that kind of impression. Moreover, he noticed that even the prideful Mu-Hae and Mu-Wol were obediently walking behind the leader. From that, it wasn’t hard to deduce that the leader’s status was far higher than theirs.

Even in the dark, the Taoist leader’s eyes shone like a lamp, causing a creeped out Kwak Moon-Jung to gulp in fright.

In a sharp voice like a cold, bared blade, the leader asked, “Are you Jin Mu-Won?”

Jin Mu-Won stood up and replied, “Yes. Who are you?”

“My name is Mu-Jin,” the leader announced his Taoist name with pride. He belonged to the same generation as Mu-Hae, but their martial arts skills were in no way on the same level. Mu-Jin was the man who stood at the top of Kongtong Sect’s disciples, and every other first-class disciple had to respectfully refer to him as First Senior Brother.

In other words, it was generally accepted that he would be the next Sect Leader of the Kongtong Sect.

Unlike the other disciples, Mu-Jin had never participated in any of Kongtong’s internal tournaments. That was because his skills had already been acknowledged by the other members of the sect, and he had no need to prove himself.

Not only was he talented, he was also hardworking. While the other disciples were preoccupied with competing with each other for the tournament, he had trained in seclusion and learned one of the strongest sword techniques of the Kongtong Sect, the Five Yin Divine Blade (五陰神劍).

The Five Yin Divine Blade was a sword technique created by the Sage of Clouded Sky, a legendary swordsman of the Kongtong Sect from three hundred years ago, by combining every other sword technique in the sect. Ever since then, this powerful technique was only taught to successive generations of sect leaders.

From then till now, fifteen years had passed since Mu-Jin first learned the Five Yin Divine Blade. For all that time, he had never displayed his true abilities, inside or outside the sect. Even so, none of the other first-class disciples doubted his mastery of the sword technique.

That was because Mu-Jin was a martial arts maniac who did nothing but train all day long, without any regard for the day-to-day affairs of the Kongtong Sect. In fact, he was so obsessed with training that he had even tried to step down from the position of successor using “it will only reduce my training time” as an excuse.

“I heard that you unfairly assaulted three disciples of the Kongtong Sect. Is that true?”

“If you call that an unfair assault, then I have nothing more to say to you.”

“Are you denying it, then? In that case, why did you break several disciples’ Bamboo Blades?”

Mu-Jin’s eyes flashed with killing intent. The Bamboo Blades were the symbols of a first-class disciple of the Kongtong Sect. To break their swords was to shatter their prides in themselves and their sect.

Originally, Mu-Hae had not wanted to tell Mu-Jin about his broken sword, as it made him feel extremely ashamed of himself. However, he still wanted to blow up the issue, so he colluded with a few other disciples and brought them with him when he complained to Mu-Jin. Unfortunately for him, though, Mu-Jin saw through his lies instantly.

“Although I don’t know why you attacked my junior brothers for no reason, I will at least promise you that as long as you surrender quietly, the Kongtong Sect will judge you fairly.”

“Judge me fairly? Is that even possible?”

“It’s your junior brothers whom I don’t trust.”

Mu-Jin’s eyebrows twitched. Just then, Mu-Hae, who was standing beside him, shouted, “Don’t listen to that devious guy, Senior Brother! He’s trying to trick you! You should just judge him right here, right now!

“That’s right, Senior Brother! His martial arts are weird, and he’s as sly as a fox. We should subdue him immediately!” added Mu-Wol.

As expected! When Ham Ji-Pyung told me of everything that had happened fifteen years ago, I simply couldn’t bring myself to trust his one-sided perspective. However, Mu-Hae and Mu-Wol’s current behavior has now dispelled all my suspicions.

In that case…what should I do?

Jin Mu-Won sent a telepathic message to Kwak Moon-Jung, saying, [Just to be safe, please run over to the South Sea Inn and check on the two people there.]

At the same time, Mu-Jin moved closer to Jin Mu-Won and threatened him, saying “Are you going to fight back, or will you surrender quietly? Choose.”

Jin Mu-Won shook his head. He was the last Lord of the Northern Army. If this were personal, he wouldn’t mind enduring the humiliation and bowing down to another. However, Hwang Cheol and Kwak Moon-Jung were involved this time, so that was not an option.

“Sigh. Why are you choosing the stick instead of the carrot?” 1

“Before we fight, I’d like to ask you a question.”

“Did your junior brothers tell you why they came to this village?”

The blood drained from both Mu-Hae and Mu-Wol’s faces. Mu-Hae immediately sent a punch flying Jin Mu-Won’s way, yelling, “Senior Brother! Do not listen to this bastard’s sophistry! He’s a devil!”

Mu-Wol and four other Taoists quickly followed suit and charged toward Jin Mu-Won.

Afterimages of fists and swords filled Jin Mu-Won’s vision, making him furrow his brows slightly. He was extremely upset about Mu-Hae’s sudden interruption, but it was already too late to stop him. 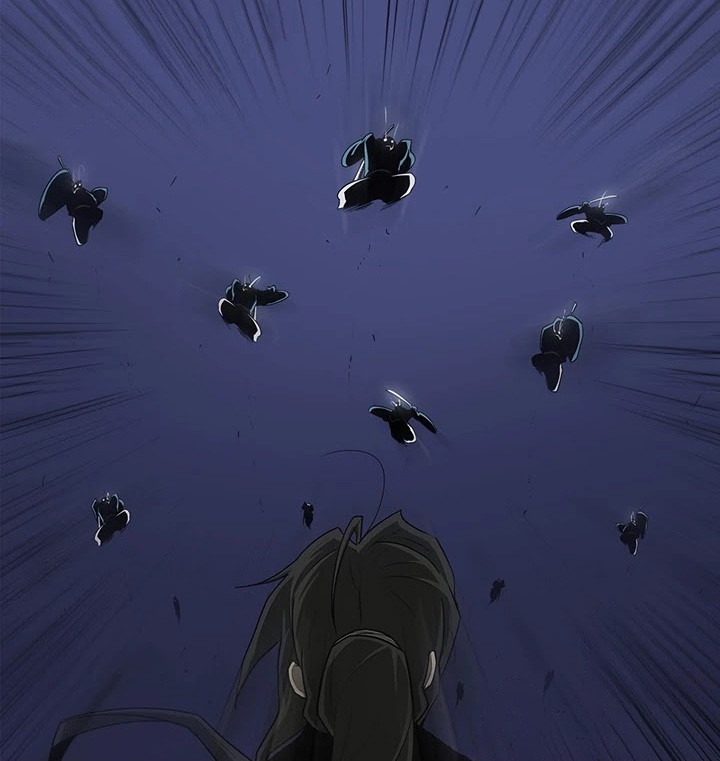 Well, no matter. I’ll just start by finishing off these six.

Although Mu-Hae and Mu-Wol still hadn’t recovered from their dislocated shoulders, their fist techniques were polished. The other four Taoists were no slouches either, and the aura surrounding them was impressive.

Four Bamboo Blades sliced through the air, while Mu-Hae and Mu-Wol made up for the gaps in between the slashes with punches. It was a combination attack with no weaknesses.

Seeing his fellow disciples’ outstanding teamwork, Mu-Jin couldn’t help but nod in approval. Individually, their martial arts may be lacking, but they are making up for each other’s weaknesses wonderfully.

However, to Mu-Jin’s astonishment and admiration, Jin Mu-Won moved through the storm of attacks freely. With his casual reddish-brown clothing and light footsteps, he looked like a man taking a leisurely walk in the park.

Mu-Jin could tell that Jin Mu-Won was not using any kind of movement technique, but even so, his steps were confident, and none of the six Taoists could lay a finger on him.

For the first time in Mu-Jin’s life, he couldn’t help but praise his opponent.