“What kind of a person is Master Jin?”

“Which sect is he from?”

In the face of Im Jin-Yeop and Dam Jin-Hong’s relentless interrogation, Kwak Moon-Jung looked as if he was about to cry. They thought that the boy was hiding the truth on purpose, but he really didn’t know anything about the man named Jin Mu-Won.

All Kwak Moon-Jung knew was that Jin Mu-Won was Hwang Cheol’s nephew, and that Hwang Cheol doted on him. He had no idea where he was from and what martial arts he used.

Right now, tensions in the White Dragon caravan were unusually high. On one hand, Gong Jin-Sung wanted to continue on with their journey as soon as possible, while on the other hand, Yoon Seo-In insisted that they had to remain in place until the issue with the Kongtong Sect was resolved. As a result, they ended up in a stalemate and couldn’t move on until they received an update about the Kongtong Sect’s next move.

When Jin Mu-Won stepped out of the South Sea Inn, all of the mercenaries and escorts turned to look at him. However, none of them approached him. They hesitated to do anything that would incur Yoon Seo-In’s rage, and associating with Jin Mu-Won was a very good way to irritate her.

Kwak Moon-Jung was the only person who ran toward Jin Mu-Won. Jin Mu-Won rubbed the boy’s head and looked around. He could feel the cold stares all around him.

After his conversation with Ham Ji-Pyung, the atmosphere around him had suddenly changed. Gone were the friendly greetings, replaced by hostile glares.

Jin Mu-Won smiled bitterly and walked away with Kwak Moon-Jung.

Tears dripped down Kwak Moon-Jung’s face as he sobbed, “I’m so sorry, Hyung. Because of me…”

“But this would never have happened if I hadn’t stuck my nose where it didn’t belong.”

“You did the right thing. It’s not easy to summon one’s courage in that kind of situation. However, you made one grave mistake.”

Jin Mu-Won looked straight into Kwak Moon-Jung’s eyes and scolded, “You did not take your own capabilities into account. Anyone can do what you did back there. Your mistake was not thinking before you acted. You caused a problem that you couldn’t resolve on your own, without being prepared to take responsibility and face the consequences of your actions.”

Jin Mu-Won continued, “Always think thrice before you act. Your decision could place everyone around you in danger, and who knows how far your enemies can reach? What lowly means they would stoop to?”

“I will engrave that in my mind.”

“Still, thanks to you, two people were saved. You can rest assured that you did the right thing.”

As his worries were assuaged, tears flowed down Kwak Moon-Jung’s face like a waterfall.

Jin Mu-Won smiled. Kwak Moon-Jung was still a child, after all. He was neither good at martial arts nor well-educated, but he had a strong spirit that very few possessed. This spirit had allowed him to stand up and take action when even the Iron Brigade, a group of martial arts experts, could not. Most importantly, a strong spirit wasn’t something that could be bought with money or taught in school.

Although it could lead to painful consequences, having a strong spirit was a virtue, not a weakness. It meant that Kwak Moon-Jung was capable of empathizing with others’ pains and acting with integrity. Above all, it also meant that he was a person with conviction that was not driven by misguided greed, but a deep-seated belief that shone brighter than anyone else.

“From now on, you have to work hard on getting stronger, and learn how to clean up after yourself.”

Kwak Moon-Jung didn’t ask Jin Mu-Won how he could become strong. He didn’t know why, but he felt that as long as he stayed by Jin Mu-Won’s side, he’d definitely grow stronger, both in martial arts and as a person. Right now, he looked up to this older brother far more than anyone else.

Jin Mu-Won turned around only to find Yoon Seo-In staring at them with her hands on her hips. “What’s the matter?” he asked.

“Are you asking because you really don’t know? It’s your fault the White Dragon Merchant Association is clashing with the Kongtong Sect!”

As Yoon Seo-In’s voice echoed across the harbor, one by one the escorts looked away and pretended that they hadn’t seen or heard anything.

“Young Mistress, this is not the time to raise your voice.”

Gong Jin-Sung tried to calm Yoon Seo-In down, but his efforts were futile. Yoon Seo-In strode toward Jin Mu-Won, who simply stared back at her blankly. However, his composure only fueled Yoon Seo-In’s anger.

Yoon Seo-In launched into a furious tirade, but Jin Mu-Won remained silent and did not argue with her.

“At this rate, there’s no way we can continue letting you join us on our journey to Yunnan! I don’t want to spend every waking moment worrying about the people chasing us! Well? Tell me! What are you going to do about this whole mess!?” Yoon So-In panted, out of breath.

Jin Mu-Won patiently waited for Yoon Seo-In to finish ranting, before finally saying, “Aren’t you going to ask me about the reason why things ended up this way to begin with?”

“This child almost had his arm cut off. He may be young, but he is still an escort working for the White Dragon Merchant Association, for you! Shouldn’t his safety be your first concern? Furthermore, the innkeeper and his daughter nearly lost their lives. Aren’t you a martial artist of the gangho? What happened to keeping your priorities straight?”

“Miss Yoon, I am indeed aware of your relationship with the Kongtong Sect. However, you are first and foremost a leader of the White Dragon Merchant Association and the person in charge of this search-and-rescue mission. In my humble opinion, it would be wise to hear what everyone has to say before you make any premature judgments.” 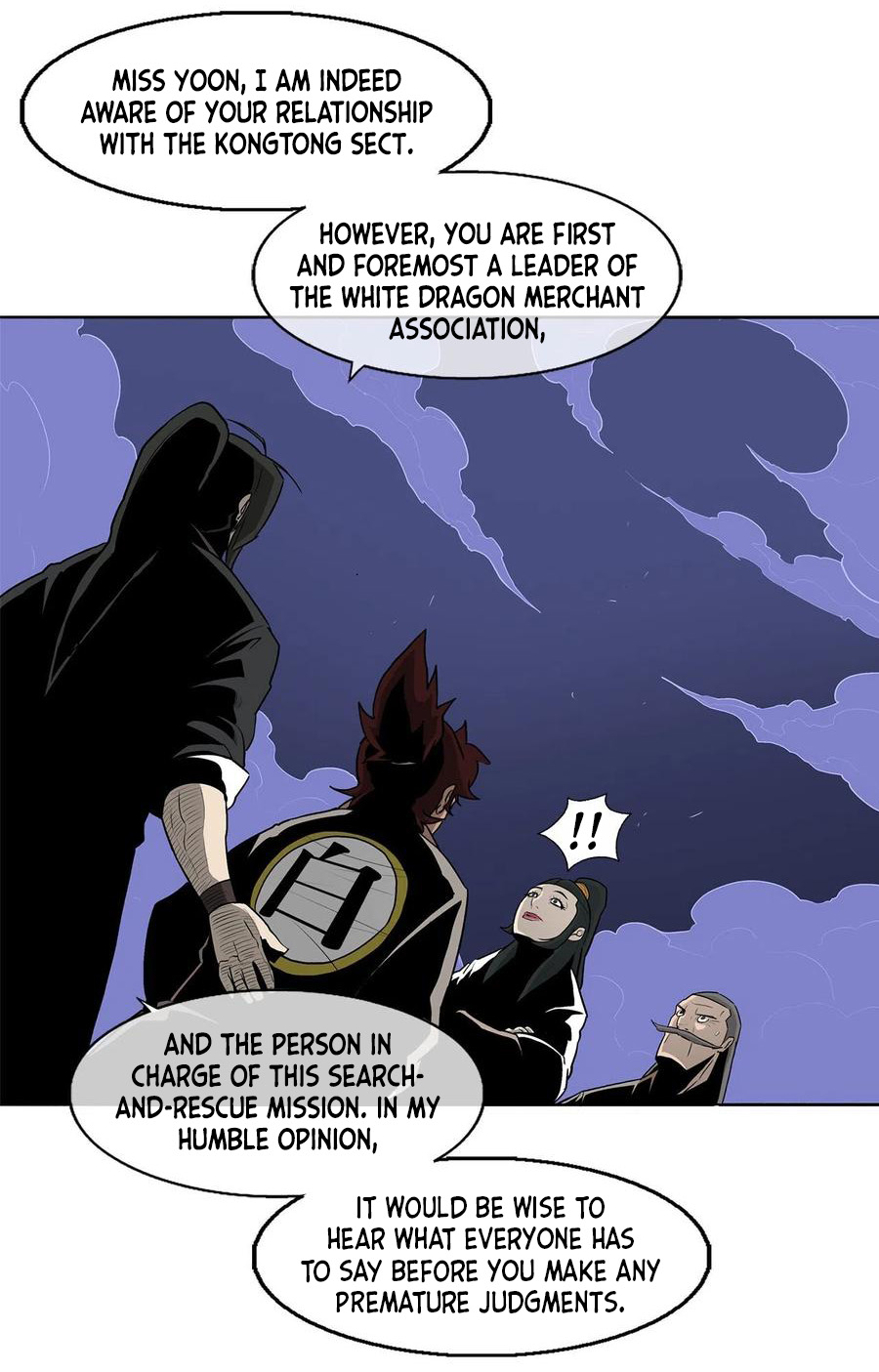 Yoon Seo-In’s face turned red with shame and embarrassment. She had been blinded by her rage. Deep down, she knew that Jin Mu-Won was right, but even then, she did not want to admit it. Instead, she screamed, “So are you saying that it’s actually my fault? And that you didn’t do anything wrong? Hmph! You don’t even care what happens to the White Dragon Merchant Association, do you?”

She hasn’t been listening to a single thing I said. There’s no logic or reason in her words, only incoherent fury. Jin Mu-Won calmly said, “I’ll take responsibility for everything that has happened. I wouldn’t have stepped up in the first place if I wasn’t prepared to do so.”

Jin Mu-Won could hear the sheer pride Yoon Seo-In held for the Kongtong Sect, which she was a part of, in her voice. That pride wouldn’t allow her to accept whatever he said, but nevertheless, he had to say it.

“Nothing in this world lasts forever.”

“Huh? What are you saying all of a sudden?”

“The Kongtong Sect may be powerful, but it won’t exist forever.”

Even the Northern Army, which had been much stronger than the Kongtong Sect, had collapsed in an instant. And that was only one example in the long history of the murim, where such events happened frequently. Any faction that fell out of favor would be swallowed up by the cruel reality of the gangho.

The Kongtong Sect was no exception. However, the enraged Yoon Seo-In once again misunderstood the meaning behind Jin Mu-Won’s words.

“Are you insulting the Kongtong Sect? Trash like you…”

Jin Mu-Won’s voice was soft, and he hadn’t used his chi. Even so, his voice contained a power beyond Yoon Seo-In’s comprehension.

Yoon Seo-In unconsciously took a step back. Then, realizing what she had just done, she bit her lip and attempted to continue shouting at Jin Mu-Won. However, the moment she locked gazes with him, she shuddered. She opened her mouth, but no words came out.

Although she was furious and irrational, she wasn’t an idiot. Jin Mu-Won wasn’t an employee of the White Dragon Merchant Association that she could order around as she liked. He was a martial arts expert who had taken down Mu-Hae, Mu-Wol, and Seol-Goong despite the fact that they had ganged up on him. He wasn’t an opponent she had any hope of defeating.

She suddenly felt as if her entire body had been doused with cold water.

“Like I said, I will take responsibility for everything that happened today. If it pleases you, Moon-Jung and I will leave the caravan and travel on our own.”

Well, since the very beginning, I’d already planned on traveling alone. I’m also not interested in causing trouble for these people who have helped me.

Yoon Seo-In was at a loss. No one had ever chided her like that before.

Gong Jin-Sung, who couldn’t bear to watch this scene anymore, stepped forward and said, “Wait. We’re not in so much of a hurry that we need to make a decision right now. Why don’t you spend the night with us, and we can discuss what to do together? How about it, Young Mistress?”

“Huh? Okay…” Yoon Seo-In shot Jin Mu-Won an awkward glance, then walked toward the place where the escorts were gathered.

Gong Jin-Sung asked, “So…what are your plans? Like the Young Mistress said, the Kongtong Sect will not stay still.”

“I’m waiting for them to come to me.”

I let Mu-Hae escape alive for a reason, you know?

Translator’s Notes: First LNB chapter of 2022! Maybe I’ll catch up with the manhwa this year? (and pigs will fly)