Impersonation of a member of a prestigious family.

Actually, that kind of crime is pretty common.

Due to the large size of the Five Great Clans, which included the Nam-Goong Clan, it was difficult for even the clans themselves to keep track of all of their branch family members. Thus, scammers would often take advantage of this fact.

These scammers included even the random drug dealers on the street, who would often claim that their drugs were synthesized by either the Nine Sects or the Five Great Clans.

The Murim Alliance has better things to do than catch small-time criminals.

Petty swindlers simply weren’t worth the Murim Alliance’s precious time and attention. However, it was a different situation if someone was teaching demonic arts using the name of the Nam-Goong Clan.

“Hm…Master Nam-Goong Wook? Why do you look so constipated? Do you need to take a shit?”

“You bastard…” Nam-Goong Wook ground his teeth in frustration, but unfortunately for him, that action only ended up revealing the fear and embarrassment he was trying to hide.

“Y-You said that you were going to recommend us to the Murim Alliance? What would be the point of doing that…?”

“I think you might have misunderstood me, but I just want to brag about the fact that there is a master warrior of the Nam-Goong Clan teaching martial arts in this village. Moreover, the martial arts you teach are so powerful that a person nearly got killed. I was joking when I said that your martial arts resembled the demonic arts… I mean, can’t you take a joke?”

Although I said that, I knew that I hadn’t been joking at all. Most importantly, Nam-Goong Wook, Goatee 1, and even my father Baek Mu-Heun knew that I had been completely serious when I accused them of teaching demonic arts.

The more prestigious a clan is, the more they hate being associated with demonic arts.

Honor and prestige—these were the two things any warrior of the Orthodox Sect would risk their lives for. Of course, they also love doing all sorts of horrible things behind their enemies’ backs, but on the surface, they liked to maintain a righteous image, as dictated by the Way of the Hero. That’s why they could never tolerate anything that would damage their reputation.

“You were going way too far with that joke!”

“Sigh… I doubt the Murim Alliance would kill you guys over a joke, though?”

I cheekily raised a hand and pretended to slit my neck, but that simple movement was enough to make Nam-Goong Wook’s face turn pale. Contrary to his bandit-like appearance, this dude was unexpectedly naïve.

[Hey, what are you thinking?]

Suddenly, I heard a telepathic message from Dad. I rolled my eyes and looked to the side, but he only frowned.

[Are you absolutely certain that they are teaching demonic arts?]

I hadn’t reached the level where I could send telepathic messages yet, so I could only nod my head slightly in response.

I’m not sure if Dad got my message, but what I meant to say with my body language was, ‘You should move to the side and remain on standby. I’ll take care of this myself.’

I waited for a while, and Dad said nothing more, so I shall assume that he understood me correctly.

I turned to face the spectators and said, “At least, all of you should understand that I was just kidding, right? Seeing as the Nam-Goong Clan is a part of the Murim Alliance, they’ll probably contact the Nam-Goong Clan once I send them my recommendation. I’m certain the Nam-Goong Clan will be delighted to hear that the Amazing Master Nam-Goong Wook has opened a martial arts academy in our village, and will send us a heap of congratulatory flowers. In addition, it would be great if they sent someone to verify Yang Sam’s incredible martial arts talent…”

It seemed that even the dense Nam-Goong Wook could hear the bleeding sarcasm in my voice. The way he was glaring at me right now, if eyes could kill, he’d probably have murdered me ten times over.

I grinned and taunted, “Why should I? Did I say anything wrong?”

“ARGHHH, I’ll kill you…!” Nam-Goong Wook twitched as if he wanted to attack me, but in the end, he decided against it. There were too many people looking at us right now, and if he attacked us first, it would be equivalent to admitting his guilt.

“Hey, what was the meaning of all that?”

“It seems that Master Nam-Goong is actually a swindler.”

“Sigh, aren’t these guys all martial artists? They should just settle things by fighting, and if they’re not going to fight, then they shouldn’t argue.”

“I only came here to watch a fight.”

“Let’s wait a little longer. It looks like we’ll get to watch the show we wanted soon…”

Anyone with eyes could tell that the situation here was getting tenser by the minute.

When Nam-Goong Wook heard what the spectators were whispering to each other, his expression turned sour. He shot a glance at Goatee, only to find the other man frowning.

I knew it. Goatee’s the one in charge of thinking and planning.

Since the moment I saw him, I’d thought it was weird. The bandit-looking giant simply didn’t seem smart enough to have come up with such a complex scheme. Someone else had to be the mastermind.

I looked at Goatee calmly, and he smiled back at me. However, I could clearly feel the barely concealed killing intent behind that smile.

“Can you take responsibility for what you said?”

“You claimed that we were teaching demonic arts while impersonating members of the Nam-Goong Clan. Have you ever thought about what would happen to you if you were discovered falsely accusing innocent people without any evidence?”

On the other hand…

“Young warrior, do you truly understand the dangers of spreading fake news in the gangho? The Nam-Goong Clan will never forgive you for damaging their reputation.”

He was right. If I was wrong, then I’d be the one in deep shit for slandering the Nam-Goong Clan.

Goatee turned to face Dad and clasped his hands together in a fist salute2, saying, “Director Baek, it would seem that all of us have gotten a little too emotional today. Instead of continuing this pointless argument, why don’t we resolve this dispute another day?”

Oh? So that’s how Goatee wants to play it, huh?

He’s implying that we should shut up and go away since we don’t have any evidence of their wrongdoing. Otherwise, he’ll make sure that we go down together.

However, ‘almost impossible’ is not the same as ‘impossible’.

“Pfft! Did you honestly think a threat like that would be enough to scare me away?”

“Do you evil sect bastards know how to spout anything besides nonsense?”

…Technically, I’m also an ‘evil sect bastard’, but let’s ignore that for now.

Goatee narrowed his eyes, but now that we had reached this point, I had no intention of giving up. To me, the fact that the Jin Academy was teaching demonic arts to its students was as clear as day. As for the reason why I’m so confident in my judgment even though I haven’t seen the martial art with my own eyes?

I didn’t teach demonic arts for over a decade for nothing, you know.

Whenever Nam-Goong Wook and Goatee moved, their muscles would twitch in a certain way. Similarly, the nervous poses that the disciples behind them were making were extremely revealing. These little hints were more than enough for me to draw a solid conclusion.

“So, where are you guys really from? You started up a martial arts academy in a remote location and pretended to be instructors because you wanted to secretly expand your faction, am I right?”

This is one of the common methods that the unorthodox sects use to recruit disciples. I know it well because the Blood Demon Cult used to do it, too.

“Haa…” sighed Goatee, looking at me with an increasingly exasperated expression.

His laughter made my ears hurt and my skin tingle.

As he laughed, his aura and posture changed drastically.

His hunched back straightened, and muscles started bulging out from his thin body. In an instant, he had transformed from a skinny scholar into a muscular giant.

Huh. So that’s why his posture seemed so unnatural. He was using a body-morphing martial art.

The now powerfully-built Goatee stared down at me like he was about to swallow me alive. His physical appearance was completely different from before, except for that very characteristic goatee of his.

Based on the strength of his aura, he’s a first-class warrior, though he would be one of the weaker ones in that class.

In rural areas such as this village, first-class warriors were rarer than wild ginseng.

As if he couldn’t be bothered hiding his identity any longer, Goatee directed a wave of killing intent at me.

“I thought that you were making a wild guess, but it seems that I was wrong about you. How did you know who we were?”

His eyes widened with fury as he growled, “Even now, you don’t appear to understand what kind of situation you’ve landed yourself in. Very well. I wonder how much longer you can keep grinning like that?”

He stomped his foot, leaving a huge footprint in the stone-paved training ground.

“Grargh! From now on, I will immediately kill anyone who moves!”

A powerful killing intent spread out over the entire training ground. The Jin Academy disciples behind Goatee sprinted forward and blocked off the academy gates, preventing anyone from escaping. Sensing that their lives were in danger, the spectators’ faces paled.

“We didn’t see anything!”

“I won’t say anything about what I saw today!”

Unable to resist the killing intent, the trembling spectators fell on their butts and desperately pleaded for their lives. Mr Jang, the cloth merchant, hugged his son tightly in terror.

Jang Yi squirmed in his father’s arms and shouted, “You evil bastards! Master Baek will definitely kill you all!”

Goatee glanced at the spectators for a moment, then turned back to face me. He grinned evilly and said, “Damned brat, know that everyone here will die because of you.”

Only dead men tell no tales. Since we revealed their true identities, the only way these guys could remain hidden was to eliminate all of the witnesses.

“Try your hardest to fight back, okay? I’ll show you what happens to a weakling when they overstep their boundaries!” laughed Goatee, striding toward me. 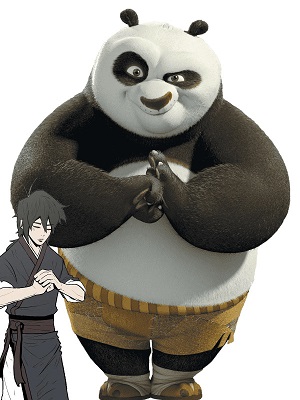