The warriors led by Yeop Pyung swiftly seized the Baek Family Manor from their enemies and uncovered a hidden underground pathway. As Yeop Pyung led the Blizzard Squad down the pathway, he commanded, “I’m sure their leaders are hiding here. Do not let a single rat escape.”

“Don’t worry, we’ve secured the perimeter of the manor. Nothing will get past us alive,” Yul Gyeong-Cheon replied.

“Good.” Yeop Pyung smiled in satisfaction. No one would be able to fault the Tyrant Fist Sect for what happened in Yuxi once they had identified their enemies and rescued the captured merchants. As a bonus, they would also be able to push the responsibility for all the civilian deaths onto these bastards.

Suddenly, one of the Blizzard Squad members held his torch out and said, “Commander, please take a look at this.”

The object that he lit up was an iron cage with several people curled up inside.

Yeop Pyung frowned. Yul Gyeong-Cheon observed the people for a while, then said, “I think they’re the captured merchants.”

“Yes, I recognize the guy furthest away from us.”

“I think they were driven insane just like the madmen we found on the streets.”

“I agree. Hm…” Yeop Pyung narrowed his eyes. Until now, the Tyrant Fist Sect still hadn’t found out the cause of the madness, and if all of the kidnapped merchants were like this, then they had a major problem on their hands.

“GUWOOOOOAH!” The insane merchants slammed themselves against the bars of the cage repeatedly. Thankfully, the cage was very sturdy and held firm despite the madmen’s enhanced strength.

“Anyway, we can think about how to solve this problem later. Our first priority is to capture the mastermind.”

As they walked, Yeop Pyung frequently glanced back at the cage with the crazed merchants. I’m not sure why, but I’ve got a bad feeling about them… In any case, I can take my time investigating what happened to them after we’re done here.

As Yeop Pyung and Yul Gyeong-Cheon moved toward the end of the corridor, they met with frequent enemy ambushes, but each time, they came out victorious. When finally they reached the end, they found their path blocked by a huge, seemingly impassable iron gate. However, Yul Gyeong-Cheon simply pulled out his sword and smashed the door to bits.

Behind the collapsed iron gate, there was an unbelievably spacious hall, and standing in the middle of the hall, stood Geum Dan-Yeop and his men.

Suddenly, the iron gate on the opposite side of the hall also fell apart, revealing the warriors of the Iron Spirit and Imperious Squads.

Although he had never met Geum Dan-Yeop before, his instincts told him that this was the mastermind behind the whole operation.

The Tyrant Fist Sect warriors surrounded Geum Dan-Yeop’s group, but instead of panicking, Geum Dan-Yeop only sneered, “I see you finally found your way here. I salute you for your hard work and enthusiasm.”

“Hmph! Did you think you would be safe after doing such a thing in the Tyrant Fist Sect’s territory?”

“Since when has Yunnan been the property of the Tyrant Fist Sect?”

“Since ten years ago, when we established ourselves here.”

“Oh, yeah. You got Yunnan in exchange for selling out the Northern Army, right?”

Yeop Pyung’s face soured. It was taboo to mention the fall of the Northern Army to any of the former Four Northern Pillars and their men. He yelled, “Shut the fuck up! Whatever your goal was, it’s all over for you now! Just surrender already!”

“That would be difficult. I spent a lot of time planning this, you know?”

“You’re not still dreaming of escaping, are you?”

“Huhuhu! Don’t worry, I had no intention of leaving here in the first place.” Geum Dan-Yeop grinned childishly.

Shivers ran down Yeop Pyung’s spine, but he suppressed them and threatened, “So you want to do this the hard way, huh?”

“I think you’re misunderstanding something here. You don’t have the strength or the right to demand anything of me.”

“What?” Yeop Pyung was furious.

However, Geum Dan-Yeop ignored him. When he had first come up with this plan, it had left him sleepless for several days on end. He didn’t want to lose his humanity, but he also didn’t think he had a choice in the matter. The only way to achieve his goal was to stray from the path of a human being and become a savage beast. That was the conclusion he had come to after churning it over in his mind several hundred times.

I am simply treating these devils the same way they treated my forefathers. Besides, this is the only method to awaken the Silent Night from its slumber. Geum Dan-Yeop bit his lip and asked, “Did you see the madmen in the cage?”

“Aren’t you curious? How did they go crazy? And where are the rest of the merchants and treasures?”

Yeop Pyung’s eyebrow twitched. Ever since he’d seen those madmen, he’d felt something nagging at him deep down. However, he couldn’t identify the cause of his anxiety.

Geum Dan-Yeop continued, “This is payback for what you did to us several decades ago.”

“What the fuck are you talking about?”

“Oh, you probably don’t know anything, do you? Well, I understand. You’re just your master’s pet dog, after all. I guess my only regret is that Jo Cheon-Woo isn’t here, though that was probably just wishful thinking on my part.” Geum Dan-Yeop raised his hand, and suddenly, an army of madmen rose from the darkness where they were hiding.

“GRRRRR!” The madmen growled, their red eyes glittering in the darkness. Their clothes were ragged, and they looked more like beasts than humans.

More madmen?! Yeop Pyung furrowed his brows, but before he could say anything, the madmen pounced on the Tyrant Fist Sect.

As the captain of the Blizzard Squad, Yul Gyeong-Cheon barked orders in his stead, yelling, “Kill them all!”

“B-But…” Several of the warriors hesitated. They knew that these madmen were the missing merchants they had been looking for all this time. Moreover, if the fact that the Tyrant Fist Sect had killed these merchants ever got out, they wouldn’t be able to avoid criticism.

As if that weren’t bad enough, the Ten Great Companies were likely to blame them for the deaths of their merchants, making the value of these merchants’ lives far above those of the ordinary Yuxi residents.

However, Yul Gyeong-Cheon insisted, “It doesn’t matter who they were, they’re our enemies now! Kill them all!”

As Yul Gyeong-Cheon commanded, the Tyrant Fist Sect warriors engaged the madmen and started slaughtering them. Although the madmen’s physical capabilities had been enhanced to inhuman levels, they were still no match for properly trained martial artists.

“Cunning bastards!” Yeop Pyung ground his teeth, having realized that he had played right into Geum Dan-Yeop’s hands. Unfortunately, he did not have the freedom of choice any longer. 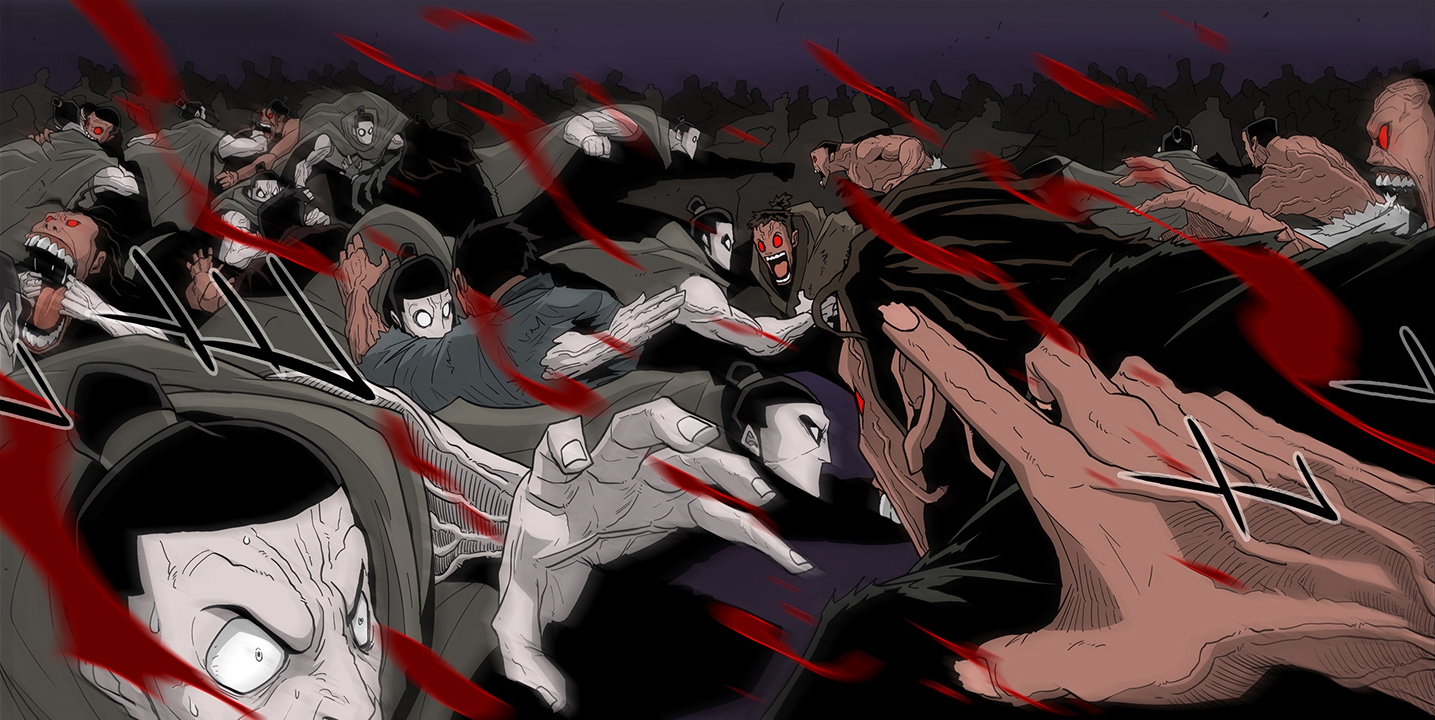 Yul Gyeong-Cheon’s eyes flashed with killing intent as he cut down at least one lunatic with every ruthless swing of his sword. “Even though you’re just annoying flies…” he muttered.

Finally, he fought his way through the rabble and closed in on Geum Dan-Yeop. Through a corner of his eye, he saw that Mak Kweng, the captain of the Iron Spirit Squad, had done the same. It was clear that they had laid eyes on the same target, the mastermind behind all their troubles, Geum Dan-Yeop.

This was a fight that would only end when one side was completely wiped out, as both sides had already gone into a battle frenzy. Even the Tyrant Fist Sect warriors were starting to lose their rationality as the metallic scent of blood filled their noses, accelerating their descent into madness.

Geum Dan-Yeop’s eyes darkened. An eye for an eye, a tooth for a tooth. That is the law of the gangho. I already decided to leave all my regrets and reservations behind. Those aren’t emotions my current self is allowed to have.

Suddenly, all of the Tyrant Fist Sect’s swords cried out at the same time, starting with quiet hums and then quickly rising to a crescendo.

“What’s happening?” The warriors looked around, perplexed. Their swords were reverberating in harmony without regard for their intent, and although each blade’s cry was insignificant, the combination of all the swords’ cries was louder than a wolf’s howl and more majestic than a dragon’s roar.

“Keuak!” The madmen faltered in the face of the singing swords, and the warriors covered their ears with their hands.

Just then, a man casually strode through the crowd.

Each time he walked past a sword, it cried out loud as if singing his praises.

Both Yeop Pyung and Geum Dan-Yeop widened their eyes in shock and disbelief.

Finally, the man stopped between Yeop Pyung and Geum Dan-Yeop. The swords instantly fell silent, making the deafening chorus just a moment before seem like a lucid dream.

No one dared to breathe for fear of disturbing the silence. All of their gazes were inevitably drawn toward the man, as if they had been hypnotized.

Jin Mu-Won, the Master of Swords, roared, “Are you two trying to start an era of chaos? If so, you’ll have to do it over my dead body.”

Translator’s Note: CHAPTER 100 WOOHOO! I admit that when I first started translating LNB, I didn’t think I’d ever get this far…but I made it with everyone’s support! Thank you and please comment more! Comments are motivation!