The busybodies in the gangho loved to categorize martial artists by their strengths and create ranking lists. Although they often had disputes, they would always agree that the strongest nine people in the murim were the Nine Skies of Heaven’s Summit. The names and titles of the Nine Skies were as follows:

Together, these nine masters held absolute dominion over the gangho. Some of them were famous for their martial strength, while others were renowned for being the leaders of the world’s most powerful sects.

Every single one of them had the qualifications to challenge the title of the World’s Strongest. However, because these nine people had never fought among themselves, it was impossible to determine who the strongest martial artist was.

Thus, the gangho paparazzi lumped them together and called them the Nine Skies. Of course, there were other martial artists who could possibly challenge these nine, including the Four Pillars of the Northern Army:

Although the Four Pillars had branched out from the great tree that was the Northern Army, in a mere ten years, they had built factions that were no less powerful than the old sects of the Central Plains.

Of course, most people knew that there were definitely other, less well-known grandmasters hidden within the masses, or living in seclusion, but no one thought that all these people put together would number more than thirty.

Even so, if these people had been born in different times, every one of them would have been a ruler of the gangho in their own right. Fortunately for the ordinary masses, though, their existence in the same era led to a balance of power and overall peace for the people.

Still, this peace is extremely fragile, like balancing on a knife’s edge.

With complicated feelings, Tang Gi-Mun looked at the middle-aged man in front of him sitting on a golden throne engraved with dragons rising up to the heavens. The man possessed a large stature that reminded one of a bear, and had an angular jaw, thick lips, a flat nose, and tiger-like eyes that seemed to see right through to a person’s soul. However, contrary to dull and clumsy bears, his aura was sharp and intense enough to crush a thousand men.

He was Jo Cheon-Woo, the “Fist Demon”, one of the former Four Pillars of the Northern Army, and the current head honcho of the Tyrant Fist Sect. 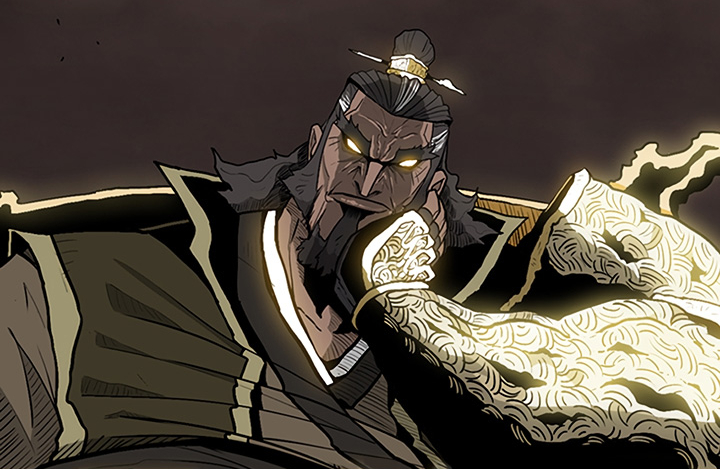 And right now, that Jo Cheon-Woo wore a very grave expression on his face. The fact that the Tang Clan had been ambushed within Yunnan Province, his territory, angered him greatly.

After a long pause, Jo Cheon-Woo growled, “Those guys have crossed the line.”

Tang Gi-Mun shuddered, as if he had just heard the roar of a fearsome tiger. Were the Four Northern Pillars always this strong? Of all the people I have met before, Jo Cheon-Woo has the strongest presence, as if everything in this hall is under his absolute control.

Although Tang Gi-Mun did not know martial arts, he was still a member of a martial arts clan. After meeting and talking to numerous warriors, he felt that he had developed a keen eye for people.

If he’s this powerful, I can see why he would be dissatisfied at serving another as a mere general in the Northern Army.

Those who had enough power to shake the world would never be content with playing second fiddle to another, and Jo Cheon-Woo was most certainly such a person.

“Did you manage to identify the assassins?”

“My subordinates have moved out to investigate, and it’s only a matter of time before the truth comes to light,” Jo Cheon-Woo replied confidently.

In the ten years since the Tyrant Fist Sect had been established in Yunnan, they had grown and developed at an extremely fast pace. In particular, Jo Cheon-Woo had placed the utmost importance on developing his information collecting department, known as the Eye of Heaven (天眼通).

After all, he’d seen with his own eyes how a lack of information had led to the destruction of the Northern Army.

Now, ten years since the creation of the Eye of Heaven, he was confident that they weren’t any inferior to any information organization within the Central Plains. That was also the reason why he was assured that his agents would definitely discover the truth behind the strange incidents in the region.

“Hopefully, we can find out who they are as soon as possible. From what I’ve experienced, they are very thorough when it comes to covering up their tracks.”

“Hmph! As long as they are in Yunnan, they won’t be able to avoid my spies forever. The moment we identify them will be the moment they breathe their last.”

The killing intent in Jo Cheon-Woo’s voice was obvious. Whoever was causing trouble in Yunnan had already been at it for more than six months, and with the disappearance of the merchant caravans, Yunnan’s economy had been badly hit.

Naturally, the Tyrant Fist Sect, which provided security for the caravans as their main source of income, went down along with it. Although they had indeed developed very rapidly over the last ten years, their economic foundations were still not solid enough to withstand such a drastic change.

In contrast, their neighbor in Yunnan, the long-established Diancang Sect owned ample farmland, and were self-sufficient even without the profits from trade.

In such a situation, not only was the Tyrant Fist Sect’s finances in dire straits, their reputation had also been badly affected. Things were so bad, they even needed aid from Heaven’s Summit’s investigation team to find out the cause of the problems.

Obviously, Jo Cheon-Woo couldn’t be happy in such a situation, but he didn’t have a choice. Along with the Tyrant Fist Sect’s recent decline, more and more doubts about his leadership ability had begun to appear, and he could no longer maintain absolute control over everything within the sect.

If Tang Gi-Mun, the Head of the Pavilion of Ten Thousand Poisons, had died in Yunnan, then the Tyrant Fist Sect would have undoubtedly found themselves in a real pinch.

“If I hadn’t been lucky enough to receive help, I would most certainly have died. The enemy was so thoroughly prepared to face the Tang Clan that we were completely at their mercy.”

“Unfortunately, I still don’t know his true identity or personal history. However, I’ll definitely meet him again soon. When that happens, I’ll introduce him to you, Sect Leader Jo.”

Inside a room in the Peace-Loving Inn, Jin Mu-Won unpacked his luggage. The inn was very shabby, but it occupied a space in a prime location right in the middle of the city, and although he was in a single room, the room was actually large enough for three or four people.

Kwak Moon-Jung looked around the room and exclaimed with surprise, “Wow! This is a lot better than I expected, for an inn that looks like it’s going to collapse anytime from the outside.”

“The chef here is supposedly pretty skilled, and the innkeeper has also allowed us to use their backyard.”

“Does this mean that I’ll be able to practice my martial arts there?” Kwak Moon-Jung’s eyes twinkled brightly. He had never been more keenly aware of how weak he was than during the battle with the red-armored warriors. Furthermore, although he practiced his martial arts whenever he had time while they were traveling, the fact remained that he’d had hardly any free time.

“I’m going to head out alone for a few days, so in the meantime, you should focus on your own training.”

Jin Mu-Won then left the highly-motivated boy behind and went downstairs. He saw a young waiter moving around between the tables and called out to him, “Kid.”

“You called for me, sir?” The waiter immediately came running toward him.

“I’m trying to find someone, and I’d like to ask you if you’ve heard of him.”

“Who are you looking for?”

“That’s what everyone calls him around here. It was rumored that he was once a genius, but one day, he suddenly lost his mind and went crazy. Because of that, we also refer to him as the Crazy Scholar (狂書生).”

“Yeah! I don’t know the details, but apparently, he just showed up one day and declared that he was crazy.”

“About that…” The waiter’s voice trailed off, as if waiting for something.

Jin Mu-Won smiled knowingly and handed the boy a coin.

The young waiter immediately burst into a large grin and continued, “If you keep heading south down the central boulevard, you’ll find a slum. Right in the middle of the slum, there’s a building called the West Wind Inn. You should be able to find him there.”

“Is he staying at that inn?”

“The building may be called an inn, but it’s actually a gambling den. I’ll have to warn you beforehand that it’s a pretty dangerous place though.”

“Thank you, I’ll make sure to be extra careful.”

Jin Mu-Won waved the gleeful waiter goodbye, walked out of the inn and was about to make his way to his destination when a passing patrol squad wearing the crest of the Tyrant Fist Sect caught his attention.

His expression unconsciously stiffened. No matter how much he tried to stay calm, he just couldn’t do it. The current Sect Leader of the Tyrant Fist Sect was the man he’d once dearly called uncle, and even though ten years had passed, that man’s face was still clear in his mind.

He sighed softly and shook his head. He was being irrational and irritated, but now was hardly the time to lose himself in hatred.

“I need to first save Uncle Hwang,” he told himself as he resumed walking toward the slum that the waiter had told him about.

Wherever a lot of people gathered, a slum would naturally form. It was a world for those who couldn’t blend into society or were pushed to the periphery by their circumstances.

As such, the moment Jin Mu-Won entered the slum, he could feel a change in the atmosphere. Unlike the rest of Kunming, the slum felt cold regardless of the weather.

It was frozen by the hearts of the poor; by their hatred and despair.

As Jin Mu-Won walked through the slum, he could sense an increased wariness from the people around him. An old man sitting on his doorstep stared at him suspiciously, while the children playing in the alleys ran away the instant they saw him.

He was watched carefully every step he took, as if the whole street had come to life just to monitor his movements.

Well, that wasn’t unexpected. These people were all born and raised in this slum, which cemented their solidarity. They probably knew everyone else in this area like the backs of their hands. The sudden appearance of a stranger like himself was bound to raise eyebrows.

Jin Mu-Won acted like he hadn’t noticed the slum residents’ gazes and smoothly strode toward his intended destination, the West Wind Inn. However, when he finally reached there, two muscular men got in the way of his entry. They scrutinized him thoroughly with intimidating looks, before one of them asked, “Why are you here? What do you want?”

“You, are you in cahoots with that swindler?”

The atmosphere tensed as many more big, burly men suddenly came charging out of the inn.