“Fucking son of a bitch!” Nam Goon-Wi’s face contorted horribly as his relaxed demeanor quickly faded away, revealing the true appearance of the monstrous beast under the mask. A chaotic torrent of chi gathered around him like a raging tsunami and crashed down upon Jin Mu-Won.

Although the pressure coming from Nam Goon-Wi was so intense that it made it hard to breathe, Jin Mu-Won strode toward the giant without a single change in expression.

Jin Mu-Won footsteps as he trudged on the forest ground stood out from the cacophony. Nam Goon-Wi frowned and pointed his sky piercer halberd at the young man.

The halberd cried out harrowingly and emitted a faint wave of chi as a blurry haze. The haze stretched out from the place where Nam Goon-Wi gripped the weapon, stretching and twisting itself until it covered the entire halberd.

“So that’s your Halberd Chi, huh?”

The sky piercer halberd (方天畵戟) was a very creative polearm. In addition to the spear tip, twin crescent-moon blades (月牙) were attached to the end in order to increase the slashing and slicing damage, rather than relying mostly on thrusting like the spear.1

This made for a very versatile weapon, but also one that was much harder to master compared to the simple spear. As a result, the once commonplace weapon became rarer and rarer among martial artists, to the point where the sky piercer halberd martial arts techniques were almost lost.

And yet, Nam Goon-Wi managed to wave around a sky piercer halberd as naturally as breathing. That could only mean that his martial arts were extraordinary, at least, extraordinary enough to intimidate most ordinary martial artists.

However, Jin Mu-Won was wholly unaffected by Nam Goon-Wi’s scare tactics. Rather, he was elated. This was his first time since entering the gangho that he was facing a tried and tested martial arts master, and not an as-yet inexperienced young talent.

Although Nam Goon-Wi said that, before he had even finished speaking, his figure had already disappeared from Jin Mu-Won’s line of sight, leaving behind an afterimage.

Jin Mu-Won did not panic, instead, he calmly raised Snow Flower and deflected the blow aimed at his head.

Every time Nam Goon-Wi swung his sky piercer halberd, the scream of a vacuum being formed in the air rang out threateningly. He moved in a way that maintained his absolute control over the area immediately around him, forming a domain of death.

Jin Mu-Won dodged all of Nam Goon-Wi’s attacks and drew Snow Flower from its scabbard. The cursed blade immediately started wailing as if it was throwing a childish tantrum.

Jin Mu-Won tightened his grip on the sword.

Instead of backing down or dodging, Jin Mu-Won leapt head-on into Nam Goon-Wi’s vicious embrace, all the while swinging Snow Flower.

The ring of metal on metal reverberated around the forest as Nam Goon-Wi’s halberd was mercilessly knocked aside. Jin Mu-Won took the opportunity to aim for Nam Goon-Wi’s chest, but the giant used his right foot as a pivot and spun around to the side to avoid a fatal blow.

Fireworks sparked in every direction as Snow Flower and the sky piercer halberd clashed over and over again.

Nam Goon-Wi spun his halberd like a windmill and mixed a variety of thrusts, slashes, and slices into his offensive, exploiting his weapon’s unique advantages to its maximum.

Despite Nam Goon-Wi’s flashy moves, Jin Mu-Won remained unshakable, choosing to calmly deal with Nam Goon-Wi’s wild barrage one strike at a time. Regardless of whatever Nam Goon-Wi did, all of his attacks bounced off the young man like it had hit an impregnable wall.

It wasn’t like either of them had used any special techniques. This was a clash of pure weapon skill, but both combatants were such masters that the most basic of strikes were no less effective than the top martial arts techniques in the gangho.

Like him, Jin Mu-Won was also making the most of his chosen weapon and neutralizing every single one of his opponent’s attacks. This kind of feat wasn’t one that was possible without a complete understanding of the sword’s characteristics.

Since when was there a martial artist so faithful to the basics in the gangho?

Most murim warriors were obsessed with learning higher-level martial arts and techniques, as they felt that doing so was the best way of improving themselves.

However, the more one mastered martial arts, the more one would realize the importance of a good foundation. That was how it had been for Nam Goon-Wi as well, so at a certain point, he had begun desperately training in the fundamentals.

Thanks to that, he was now able to bring out the full power and flexibility of the sky piercer halberd, and he even felt like he could defeat his enemies without using special techniques. Truth be told, he had been wholly disappointed in the opponents he had faced so far in the Central Plains. However, meeting Jin Mu-Won shattered all of his illusions.

Jin Mu-Won was matching him blow-for-blow using only the three basic movements for a sword: the thrust, slash, and parry. Not only that, he was also countering him using only the minimal amount of movement. It was a fighting style that emphasized efficiency above all.

Jin Mu-Won’s swordsmanship was so optimal, even Nam Goon-Wi, the enemy, couldn’t help but marvel at it. The young man wasn’t using a sword like a tool, rather, it was as if he had become one with the sword.

The term “one with the sword (劍身一體)” was probably created to describe this very state.

Nam Goon-Wi squeezed out more of his chi. As much as he admired Jin Mu-Won’s skill, they were enemies, and now that he had confirmed his enemy’s strength, it was time to do everything he could to defeat him.

Halberd Qi burst forth from the tip of Nam Goon-Wi’s weapon like he wanted to split the heavens in half, effectively increasing the length of his sky piercer halberd by three feet.

Even though three feet was a very short distance to a normal person, in a duel among masters, a tiny change in reach could mean the difference between victory and defeat, life and death.

Nam Goon-Wi was confident that with this, Jin Mu-Won would step back. However, as it turned out, he could not be more wrong. It was human instinct to back away when faced with danger or surprises, but Jin Mu-Won overcame that instinct and instead continued engaging Nam Goon-Wi in close-combat.

Jin Mu-Won was well aware that polearm users always held the overwhelming advantage at a distance, due to their weapons’ longer reach. If he retreated, it would be the same as him jumping into a sea of flames while carrying a sack of dry straw.

Nam Goon-Wi thrust his halberd and finally managed to injure Jin Mu-Won, but unfortunately for him, he missed the young man’s heart by a hair’s breadth. Although Jin Mu-Won’s clothes were slashed apart, and his blood splattered in the air from the wound, his sword swings never stopped or slowed, as if the injury hadn’t affected him in the least.

“Ghh!” Nam Goon-Wi let out a painful groan as Snow Flower created a long, deep gash across his shoulder. Fortunately, it was not a fatal blow, but it was still close enough that it left Nam Goon-Wi’s heart pounding.

It was only then that Nam Goon-Wi was finally convinced of Jin Mu-Won’s strength.

This dude’s the real deal. He’s not a superficial, half-baked martial artist like most of the warriors in the Central Plains.

He’s a true martial artist utterly dedicated to his craft and mastery of the sword even at the cost of his own life.

A strong feeling of anxiety and excitement gripped him. It had been a long time since he had last felt this way.

Suddenly, Nam Goon-Wi stepped back and looked at Jin Mu-Won, who immediately stopped swinging Snow Flower and stared back at him.

Nam Goon-Wi yelled, “Very well! I will grant you the honor of witnessing my True Blazing Halberd of the Fire Dragon (火龍眞炎戟)! I, Captain Nam Goon-Wi of the Crimson Ghost Corps (赤鬼兵團主), will face you, Jin Mu-Won, with all of my strength!”

A lion’s roar resounded across the skies as Nam Goon-Wi held his sky piercer halberd vertically as if building a bridge between Heaven and Earth. 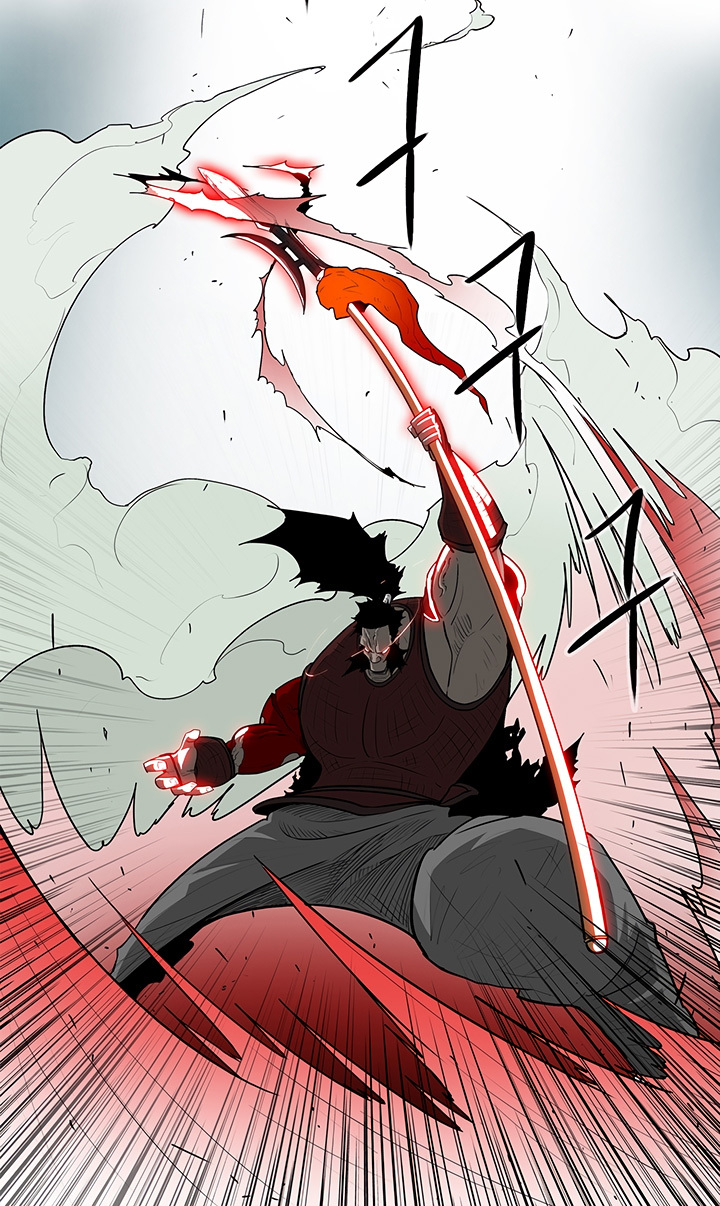 This was the starting stance for the True Blazing Halberd of the Fire Dragon, the martial art technique that Nam Goon-Wi practiced. However, this was the first time he was using it in the Central Plains as he had never run into anyone worthy enough to make him use it before.

Rather than giving Nam Goon-Wi a verbal answer, Jin Mu-Won simply pointed Snow Flower at him. It was a simple declaration of war, and one that placed immense pressure on Nam Goon-Wi.

The giant’s lips curled upward in a grin. Just like him, Jin Mu-Won had not yet displayed his full prowess.

The real fight was just beginning.

The chi quickly shaped itself into the form of a sky piercer halberd and overlapped itself with Nam Goon-Wi’s physical weapon as Halberd Flux.

Then, as if cutting grass, Nam Goong-Wi swept his sky piercer halberd across Jin Mu-Won’s knees, at the same time unleashing one of the True Blazing Halberd of the Fire Dragon’s ultimate moves— the Soul-Burning Fire Dragon (火龍燒魂).

Tang Mi-Ryeo hastily retreated backward, carrying Tang Gi-Mun on her back, and Kwak Moon-Jung quickly followed suit. The instant they got themselves out of harm’s way, the wagon they were riding on was smashed to pieces in the wake of the attacks.

A fight far beyond their imaginations was unfolding right in front of them.

Jin Mu-Won swung his sword again and again, as if it was an extension of his body. He was one with his blade.