A hundred days for the Spear (百日槍);

A thousand days for the Dao (千日刀);

And ten thousand days for the Sword (萬日劍).

However, it takes only one day to learn how to kill people.

Unfortunately, the gangho was a place swarming with monsters who killed people for a living.

With trembling eyes, Tang Mi-Ryeo looked at the hand that was being held out to her. On one hand, it was so shapely and unmarred that it was hard to believe that it belonged to a man, like the hand of a dainty woman who had never done any rough chores in her life.

On the other hand, she could sense a powerful strength behind that hand, a strength that could only be gained from having endured past countless difficult hardships and trials in life.

The man repeated, “Get on in.”

Tang Mi-Ryeo found herself inexplicably drawn to the man’s voice and grabbed his hand. The man then swiftly pulled her and Tang Gi-Mun up into the wagon and sat them down by his side.

“T-Thank you,” she stammered.

Jin Mu-Won, the man who had helped her, replied, “You don’t have to thank me. It’s only natural to help out a person in need.”

Suddenly, his expression stiffened. Jong-Ri Mu-Hwan and the Iron Brigade were marching toward him.

“What are you doing?” asked Jong-Ri Mu-Hwan, glaring fiercely at Jin Mu-Won. As if to support their vice-commander, the rest of the Iron Brigade wore the same look of fury and disapproval on their faces.

However, Jin Mu-Won did not waver.

“Why did you pick them up without permission? Didn’t you hear what I said just now?”

“I heard you very clearly.”

“And you still helped them? What the hell are you thinking…” Jong-Ri Mu-Hwan bit his lip so hard that it was bleeding. If eyes could kill, he would have already murdered Jin Mu-Won.

This man is completely uncontrollable. In order to proceed safely, we need to act cohesively as a group. Everyone has to learn to tolerate some amount of dissatisfaction and disharmony to optimize our strengths and minimize our losses, because that is what it means to be part of a group!

And yet, this man, Jin Mu-Won, repeatedly violated this basic rule. His deviant behavior is a threat to everyone in the caravan and will greatly affect the success of our mission. I cannot sit still and allow him to do whatever he pleases anymore!

“Please let them off your wagon and ignore them. You’re placing the safety of the entire caravan in jeopardy.”

“Commander Yong, do you feel the same way as the two of them?”

“Does it matter what I think? I mean, what can I do? If that’s what everyone wants, I haven’t got a choice but to follow them.” Yong Mu-Sung shrugged nonchalantly.

Although they did not express it as explicitly as Jong-Ri Mu-Hwan, most of the caravan members supported the Iron Brigade strategist. Their collective gazes fell upon Jin Mu-Won’s shoulders like a huge weight trying to crush his iron will.

The wordless pressure on Jin Mu-Won was so great, even Kwak Moon-Jung could feel it.

Still, Jin Mu-Won’s expression did not change. Seeing the lack of response, even Jong-Ri Mu-Hwan couldn’t help but feel a little intimidated.

After a long pause, Jin Mu-Won asked, “Do you honestly think that you’ll get out of here safely just because you left them behind?”

“As long as the possibility isn’t zero, it isn’t worth taking the risk of saving them. Your actions endanger not only yourself, but every single one of us. Since there is a good chance we can avoid trouble by just closing one eye, we shouldn’t escalate the problem. That’s why, I’m ordering you to abandon them now.”

Every word that came out of Jong-Ri Mu-Hwan’s mouth was like a razor-sharp dagger meant to pierce right through the listener’s heart, especially Tang Mi-Ryeo’s.

I see now that chivalry in the gangho is dead.

Before she had left the Tang Clan for the first time, Tang Mi-Ryeo still held delusions of the gangho’s grandeur and chivalry in her heart.

She’d imagined that the gangho was a place where justice was served, where the strong helped the weak, where corruption was punished.

However, the gangho that she had experienced was completely different. It was a cruel, merciless place where the instant one showed weakness, the beasts hiding in the darkness would immediately pounce on the opportunity and tear one to shreds.

Tang Mi-Ryeo glanced anxiously at Jin Mu-Won’s back, but he remained silent as if cowed by the escalating pressure emanating from Jong-Ri Mu-Hwan and the caravan members.

He was her only hope. Tang Mi-Ryeo sincerely prayed that Jin Mu-Won would stand up against the tyranny of the majority.

Finally, Jong-Ri Mu-Hwan delivered his ultimatum, saying, “Us, or her? Please choose now.”

“……” Jin Mu-Won did not answer immediately. His gaze was focused far into the distance, as if he was distracted by something.

Yong Mu-Sung had a grave expression on his face. Seeing this, Jong-Ri Mu-Hwan immediately shut his mouth.

Jong-Ri Mu-Hwan hurriedly spread out his chi-enhanced senses, and then he finally detected the thing that had alerted Jin Mu-Won and Yong Mu-Sung – killing intent.

The killing intent was spread out like a wall meant to cage them in, but the problem was, Jong-Ri Mu-Hwan had no idea when they started being surrounded. He turned to Jin Mu-Won for answers, but Jin Mu-Won didn’t take notice of him.

It was only then that the hard truth hit him.

Did he sense them around the time we started talking? How far away must they have been at the time?

“Well, I’ll be damned. That guy knew right from the get-go that we were surrounded. Even if we ignored these Tang Clan warriors, we wouldn’t have been able to escape from their encirclement.”

“Then he should have said so from the beginning…” Jong-Ri Mu-Hwan’s voice trailed off. Even he felt that he was being extremely lame and petty right now.

The killing intent was not directed at only Tang Mi-Ryeo and Tang Gi-Mun, but at everyone in the vicinity. That meant that everyone here was a target for execution.

Jin Mu-Won said to Kwak Moon-Jung, “No matter what happens, never leave my side.”

“What a pity. That was a really interesting show you guys put on, and I planned on watching you until the end, you know? Still, even though it was incomplete, I quite enjoyed the performance.”

A large man with a beard like a hedgehog appeared from behind the trees, clapping his hands in applause. On his back, he carried an intimidating sky piercer halberd.

As the man approached them, the Iron Brigade mercenaries and the escort warriors quickly drew their weapons.

The man looked around for a bit, and when his gaze finally settled upon Jin Mu-Won, his eyes lit up in interest.

“My name’s Nam Goon-Wi. What about you?”

“What a nice name. So, when did you find out that we were surrounding you? The moment we started?”

“Kukuku! I thought so. Now, you seem to be confident of leaving here alive, but that just leaves me speechless, you know?”

Although the giant who called himself Nam Goon-Wi giggled childishly until his face turned red, no one in the White Dragon caravan dared to act rashly. The man himself was insane and dangerous, but the fifty red-armored warriors who appeared behind him were no less threatening, each having an aura as strong as the mercenaries of the Iron Brigade.

Just who on earth are these people? It’s like they’re perfect copies of each other, crafted from the same mold, with identical martial arts and auras! Even the most powerful factions in the gangho would be hard-pressed to gather the finances, resources, and elixirs required to build such a military force. Most importantly, I’ve never seen the red armor they’re wearing in the Central Plains before. Jong-Ri Mu-Hwan was baffled.

He carefully asked, “Where are you people from? Heaven’s Summit?”

“What a stupid question. What makes you think that we’ll give you an answer?”

“Will you let us go if we just leave quietly?”

“Wow, I’ve never met someone as shameless as you before. Why would I go to such lengths to surround you if I planned to let you escape? I thought you looked kind of smart, but I guess you’re just looks and no brains after all.” Nam Goon-Wi’s lips curled up in a sneer. He only held back for so long as toying around with Jong-Ri Mu-Hwan was kind of fun.

His mission was to eliminate every member of the Tang Clan’s expeditionary force without revealing his identity. Knowing the Tang Clan’s strength and the fact that they belonged to Heaven’s Summit, he couldn’t afford to get careless.

Jong-Ri Mu-Hwan’s face crumpled at the insult, but Nam Goon-Wi had already lost all interest in him, instead turning toward Jin Mu-Won and asking, “Hey, if I asked you nicely, would you kindly hand those two over to me and go away?”

“Don’t be ridiculous. Why would I let them board my wagon if I was going to abandon them? I thought you looked kind of smart, but I guess you’re just looks and no brains after all.”

Having been given a taste of his own medicine, Nam Goon-Wi burst into laughter, “Kukuku! Damn do I love this guy! Kuhahaha! He dares talk to me, Nam Goon-Wi, like that. What an interesting fellow!”

The deafening sound of Nam Goon-Wi’s roaring laughter rang in their ears and reverberated inside their skulls, making the faces of the Iron Brigade mercenaries and White Dragon escorts turn as white as a sheet.

Yong Mu-Sung yelled, “Gather your chi and protect your hearts1 from bursting!”

The martial artists immediately did as Yong Mu-Sung instructed, but it was already too late for some of them. Nam Goon-Wi’s unexpected sound wave attack had caught them off guard and caused internal injuries before they could react.

What powerful chi! Jong-Ri Mu-Hwan’s eyes trembled in shock and dismay. Only a true master above peak level could cause internal injuries just by laughing.

“If you won’t hand them over to me, then you leave me no choice but to kill everyone here.”

Yong Mu-Sung quickly stepped in front of Jong-Ri Mu-Hwan and said, “From now on, I’m in charge.”

“This fight is beyond your abilities.”

“Fine… I understand.” Jong-Ri Mu-Hwan was frustrated, but he bit his lip and retreated toward the back obediently.

Yong Mu-Sung scratched his head and looked at Nam Goon-Wi, saying, “Well, I didn’t mean to run into you red ghosts, but since I did, I warn you that you shouldn’t underestimate the Iron Brigade. Just because I don’t like annoying things and fighting stupid battles, doesn’t mean that I’m weaker than you.”

Yong Mu-Sung grinned broadly, showing his gums. His aura burst out from him, and in response, the Iron Brigade mercenaries also released their killing auras.

Like a massive red tsunami, the red-armored warriors came crashing down upon the Iron Brigade and the White Dragon warriors. 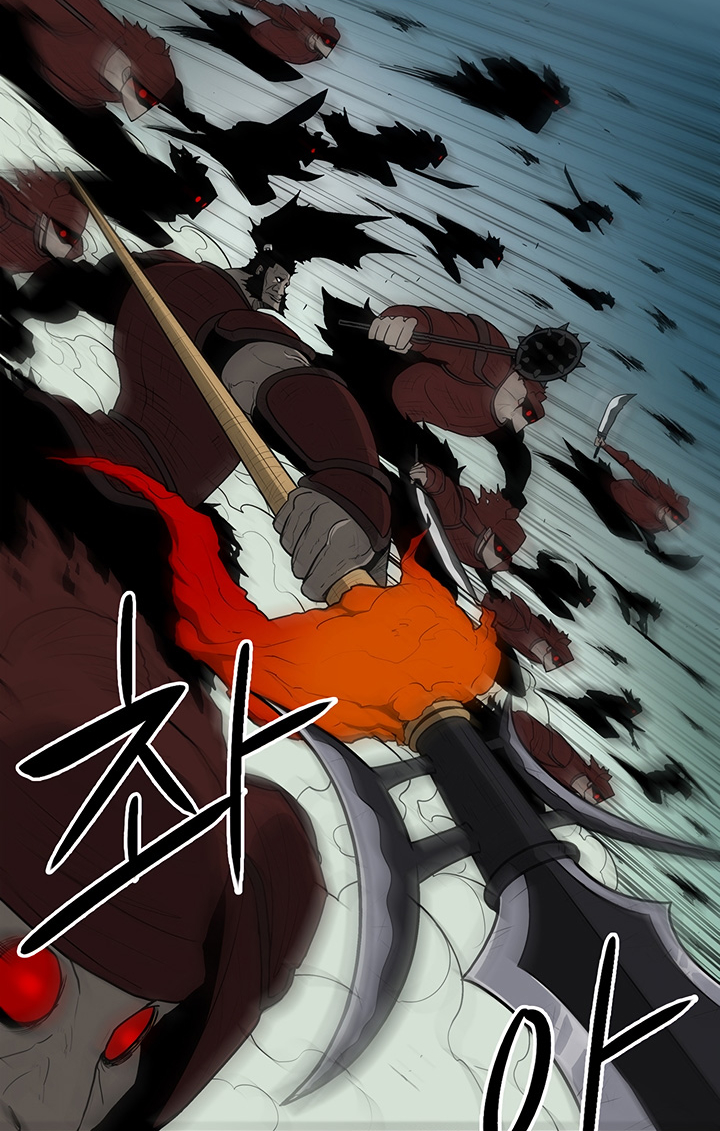