After Jin Mu-Won and Yong Mu-Sung had left, Mae Wol-Ryung appeared to be alone in the room.

A hidden door on one side of the room opened, revealing an old man dressed in all black. The old man’s face was covered in ugly scars, giving him a terrifying appearance.

This old man, whose name was Heuk-No, approached Mae Wol-Ryung and asked, “You called for me, Young Miss?”

“Did you get a good look at Master Jin?”

“What’s your opinion on him?”

“With my abilities, it’s difficult for me to judge him.”

“Young Miss, do you suspect that he’s someone special?”

Mae Wol-Ryung sighed and took off her veil, revealing her dazzlingly beautiful face. It was a face that could only belong to a woman in her twenties, an age where the sparkle of youth coexisted with the seductiveness of a mature woman.

Five years had already passed since she had become the branch manager of the Black Moon’s Sichuan Branch. During that time, she had met a lot of distinguished and renowned people, from faction leaders such as Yong Mu-Sung to the elders of the large sects and clans.

Despite her young age, she had never felt the least bit intimidated by them. Rather, she used her experiences interacting with those leaders to improve her judgment skills and ability to read people.

However, Jin Mu-Won was different. She hadn’t been able to glean any useful information about him just by observing his speech and body language. It was as if he were a perfectly ordinary person, except for the fact that Yong Mu-Sung had acknowledged him as a companion.

Even so, there’s something about him that really bothers me, and I can’t get him out of my mind… This has never happened to me before! I’ve seen plenty of men who are way more handsome and famous than he is, so why is he the first one to perk my interest?

Just what is it about him that I find so intriguing…?

Mae Wol-Ryung recalled Jin Mu-Won’s appearance and mulled over it for a while before suddenly coming to a realization.

It’s his eyes, or rather, the look in his eyes. Unlike other young men his age, his eyes are not filled with hopes and dreams, but at the same time, are also not distant and emotionless.

Jin Mu-Won’s calm eyes did not belong on the face of a young man in his twenties. Only a veteran warrior who had experienced the countless ups and downs of the gangho could have eyes like that.

Just what on earth did he go through to end up like that?

Mae Wol-Ryung tapped her chin with her finger, while Heuk-No watched her in silence. He understood all too well that she had a habit of doing that whenever she was lost in thought.

“As soon as Jin Mu-Won steps into Yunnan, have one of the Secret Moon (秘月) spies tail him.”

“Which rank should the spy be?”

“Choose one from the Heaven Rank.”

Thus, when Heuk-No heard that his mistress was using such a precious resource on the likes of a gangho newcomer, he was astounded. Throughout the long history of the Black Moon, this was a first.

“Is there truly a need to go to such lengths?” 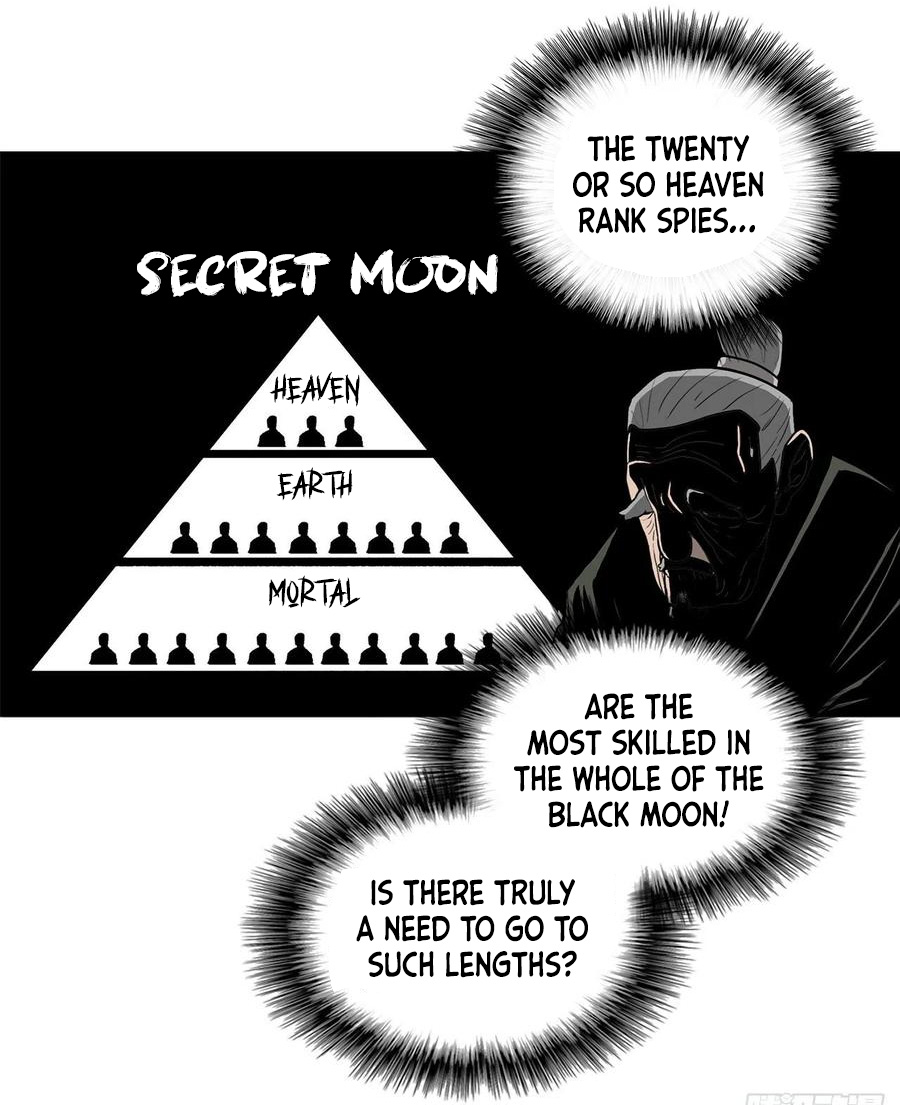 “I’m not sure yet. However, in order to collect information in Yunnan, we’ll have to send at least one of the Heaven Rank spies there anyway, so regardless of whether Jin Mu-Won is interesting or not, we won’t be taking a loss.”

“Understood. I will select a suitable person from the Secret Moon and send them to Yunnan. By the way…” Heuk-No hesitated.

Mae Wol-Ryung smiled encouragingly at him and said, “Go on.”

“…Why did you tell Yong Mu-Sung that the Deathshroud was targeting him?”

The Black Moon was not a charity organization. They never revealed even the smallest piece of information to their customers unless they were paid an appropriate price, and there was no way that Mae Wol-Ryung wouldn’t know this.

“It was because I wanted to confirm something.”

“Heuk-No, how much do you know about the Iron Brigade?”

“That’s right. Because of that achievement, the Iron Brigade secured its position as one of the strongest mercenary squads in the gangho.”

For a mercenary squad, their business was proportional to their reputation, and the Iron Brigade had indeed made full use of their good reputation to earn huge profits as well as the admiration of many young martial artists.

Mae Wol-Ryung’s smile widened. “Isn’t it odd? Do you really believe that those guys deserve their prominent position in the gangho? And what about the rumor that they have never failed a single mission? Is that actually possible?”

“In other words, you think that the Iron Brigade is hiding or falsifying something. Right, Young Miss?”

“It’s just a lingering suspicion, but I still want to confirm the truth of the legend. At least, from what I can see, they are indeed a bunch of very intelligent folks. People like them have their uses, you know?”

“Anyway, there is a storm brewing in Yunnan, but we still don’t know if it’s one that will remain contained within the province, or if it will eventually engulf the whole world. We can only prepare for the worst,” Mae Wol-Ryung concluded, staring blankly into the distance as if the world was reflected in her eyes.

Jin Mu-Won and Yong Mu-Sung walked side-by-side out of the Black Moon branch, but unlike when they entered, Yong Mu-Sung now wore a scowl on his face.

“…A third faction in Yunnan. What a headache.”

“Didn’t you already guess that a third faction was involved during the meeting in the inn?”

Yong Mu-Sung had spent two gold yuanbao just to confirm that one fact, but it was well worth the price. Knowing who their potential enemies were meant that they could prepare for it and hence mitigate the threat.

“By the way, who is Neung Won-Pyong? And what is the Deathshroud?”

“Ah, that old guy?” Yong Mu-Sung sighed and suddenly stopped in his tracks.

Jin Mu-Won stared at him and waited for him to continue.

“Neung Won-Pyong is the customer I was working for until right before I joined the White Dragon caravan. I escorted him from the Qaidam Basin in Qinghai all the way to Sichuan.”

“Did something happen with him?”

“He found a very valuable item in the Qaidam Basin. So valuable, that if that item’s existence became known to the world, he would be extremely troubled. In our mission contract, we pledged that we would keep this item a secret, but seeing as he employed the Deathshroud, it seems that he didn’t trust us after all.”

“That means the Deathshroud is…”

“An assassin organization, obviously. Only dead men tell no tales, you know?”

Although Yong Mu-Sung spoke jokingly and casually like he always did, his eyes were not smiling. Instead, they were deep and intimidating, like an endless abyss.

Jin Mu-Won wasn’t the least bit surprised by that. This serious Yong Mu-Sung was probably the real him, while the friendliness was just an act he put up.

Suddenly, as if he had finally noticed the tense atmosphere, Yong Mu-Sung grinned, patted Jin Mu-Won on the shoulder, and said, “Hahaha! Don’t worry and just leave everything to us. We’ll make sure that our journey to Yunnan is as smooth-sailing as smooth can be.”

“In that case, thank you for believing in us. Also, I need to go somewhere alone, so would you mind returning to the inn without me?”

“I’ll buy you a drink later. We can talk more then.”

Jin Mu-Won shrugged in answer to Yong Mu-Sung’s offer, and the two men went their own ways. As Yong Mu-Sung walked off, Jin Mu-Won stared at him for a while, then began heading back to the Revitalization Inn.

Unlike Yong Mu-Sung, he wasn’t particularly concerned with the state of affairs in Yunnan. It wasn’t his problem, and there was probably no room for him to intervene, anyway.

Instead, he was far more intrigued by another point that Mae Wol-Ryung had brought up, and that was the possibility that Hwang Cheol was still alive.

After returning to the inn, Jin Mu-Won sat down on a chair and watched Kwak Moon-Jung circulate his chi using the Three Origins Meditation Technique. This was something that Kwak Moon-Jung did every day without fail, even though it was extremely boring.

Crimson Fang, Kwak Moon-Jung’s new greatsword, lay next to him. The sword’s hilt was covered in sweat and grime; proof of how hard the boy had trained his swordsmanship earlier.

“Keep going like this and don’t stop. So what if your improvement is slow? Does it matter how long it takes as long as you know you’ll eventually reach the peak?” Jin Mu-Won whispered, both to Kwak Moon-Jung and as a reminder to himself.

After all, he understood very well that as long as one remained patient and never gave up, even at a snail’s pace, one would be able to travel a thousand miles to the final destination… Although he had no idea what reaching that final destination entailed, being only partway through the journey himself.

Suddenly, he heard a commotion outside the inn. He stood up, walked over to the window, and looked outside. There, he saw the mercenaries of the Iron Brigade, including Yong Mu-Sung, gathering.

Sensing his gaze, Yong Mu-Sung looked up and met his eyes. In that instant, Jin Mu-Won noticed the cunning grin on Yong Mu-Sung’s face, and was hit by a strange sense of foreboding.

Yong Mu-Sung waved to Jin Mu-Won, then left the inn grounds with the rest of the Iron Brigade.

Jin Mu-Won frowned. I have a bad feeling about this…

<
Previous Chapter
Chapter 70: Yong Mu-Sung, The Commander of the Iron Brigade (2)
>
Next Chapter
Chapter 72: Just Because We’re Travelling Companions, Doesn’t Mean We Have to Agree with Each Other (1)