Kwak Moon-Jung wanted to speak, but the only sound that came out of his mouth was a painful gasp for air. He pursed his lips in agony.

Mu-Hae raised his Bamboo Blade up high, saying, “Because of your arrogant and impertinent meddling, you’re going to have to pay the price along with this father-daughter pair!”

Seol-Goong and the other Taoist watched the interaction between Mu-Hae and Kwak Moon-Jung with twisted delight. As they expected, Mu-Hae did not hesitate to swing his sword down on Kwak Moon-Jung.

Kwak Moon-Jung squeezed his eyes shut. The whistling of a blade slicing through the air rang in his ears. However, the pain that he was expecting…never came.

At Mu-Hae’s sudden cry, Kwak Moon-Jung slowly and carefully opened his eyes. His vision was blocked by a man’s broad back.

Kwak Moon-Jung’s eyes widened, as if they were going to pop out of their sockets. The man wearing a red and brown coat, with his left hand placed behind his back and holding Snow Flower, could only be Jin Mu-Won.

Kwak Moon-Jung shifted his gaze a little, and to his absolute shock and horror, Jin Mu-Won had clamped Mu-Hae’s Bamboo Blade in-between his index and middle fingers. He couldn’t see the blade very clearly from his position, but he could at least tell that all of Jin Mu-Won’s fingers were still intact. 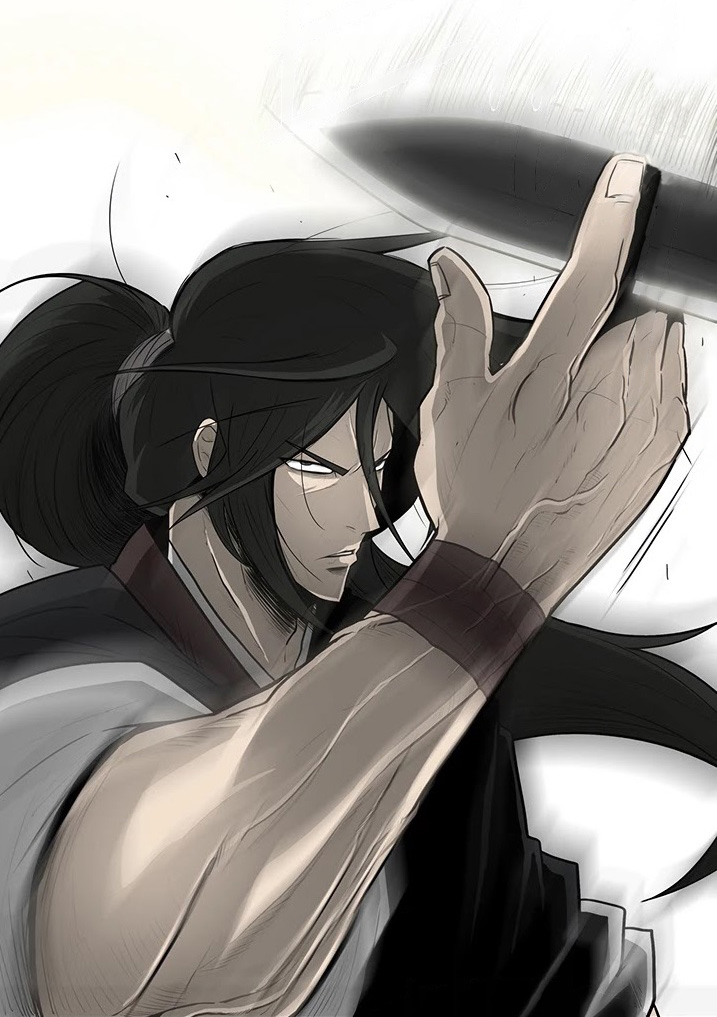 On the contrary, the look on Mu-Hae’s face was one of confusion. The Taoist had never considered that his sword would be blocked, especially not right now.

He stopped my blade with his bare hands!?

He’d heard of people performing such feats before, but it was definitely rare and required a lot of training. Most importantly, one could only do such a thing if they were stronger or at least equal to their opponent in strength.

Mu-Hae hadn’t injected any chi into his blade, but it was still a sword slash from a martial arts expert. The fact that the man in front of him had blocked it with just two fingers was definite proof that he was no weakling.

Mu-Hae withdrew his sword and glared at Jin Mu-Won, saying, “Who are you? Are you doing this despite knowing that I am a disciple of Kongtong Sect?”

“I am this boy’s hyung. Now that you know who I am, are you still going to insist that I have no right to intervene?” Jin Mu-Won expressionlessly replied.

Mu-Hae’s face twitched. He said, “Ha! I get it now. The reason this boy was so cocky must be because you, a hidden master, is protecting him.”

Mu-Hae had misunderstood the situation, but Jin Mu-Won wasn’t about to bother explaining it to him. Kwak Moon-Jung’s safety was much more important than whatever this Taoist thought of him.

“You should be able to forgive this child now, right? I’m sure that he has learned his lesson after the harrowing experience he has had to go through today.”

“What? Are you saying that he should be allowed to get away scot-free without any punishment? That’s not the way of the gangho! If I let this go today, the cycle of vengeance will never end.” Mu-Hae scowled.

Jin Mu-Won sighed. Here was a narcissist who wallowed in his own grief and rage, but was utterly incapable of sympathizing with others’ pains. This kind of self-centered person would never forget a grudge, no matter how minor it was. Rather, they would gnaw on their spite over and over again, feeding their resentment. Thinking about it, today’s conflict had happened for this very same reason.

Mu-Hae asked, “Which sect are you from? Or do you not even have the courage to declare your affiliations?”

“I don’t see why I have to answer that question.”

“Bah! Things have already reached this point, and you’re still trying to hide your identity? What a joke. Aren’t you looking down on our Kongtong Sect too much?”

“This has nothing to do with the Kongtong Sect. This is a personal issue, between you and me.”

“Am I wrong?” Jin Mu-Won looked straight into Mu-Hae’s eyes.

Mu-Hae flinched. Jin Mu-Won’s gaze was neither piercing nor vicious, and he did not feel any murderous intent behind that stare. Even so, he was bewildered by the fact that he simply could not bring himself to meet the young man’s eyes.

“You dare threaten me? Me, Mu-Hae of Kongtong?” he growled.

“I’m not threatening you. I’m imploring you to forgive a child. So, what’s your answer?”

“Is this how a person begging for mercy is supposed to behave?”

“Oh? Then…how am I supposed to behave?”

“Cut off one of that child’s arms. Do that, and I will forget everything he has done today.”

Mu-Hae turned toward Kwak Moon-Jung. He still hadn’t forgiven the child, and he probably wouldn’t even after ten years.

Jin Mu-Won shook his head, saying, “I refuse. If everyone did things like you, Taoist, no one in this world would have any arms left.”

“Are you provoking me on purpose? Because you’ve succeeded! DIE!” roared Mu-Hae, unleashing one of the Kongtong Sect’s ultimate techniques, the “Lesser Yang Sword (少陽劍)”.

What a ruthless killing technique. Even though this man is a Taoist, he swings his blade with no mercy.

The emotion in Jin Mu-Won’s eyes vanished, replaced by an eerie calm. He held up his right index and middle fingers, imitating a sword, and swiftly poked Mu-Hae’s blade.

Mu-Hae sniggered, “Hmph! Do you really think I’ll allow you to stop my blade with your bare hands again!?”

Mu-Hae injected his chi into his sword, intending to slice off Jin Mu-Won’s fingers. In response, the Bamboo Blade glittered with a sharp light.

Kwak Moon-Jung and Im Jin-Yeop cried out in warning. In their eyes, Jin Mu-Won’s fingers looked like they were about to be cut off.

However, the moment Jin Mu-Won’s fingers came into contact with Mu-Hae’s sword, something odd happened. The sword point pierced right through an afterimage of his fingers, which gently bumped against the middle of the blade.

Cracks appeared on the part of the blade that Jin Mu-Won had just touched. The smile on his face vanished.

The Bamboo Blade shattered, scattering blade fragments in every direction. Mu-Hae’s face was cut by one of the fragments, but he did not feel any pain. He could not.

He stared blankly at the sword hilt in his hand. There was no blade.

The Bamboo Blade was the symbol of a disciple of the Kongtong Sect. To Mu-Hae, who valued his reputation more than anything else, it was as precious as his own life.

That Bamboo Blade had shattered after being poked by Jin Mu-Won’s bare fingers. Mu-Hae felt like the world as he knew it was falling apart all around him.

In truth, Jin Mu-Won hadn’t just poked the sword, he’d used the Weapon-Shattering Finger (碎兵指), a technique that he had randomly created years ago while failing repeatedly at swordsmithing. 1

To Mu-Hae, the Bamboo Blade was a famous and perfect sword, but in Jin Mu-Won’s blacksmith eyes, it was covered in imperfections.

“Senior Brother!” screamed the other middle-aged Taoist, whose name was Mu-Wol. He hadn’t expected Mu-Hae to lose, and hadn’t managed to react in time.

He quickly drew his own Bamboo Blade and swung it toward Jin Mu-Won with all his strength. He’d seen what happened to Mu-Hae after underestimating Jin Mu-Won, and he wasn’t about to make the same mistake.

Jin Mu-Won swiftly took one step backward. Mu-Wol’s blade whizzed past his head, missing him by a hair. Like Mu-Hae, Mu-Wol was also aiming for his life.

Jin Mu-Won’s voice echoed around the inn, causing Mu-Hae and Mu-Wol’s faces to turn red in rage and embarrassment. In one sentence, Jin Mu-Won had denied their very reason for existing.

Mu-Hae and Mu-Wol charged at Jin Mu-Won. Mu-Hae, whose sword was broken, used the Cloud Chasing Fist (追雲拳), while Mu-Hae swung his blade. The two Taoists moved in perfect unison, and it was clear that they often trained together.

The entire interior of the inn was swept up in a giant storm created by the wind from Mu-Hae’s fist and Mu-Wol’s sword, smashing all the furniture. Within that wild tempest, Jin Mu-Won moved around freely and gracefully. Whenever the two Taoists attacked, he would step backwards, and whenever they retreated, he’d close the distance and strike.

Seeing that, Im Jin-Yeop couldn’t help but exclaim, “It’s like he’s dancing in the wind.”

As if he didn’t feel threatened at all, Jin Mu-Won never drew his own blade. He simply raised a finger and aimed for Mu-Wol’s sword. Although Mu-Wol had already seen what had happened to Mu-Hae’s blade, he didn’t think that Jin Mu-Won would have such good luck a second time around.

Instead of being wary, Mu-Wol was delighted. He poured his chi into his sword and swung it at Jin Mu-Won.

The sword clashed with the finger.

Now that their weapons were broken, both Taoists had no choice but to use their fists.

Mu-Wol stumbled, and Mu-Hae’s right arm hung limply by his side, his shoulder red and swollen. During one of the clashes with Jin Mu-Won, his right arm had gotten dislocated at the shoulder.

Mu-Hae’s eyes glittered with disbelief. He didn’t even know when or how Jin Mu-Won had attacked him.

Suddenly, Jin Mu-Won stopped in his tracks. Without taking his eyes off the two old Taoists, he reached out behind him and grabbed a sword.

“Huh!?” blurted Seol-Goong, who had attempted to sneak up on Jin Mu-Won while he was distracted.

As the fight progressed, Seol-Goong had gradually understood that his two senior brothers stood no chance of winning against Jin Mu-Won. At least, not if they stuck to normal methods. Thus, he had thought to launch a sneak attack on Jin Mu-Won.

Unfortunately for him, though, Jin Mu-Won’s All-Encompassing Cognizance detected his presence before he could do any harm.

Jin Mu-Won shot Seol-Goong an icy glare, saying, “Boy, you’re a coward. If someone like you became the next sect leader, then Kongtong Sect is most certainly doomed.”

Jin Mu-Won twisted the blade in his grip.

The sound of Seol-Goong’s right arm breaking was quickly drowned out by his ear-piercing shriek.