Jin Mu-Won stared blankly as Dam Soo-Cheon and Shim Won-Ui disappeared into the distance. They were abandoning their own subordinates and running away. Even so, the Wardens were still frantically fighting against the Gray Wolves of Chaos in order to buy them time to escape.

He shook his head and sighed. I pity these Wardens.

The Wardens were sacrificing themselves one after another just so that their master could run away, and yet, no one was complaining.

This was the nature of most murim warriors. Sadly, average disciples of famous schools in the gangho were all trained to be this way since young. They were so brainwashed that they did not fear death as long as they thought that it was an honorable death. However, to Jin Mu-Won, they might as well be dogs for how loyal they were to their masters.

What’s the point of dying for a master who doesn’t appreciate you, no matter how honorable it might be? And even if it was an honorable death, why would honor even matter when you’re already dead?

No matter how much humiliation one must endure, the most important thing is survival, for the dead tell no tales, and only the living can stand up for truth and justice.

This was Jin Mu-Won’s motto in life.

Suddenly, he was jolted out of his musings by Eun Han-Seol’s panicked voice.

“Mu-Won, no matter what you do, don’t stand in front of me.”

Tae Mu-Kang was quickly closing in on them with killing intent so strong, it had materialized and was stirring up a tornado that sucked in the air and wrecked the earth.

From the battle with Dam Soo-Cheon, Jin Mu-Won could tell that Tae Mu-Kang was incredibly strong. However, watching a battle and experiencing Tae Mu-Kang’s strength for himself were two completely different things.

The pressure from Tae Mu-Kang’s aura was making it hard to breathe, and he felt his consciousness start to fade.

So this is why Han-Seol was trembling. In the face of such a monster, anyone would be frightened.

Eun Han-Seol squeezed out every last bit of her energy.

Seeing this, Tae Mu-Kang snorted, saying, “It seems that we have finally reunited once again, little bitch.”

“You guys are the ones who made me like this, you know? Since you turned me into an undying monster, you should pay the price for it, right?” The Chaos Demon released his killing intent.

The heavens trembled, and the earth shook.

Eun Han-Seol defended against Tae Mu-Kang’s aura using her martial art, the Art of the Silver Soul (銀魂心決)1. In a flash, her eyes and hair turned from black to silvery-white. 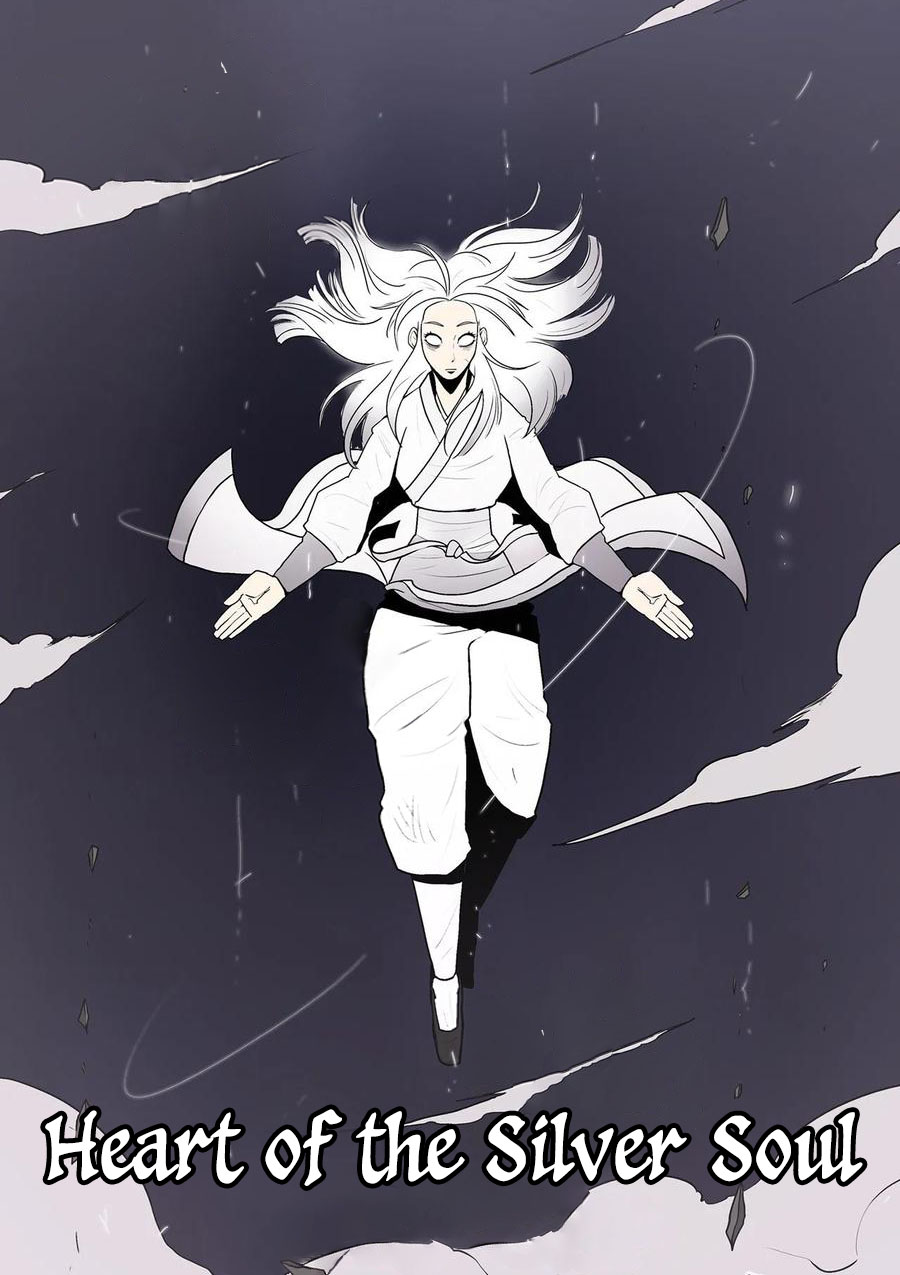 “Ugh!” Under pressure from both Tae Mu-Kang and Eun Han-Seol’s aura, Jin Mu-Won had no choice but to step backwards.

Eun Han-Seol’s silvery-white hair reminded him of a legend that he had heard long ago, about the Four Great Demon Generals of the Silent Night.

When the blue wind speeds across the starless sky, A shadow descends upon the world. aggAnnoy10 When the dark wings spread wide, A divine spear glows with light. When the axe of the devil splits the mountain, The witch sings in the pitch blackness of night. The Shadow of the Blue Wind (靑風魔影); The Black-Winged Divine Spear (黑翼神槍); aggAnnoy18 The Mountain-Splitting Devil Axe (破山魔斧); And the Witch of the White Night (白夜魔女).

In place of their leader, the mysterious Lord of the Night (夜主), the Four Great Demon Generals led the armies of the Silent Night. 2

During the war with the Central Plains, each of these generals had slaughtered hundreds of the most powerful martial artists, to the point where the mere mention of the words “Four Great Demon Generals” had become taboo. It was said that not even the Nine Skies of Heaven’s Summit were willing to take them on in direct combat.

Generation after generation, the titles of the Four Great Demon Generals were passed down from master to disciple, ensuring the continuation of the fearsome legends.

All four demon generals possessed several unique traits. In particular, the Witch of the White Night was known to have silvery-white eyes, which was the hallmark of a practitioner of the Art of the Silver Soul. Besides the silver-white eyes, Jin Mu-Won had also heard rumors that mastering the Art of the Silver Soul would turn one into a heartless, emotionless, cruel witch.

And right now, Eun Han-Seol was clearly displaying the traits of the Witch of the White Night.

Is Han-Seol the successor to the Witch?

It had occurred to him before that perhaps Eun Han-Seol was connected to the Silent Night. Still, he never imagined that she would actually be the heir to the Witch of the White Night, one of the Four Great Demon Generals.

So that means, the ‘master’ that she talked about was the Witch of the White Night.

Until a few dozen years ago, the Northern Army had been at constant war with the Silent Night. Back then, the Witch of the White Night had slaughtered many martial artists, including the warriors of the Northern Army.

Violence breeds hatred, and hatred gives rise to violence. Just like that, throughout the ages, a never-ending cycle of hatred and violence is passed down from generation to generation.

Tae Mu-Kang and Eun Han-Seol’s attacks slammed into each other, resulting in a huge shockwave. They exchanged blow after blow, their clothes and hair dancing furiously in the raging wind. Jin Mu-Won retreated far from the battlefield and watched them blankly.

Waves of murky energy poured out of Tae Mu-Kang, making him seem like a demon god.

On the other hand, Eun Han-Seol looked like she was struggling just to defend herself.

While fighting her master, Tae Mu-Kang had already absorbed and digested the characteristic chi of the Art of the Silver Soul. Thus, he could convert his own chi into one that perfectly countered Eun Han-Seol’s.

Eun Han-Seol understood this fact, so she focused only on defense in order to buy time for her master to arrive and save her. She had to prevent Tae Mu-Kang’s Penetrating Energy from being injected into her at all costs, or everything would be over.

“Kuheuk!” coughed Eun Han-Seol, blood flowing from her lips. Although she was doing her best to defend, every time she took a hit from one of Tae Mu-Kang’s fists, the force would be transmitted through her limbs to her internal organs, damaging them.

She was painfully aware that she was no match for Tae Mu-Kang. To her, her best option had been to run away while Tae Mu-Kang was distracted by Dam Soo-Cheon. Even now, she could still choose to escape.

However, she didn’t do that, because Jin Mu-Won was standing right behind her.

He’s a man who helped me without asking for anything in return; a man who didn’t even want to ask who I was. Maybe others wouldn’t be able to understand why he did that, but I do.

*Loneliness. Solitude. A heavy weight that always hangs on the heart. *

I understand, I really do. Because I’m the same as him.

When I look at him, it’s like I’m looking at a mirror; at another version of myself. Maybe that’s why I can’t leave him alone; why I always want to be near him. aggAnnoy04

A silvery-white mist gathered in Eun Han-Seol’s palm to form a Palm Flux, which she slammed on Tae Mu-Kang’s Rebound Flux.

Tae Mu-Kang’s huge body shivered a little, but the impact hadn’t been strong enough to hurt him or even push him back. He charged toward Eun Han-Seol like a stampeding elephant.

Eun Han-Seol tried to resist Tae Mu-Kang’s charge, but it was futile. She was continually being pushed back, her planted feet digging out a trench as they dragged across the ground.

She was like a candle in the wind that could be snuffed out anytime.

At this rate, she would die for sure.

Eun Han-Seol was sent flying. When she landed on the ground, she coughed up blood yet again.

Jin Mu-Won’s heart sank, and he couldn’t help but clench his fists in worry and frustration. aggAnnoy03

Eun Han-Seol struggled to her feet. She had to find a way to continue defending. How much longer can I last? Since the beginning, I’ve never once thought that I could defeat Tae Mu-Kang. After all, even Master, with all her strength, was severely injured by him.

Tae Mu-Kang’s punches landed on Eun Han-Seol unceasingly, like waves crashing on a beach. Her skull was fractured and bleeding, and a huge gash appeared on her shoulder. Through these wounds, Tae Mu-Kang’s Penetrating Energy tried to squirm into her body.

Eun Han-Seol desperately tried to block the Penetrating Energy, but the harder she tried, the more mistakes she made.

Suddenly, her gaze fell upon the place where Jin Mu-Won had been standing, but the young man was nowhere to be seen.

Did he finally run away? Phew, that’s good.

Although Eun Han-Seol thought that, she still couldn’t suppress the tears and the feeling of intense disappointment that followed. She’d thought that their hearts were connected and that he would never betray her.

Eun Han-Seol panicked. It was only now that she realized her true feelings for Jin Mu-Won. It wasn’t just mutual sympathy; she had genuinely fallen in love with him.

She bit her lip. For his sake, she had to keep fighting. The moment she fell, Tae Mu-Kang would go after Jin Mu-Won, Dam Soo-Cheon, and the rest of them. That monster never left any survivors in his wake.

Meanwhile, Tae Mu-Kang was getting irritated. He’d been one-sidedly beating her up for a while, but Eun Han-Seol still hadn’t died.

He leaped towards Eun Han-Seol, his huge body seeming like a massive meteor crashing down upon the small girl.

She held out both of her hands and gathered as much chi as she could within them.

Tae Mu-Kang’s body began to spin like a drill.

The instant Tae Mu-Kang’s spinning drill hit her, she heard the sound of her arms breaking. Now that her defense was shattered, Tae Mu-Kang tackled her right in the chest, sending her flying.

Eun Han-Seol slammed into the ground, coughing. Her face was covered in blood, and the pain was unbearable. aggAnnoy09

If I hadn’t gathered my Silver Soul Chi around my chest at the last minute, I would be dead now.

Still, the impact she had received was too strong. Many of her joints were dislocated, and her ribs were badly fractured. She could only take some comfort in the fact that she was still alive, and crawled to her feet.

“It’s not over yet. I’m still alive. If you want to go after him, you’ll have to do it over my dead body.”

“Are you going to sacrifice yourself for a brat who ran away and left you behind? You’re a fool,” mocked Tae Mu-Kang. aggAnnoy08

“Even so, he is the only person who has ever shown me kindness.”

Tae Mu-Kang roared with laughter, but Eun Han-Seol did not waver. In her eyes, one could see that she was prepared to die fighting.