A raging windstorm tore through the Northern Army Fortress, creating a huge crater that was twenty feet deep and two hundred feet wide smack in the middle of the plaza.

In the center of that crater lay Tae Mu-Kang’s wretched corpse. His head was twisted around to the back, his arms were bent in impossible angles, and his shin bones were sticking out of his flesh.

“Kuheuk!” Dam Soo-Cheon kneeled down on the ground, coughing out blood. He was completely exhausted, and his blood pressure was also absurdly high as a result of forcibly strengthening his chi. So many of his joints had been dislocated that he felt like his body was about to fall to pieces.

“Haa, haa…” When he finally stopped coughing, Dam Soo-Cheon struggled to his feet. Not only had he been severely injured in this battle, he had also used up two-thirds of his chi.

However, he was alive. At the end of the day, the one who survived was always the winner.

Suddenly, Dam Soo-Cheon heard the sound of flowing chi from the direction of Tae Mu-Kang’s corpse. He swiftly turned to face the center of the crater, muttering, “…No way?”

Tae Mu-Kang’s body was twitching awkwardly. His broken bones were slowly healing, and his torn flesh was regenerating. 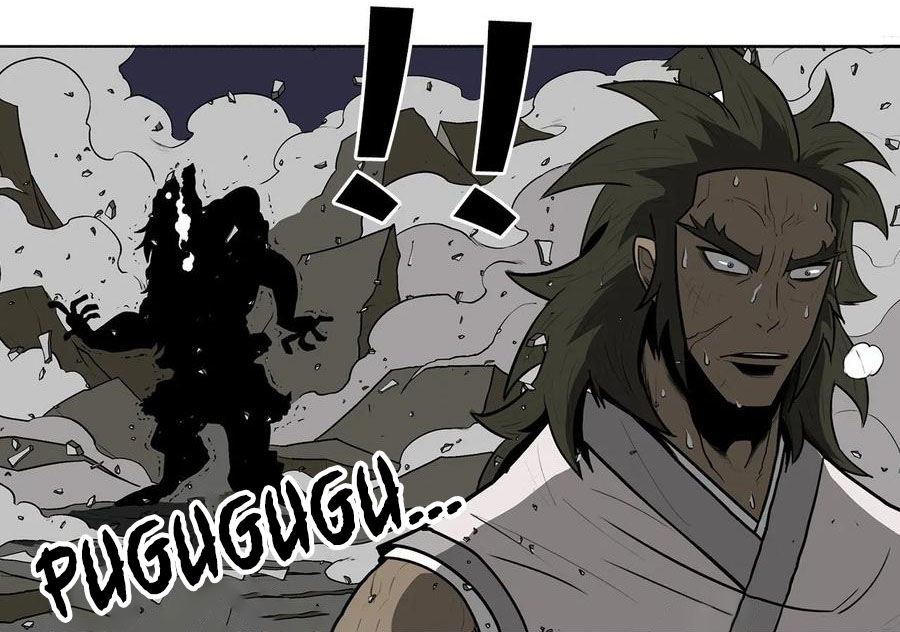 Dam Soo-Cheon’s jaw dropped. He couldn’t believe what he was seeing right now.

I knew it! Eun Han-Seol’s expression froze. She already knew that something like this would happen, because it wasn’t her first time witnessing it.

When his wounds were fully healed, Tae Mu-Kang stood up. Through his hair that fluttered in the wind like raging flames, the light in his bright crimson eyes could be seen flickering back to life.

“Are you…a monster?” asked Dam Soo-Cheon, a grim expression on his face. No matter how strong their martial arts were, no human could recover from that kind of fatal injury.

“But…so what if you’re a monster?” Dam Soo-Cheon pounced on Tae Mu-Kang. It doesn’t matter if he’s human or not. All I have to do is kill him again.

He clenched his fists and unleashed one of the Divine Flash’s most powerful techniques, the “Triple Wheels of Light (三聯光輪擊)1”, aiming to strike the exact same spot on Tae Mu-Kang’s body three times in a row and pierce through his defenses.

His first punch was blocked by Tae Mu-Kang’s murky Rebound Flux. He grit his teeth and stuck a second time.

However, even his second punch was blocked.

“What!?” For the first time, Dam Soo-Cheon’s confidence wavered. All three of his punches had been blocked. It was the first time the Triple Wheels of Light had failed him.

A giant set of footprints appeared on the ground as Tae Mu-Kang abruptly vanished into thin air.

Where is he? Dam Soo-Cheon wondered as he gathered his Light Chi. 2

Just then, he felt a slight vibration to his left and instinctively raised an arm to protect his face.

When Dam Soo-Cheon landed, he quickly hauled himself to his feet and wiped away the blood on his mouth. His intestines felt like they had been rattled, and his heart was thumping furiously in apprehension.

If I hadn’t raised my arm in time, that wouldn’t have ended with just minor internal injuries.

Indignation boiled up from within the depths of Dam Soo-Cheon’s soul. He growled, “How dare you!”

I am the man who will stand at the top of the world.

I am the only person who is allowed to look down on others! How dare he taunt me like this!

Dam Soo-Cheon tried to summon his chi, but…

Something squirmed inside his body. A foreign chi had been injected into him and was invading his bloodstream. It was as if a thousand needles were pricking him all over. Dam Soo-Cheon’s face turned ugly.

Dam Soo-Cheon cycled his chi to drive out the foreign energy.

“Kuwaak!” he gasped, his veins bulging out from his skin. His legs wobbled, and he fell to one knee.

Only now did it finally hit him that the Penetrating Energy Tae Mu-Kang injected into him was not normal.

A spear as black as night hurtled toward him. It pierced through a weakness in the Light Chi he was so proud of, intertwining and interfering with his energy like a virus.

Not even Dam Soo-Cheon himself was aware of this weakness in the Divine Flash. He’d thought that his defense was perfect. However, he didn’t have the time to ponder this weakness, as the dark energy was ravaging his internal organs.

Tae Mu-Kang didn’t wait for him to recover, though, and launched a flurry of attacks at Dam Soo-Cheon.

Dam Soo-Cheon was knocked around the Northern Army Fortress like a dry leaf in a windstorm. He wanted to defend himself, but couldn’t because he had to focus all his concentration on suppressing the foreign chi in his blood.

In an instant, he was covered in wounds from head to toe.

Seo-Moon Hye-Ryung and Shim Won-Ui cried out at the same time, a look of disbelief on their faces. The strongest man they knew had fallen.

In a last-ditch effort to go help Dam Soo-Cheon, Shim Won-Ui desperately pushed the Gray Wolves of Chaos aside and charged at Tae Mu-Kang.

Shim Won-Ui lashed out at Tae Mu-Kang again and again while the giant was distracted by Dam Soo-Cheon, his fingers curled up to form the Demonic Claws of Scarlet Jade (紅玉魔手). 4

Unfortunately, it wasn’t long before his expression became the same as Dam Soo-Cheon’s. Unknown to him, his chi had also been invaded by Tae Mu-Kang’s Permeating Energy.

How is this possible!? My All-Round Chi Technique (**圓端心功)5 is perfect!

Shim Won-Ui’s All-Round Chi Technique was known as one of the most perfect chi cultivation techniques in the gangho. It had been continually refined and improved upon for hundreds of years, and practitioners of it all possessed very stable and balanced chi.

Shim Won-Ui was very proud of his perfectly balanced chi. However, his pride was quickly being shattered into pieces as his chi was thrown into complete disorder by the invasion of Tae Mu-Kang’s energy.

This doesn’t make any sense…

There was something very strange about Tae Mu-Kang’s Permeating Energy. It was as if it knew what Shim Won-Ui’s weakness was all along, and was specifically targeting that weakness.

The Permeating Energy that entered my body has split into tiny needles and is attacking me in many different ways at the same time!

A crack appeared in Shim Won-Ui’s chi, and the Penetrating Energy started breaking down his internal defenses. It had taken advantage of a weakness that Shim Won-Ui didn’t even know existed.

“AHHH!” Shim Won-Ui screamed as he was easily tossed aside. His clothes were torn and bloodied, and his hair was a sticky mess.

Shim Won-Ui trembled. He had never been humiliated like this before.

“GUWAAAA! YOU BASTARDDDD!” he shrieked, hitting the ground with his fists.

Shim Won-Ui would die the instant that kick connected.

Tae Mu-Kang’s leg whizzed past above their heads.

“How did things end up like this…” mumbled Seo-Moon Hye-Ryung. She and Shim Soo-Ah’s faces had paled as they watched the battle. They never imagined that Dam Soo-Cheon and Shim Won-Ui could lose even while working together.

The head of a Gray Wolf that had charged toward Jin Mu-Won exploded. The Gray Wolves of Chaos weren’t a match for Eun Han-Seol at all, and both of her hands were stained with their blood.

Dam Soo-Cheon and Shim Won-Ui were being completely overpowered. It seemed like they could still stand for now, but it wouldn’t be long before they fell.

Eun Han-Seol understood what kind of situation they were in, because she herself had been at the receiving end of Tae Mu-Kang’s special ability before.

Like a dry sponge absorbing water, Tae Mu-Kang’s “Art of the Primeval Hellish Demon (混元閻魔功)6” devoured his opponents’ chi, digested it, analyzed it, and automatically transformed itself into an energy that perfectly countered his opponents’.

It was a bizarre technique that continually evolved itself to counter and oppose every martial art in existence. Because of this property, Tae Mu-Kang was literally invincible.

Even so, the Art of the Primeval Hellish Demon did have one glaring weakness. As Tae Mu-Kang blindingly absorbed his opponents’ chi, the chi in his own body would become impure. When that happened, Tae Mu-Kang would have to hibernate like a bear in winter, or a snake that had just swallowed its meal whole.

An extreme existence like him couldn’t be called human anymore. He was a monster, through and through.

Of course, no martial artist in the world would train themselves to be like that. Tae Mu-Kang was an artificially created monster brought into existence for the sole purpose of hunting down powerful martial artists.

*He even defeated Master. The only way to kill him is to finish him off with the very first attack, before he can absorb and counter our chi. *

Tae Mu-Kang had come to the Northern Army Fortress to hunt down his prey, Eun Han-Seol. While his target was still alive, he would never rest or stop.

Throughout his entire battle with Dam Soo-Cheon and Shim Won-Ui, Tae Mu-Kang had never let his true prey out of his sight. Every once in a while, he’d glance at Eun Han-Seol with murderous intent.