“Ugh…” Noh Ji-Kwang moaned painfully as he rolled around on the ground. He struggled to lift his blood-covered face and look at the person who had done this to him.

A gray giant stepped out from between the ruins of the main gates. Crimson eyes glowing with the light of insanity could be seen peeping out through the tangled mess of his hair.

“Cough!” Blood mixed with chunks of internal organs splattered on the ground. All of Noh Ji-Kwang’s ribs were broken and his heart and lungs were smashed. The giant’s massive blow to the gates had packed enough force to also have fatally injured Noh Ji-Kwang, who was guarding it.

I was going to become a successful man. Why am I dying a dog’s death like this…?

I became Jang Pae-San’s dog and rotted in this godforsaken northern region for three years. I endured all that shit and finally got the chance to return to the Central Plains in glory. I don’t want to die like this! It’s not fair…

Noh Ji-Kwang’s head exploded like an overripe watermelon, sending skull fragments and gray-white brain mush spraying out in every direction.

Tae Mu-Kang looked around the fortress. The countless pavilions and towers were a reminder of the former glory of the Northern Army. However, a reminder was all it was. The buildings were in such disrepair that they could collapse at any moment.

“The Northern Army Fortress is a lot shabbier than I thought it would be.”

The gangho was a place where the strong rule and the weak are eliminated. Losers were even erased from the annals of history, their existences never to be known by future generations. When Tae Mu-Kang looked at it from that perspective, there was nothing pitiful or regretful about the current state of the Northern Army at all.

He marched through the fortress, searching for his prey.

Every step he took reverberated through the ground like the ripples of an earthquake. There was no hesitation or doubt in his large strides, because he was a person who had no reason to hide his presence.

“Where are you hiding, little bitch?”

He had already ordered the Gray Wolves to surround the fortress in order to make sure that the little bitch had nowhere to run. The Third Mercenary Group, which was in charge of guarding the outer perimeter, was completely helpless in front of the strength of the Gray Wolves.

Tae Mu-Kang released his aura and spread it out over the surrounding area. A martial artist of his caliber would usually only be able to spread their senses around two hundred feet away, but his area of detection was several times that of theirs.

Inside the large spider web made up of his aura, he had detected a certain individual’s chi. His target was inside the Lustrous Jade Hall.

The Wardens came running from the Lustrous Jade Hall as soon as they had heard the noise. However, Tae Mu-Kang took no notice of them and continued making his way to the Hall.

“Kukuku! So that’s where you were hiding, little bitch!” he shouted. He had let her get away last time, but her luck could only last for so long.

The Warden Captain Mok Eun-Pyeong stood in front of Tae Mu-Kang, blocking his way. He emitted his killing aura and said, “I asked you who you were.”

Only then did Tae Mu-Kang finally notice Mok Eun-Pyeong’s presence.

The instant he met the intruder’s crimson eyes, Mok Eun-Pyeong felt as if he was being sucked into a whirlpool of insanity. A shiver ran down his spine.

W-What’s up with this man’s eyes…?

He swallowed his saliva in nervousness, but his mouth was dry. The man in front of him was like an undefeatable, gargantuan black bear. His legs were trembling, his blood felt like ice, and his senses were screaming at him to run away. For the very first time in his life, Mok Eun-Pyeong was afraid of battle.

Tae Mu-Kang replied, “An insect like you doesn’t have the right to hear my name.”

Hearing the voice that seemed like it echoed from somewhere deep within a cave, Mok Eun-Pyeong unconsciously took a step backwards.

Suddenly, a sense of shame and guilt washed over him. I am a swordsman. How could I retreat in the face of fear? How shameful.

“Surround him! Do not let him enter the Hall at all costs!”

The Wardens quickly surrounded Tae Mu-Kang, but he ignored them despite their murderous auras. He looked past them and towards the Lustrous Jade Hall, roaring, “Get your ass out of that place right now, little bitch, or I’ll kill every living thing in this place!”

Mixed with the sound of fluttering clothes was the whooshing of black sword chi bursting forth from the Wardens’ blades and striking Tae Mu-Kang like a thunderbolt.

Tae Mu-Kang’s huge body was swallowed up by the sword chi in an instant.

Suddenly, Mok Eun-Pyeong saw Tae Mu-Kang’s grey clothes blow up like a balloon. He quickly realized his mistake though, as a murky gray aura spread out and wrapped itself around Tae Mu-Kang, quickly forming a translucent sphere around his body. 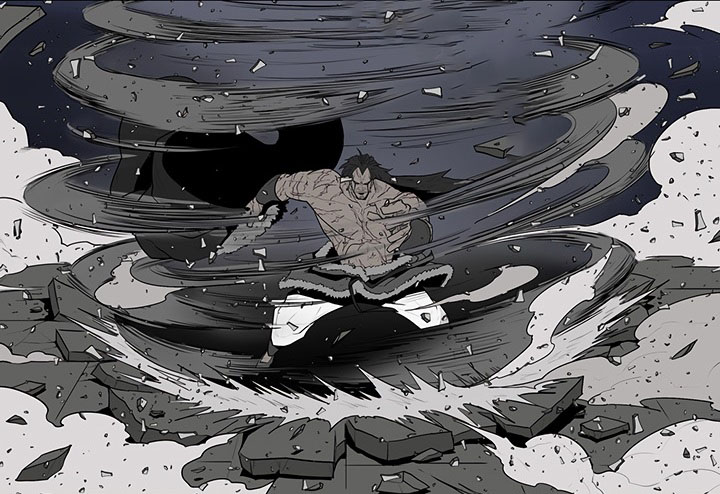 All of the Wardens attacks rebounded off the gray sphere, sending them flying backward in unison. The sword chi that they were so proud of vanished into thin air, and the recoil damaged their internal organs, causing blood to trickle down from their mouths.

“R-Rebound Flux!?” exclaimed Mok Eun-Pyeong incredulously, eyes widening in shock as he wiped away the blood around his mouth.

The gangho was a chaotic place where beginner martial artists often defeated masters. This was a fact that was painfully acknowledged by every experienced warrior. Thus, since one’s level of mastery did not always equate to combat strength, dividing martial arts mastery into levels was meaningless. Mastery meant nothing if a warrior could not use their abilities to the fullest in actual combat.

Nevertheless, there would always be people who liked ranking warriors according to their mastery of martial arts. The classification system that they had come up with was as follows:

According to the people who did the rankings, it was impossible for anyone Peak-level or below to defeat a True Master. That was because Weapon Flux, which includes Sword Flux and Dao Flux, could not be defended against using ordinary weapon chi.

In addition, the chi of a True Master would never run dry, allowing them to surround their bodies with an armor of chi. This chi armor, also known as the “Flux Barrier”, could not be penetrated by weapon chi either.

Therefore, when a True Master faces off against lower-ranked warriors, the combination of Weapon Flux and the Flux Barrier would be the equivalent of having an unstoppable sword and an unbreakable shield.

However, there were several True Masters who did not use their Flux Barriers as simple shields, instead modifying it to reflect their enemies’ attacks back at them with several times more force. Although this technique, known as the “Rebound Flux”, was extremely powerful, controlling it was so difficult that few True Masters could do it unless they had done special training or received some kind of enlightenment.

The move that giant in front of me just used… I’m sure it’s the Rebound Flux. That means that he’s a True Master. We won’t be able to break through his defenses. Even so, I cannot back down!

Mok Eun-Pyeong was aware that his survival prospects were grim. His fellow Wardens had received severe internal damage from the enemy’s Rebound Flux and were still lying on the ground. If he let things continue as is, all of them would die.

He steeled his resolve. He was a proud warrior of the gangho, a place where cowards tended to die quickly, and right now, there was only one path to survival. It didn’t matter whether he stood a chance of winning or not, he had to fight!

That was the fate of one who lived in the gangho, and a fate he had accepted a long time ago.

Mok Eun-Pyeong pointed his sword at Tae Mu-Kang. His valiant spirit was so obvious, even Tae Mu-Kang could feel it.

He gritted his teeth and declared, “I swore to protect this place, and protect it I will. If you want to go past me, you’ll have to do it over my dead body.”

For the first time, Tae Mu-Kang took notice of Mok Eun-Pyeong’s presence. Even he could not fail to acknowledge a warrior with such determination.

“I am the Sword Rain of Blood, Mok Eun-Pyeong!”

“You have a fine name and a commendable resolve. Very well, I will tell you who I am. I am the Chaos Demon, Tae Mu-Kang.”

Tae Mu-Kang approved of Mok Eun-Pyeong’s courage and told him his name. However, those who had lived to tell the tale after hearing his name were few and far between.

Mok Eun-Pyeong charged toward Tae Mu-Kang. He summoned his life’s energy, and unleashed the “Blade of Searing Blood and Soul”. A flurry of swords dyed red with the crimson color of blood fanned out toward the gray giant.

As if it could sense its owner’s desperation, Mok Eun-Pyeong’s sword made a humming sound.

“Oh? Did your sword just cry for you?” Tae Mu-Kang exclaimed in admiration. As long as one’s chi had reached a certain amount, it wasn’t hard to communicate with one’s sword and hear its cry. However, not many people could form such a strong link with their weapon that it cried for them when their lives were on the line.

Since his current opponent was capable of such a thing, Tae Mu-Kang thought that he should at least treat him with the proper amount of respect. He settled on using his signature move, the “Whirlwind Flux of the Chaos Demon (混魔回旋罡)”, and leaped towards Mok Eun-Pyeong.

A bloodied ball of flesh came shooting outwards from within the gray storm. It was the body of the man called Mok Eun-Pyeong.

“Captain!” cried the Wardens as they watched their leader’s corpse crumble into pieces.

Now that he had killed their leader, Tae Mu-Kang had no intention of letting the other Wardens go. He said, “You guys should accompany him.”

Murky gray flux oozed out of Tae Mu-Kang’s body and swooped toward the Wardens.

Despair was written all over the Warden’s faces. Aware that they were unable to dodge, many of them closed their eyes and awaited death.

Suddenly a dark shadow screeched to a halt right in between Tae Mu-Kang and the Wardens.