“I can smell their food from all the way over here.”

“What the heck! Those brats are keeping all the good food to themselves.”

Outside the Northern Army Fortress, two members of the Third Company were complaining while patrolling. Their names were Nam Wol and Lee Chun-Myeong.

Until this morning, they had been feeling pretty good about themselves. They knew that there would be a banquet at the Lustrous Jade Hall and had been anticipating it for days, even starving themselves so that they would be able to stuff themselves on delicious seafood. However, their happy daydreams did not last for very long.

The Warden Captain Mok Eun-Pyeong had ordered the entire Third Company to stand guard around the exterior of the Northern Army Fortress. Jang Pae-San couldn’t disobey his new masters, so he had no choice but to lead them outside and split them into groups.

From these two’s current location, the other groups were not visible. Most importantly, the captain and vice-captain were out of sight, out of hearing, and therefore out of mind. Without their superiors around to nag at them, the two men, as well as most of the others, had relaxed their vigilance and started gossiping and complaining instead.

“What kind of danger could there possibly be in this desolate place? Compared to meaninglessly patrolling, I’d much rather be practicing martial arts.”

“Yeah, me too. Our time would be much better spent learning the Blade of Blood Waves.”

Nam Wol and Lee Chun-Myeong were addicted to practicing the Blade of Blood Waves that they had received from Jang Pae-San. It was their first time encountering a martial art that could be used to reach Transcendence, and it had rekindled their dreams of becoming stronger.

“I’m so goddamned hungry. Hey, how long do you think we will have to keep patrolling before they call us back?”

“I wonder if there will be leftovers from the banquet. I saw the amount of food that the servants prepared before leaving the fortress, and it was enough to feed an army.”

“Fuck! Just thinking about it is making me salivate. Ahh, I can’t stand this any longer! Want a drink?” asked Lee Chun-Myeong, taking out a bottle that had been hanging at his waist.

Nam Wol stared at the bottle for a while. Then, suddenly, his face paled. He exclaimed, “That’s a bottle of wine, isn’t it? Where did you get that?”

“Heehee! I bribed a servant into swiping it for me.”

“Aren’t you worried about getting caught?”

“Don’t worry, those guys have got so much wine, they won’t even notice that one bottle has gone missing! So, you drinking or not? If not, the whole bottle is mine.”

“Oi! Who would say no to wine? Still, this place is too open. We should find somewhere we can hide and drink without worrying about our backs,” said Nam Wol, looking around desperately.

Lee Chun-Myeong laughed, “It should be fine if we leave our posts for a while, right?” He pointed toward a nearby bush.

Nam Wol grinned, revealing teeth as yellowed as Lee Chun-Myeong’s. He said, “Then, shall we begin our own little banquet?”

The two men exchanged looks, then headed for a spot behind the bushes.

“Kuhaa! This is great wine!”

After taking a sip, Lee Chun-Myeong revealed an expression of utter bliss, then passed the bottle to Nam Wol.

“Phew! This must be some kind of expensive wine!” exclaimed Nam Wol, wiping his mouth with his sleeve.

The wine that Lee Chun-Myeong had procured was not ordinary cheap wine, but premium aged Shaoxing wine that was only produced in Shaoxing, Zhejiang Province, and was widely considered one of the finest wines in the Central Plains.

After such a high-quality wine, Lee Chun-Myeong and Nam Wol started feeling like the world was at their fingertips. They reveled in the euphoria that came with their drunkenness.

Their foolish laughter rang out across the northern plains, “”Hahahahaha!””

“We only need to put up with this shit for a while longer.”

“Hey, after we go back to the Central Plains, let’s spend ten days and nights in a brothel.”

“Heeheehee!” Just the thought of visiting a brothel made the two men burst into laughter once again.

Just then, they heard a hollow, sinister voice saying, “Can I have some of that wine too?”

Startled, the two men quickly stood up and looked behind them. A giant wearing tattered gray clothes was standing there, staring at them with an insane look in his glowing, red eyes. As their eyes met with his, the two men froze.

The giant held out a hand, and Lee Chun-Myeong unconsciously handed over the bottle of wine like he was possessed by a ghost.

The giant quickly downed the wine. He then wiped his lips with a torn sleeve and smiled, saying, “At least the wine is pretty good.”

When Lee Chun-Myeong and Nam Wol saw the giant’s creepy smile, they immediately pissed their pants, trembling uncontrollably with fear.

That came as no surprise to the giant, as living beings tended to lose control of their bladders when faced with a life-threatening situation. It seemed that these two were no exception.

“What’s up, Hyung-nim?” asked Yoo Gyung-Chun, puzzled. However, Seo Mu-Sang did not reply.

I don’t know why, but I have a bad feeling that something terrible has happened. My nerves are all standing on end, and my skin is covered with goosebumps.

Only then did Seo Mu-Sang turn towards him, saying, “Something’s wrong.”

“What on earth are you talking about?”

Instead of answering, Seo Mu-Sang frowned. His heart was pounding, and he couldn’t calm down. He had never felt like this before.

He stood up abruptly. Noticing this, Won Jeok-Sim approached him.

“Call the other guys.”

“Eh, are you for real…” complained Won Jeok-Sim.

Seo Mu-Sang was just about to answer him when the sound of a horn rang out across the northern plains. This was the signal to report. All of the groups blew their horns in response, except for the one in the northwest area.

“Who is in charge of patrolling the northwest area?” asked Seo Mu-Sang.

“I think its Chun-Myeong and Nam Wol. I saw Chun-Myeong snatch a bottle of wine, so maybe those two got drunk? Anyway, don’t worry too much about it. Just what could possibly go wrong?”

“No, I think it’s something more serious than that.”

Seo Mu-Sang felt strangely anxious, like something ominous was weighing heavily upon his heart. He drew the rusty iron sword at his waist. His steel sword had been broken during the fight with Yeop Wol, and he hadn’t been able to find a proper replacement, so he figured he’d just make do with a random cheap iron sword until he could get a new one.

“Hyung-nim?” Won Jeok-Sim’s face twitched. Whenever Seo Mu-Sang got like this, no one could stop him, not even their captain, Jang Pae-San.

Suddenly, Seo Mu-Sang started running northwest. Won Jeok-Sim was left with no choice but to chase after him while complaining, “Da fuck? Ahh, why am I friends with you of all people…”

Seo Mu-Sang sprinted with all his might. Every time his foot touched the ground, he would leap twenty feet forward. He quickly raced far ahead of Won Jeok-Sim and vanished into the distance.

Won Jeok-Sim’s jaw dropped. He yelled, “Hey!? What the hell? Since when have you been that good at martial arts?”

Won Jeok-Sim could hardly believe his eyes. Seo Mu-Sang was the only member of the Third Company who hadn’t learned the Blade of Blood Waves, and yet he was so much faster than himself. This makes absolutely no sense!

In order to try to keep up with Seo Mu-Sang, Won Jeok-Sim squeezed out every last bit of energy, expending both his chi and physical strength in the process. After some time, he finally caught sight of Seo Mu-Sang.

Furious, he shouted, “Oi! What was the meaning of that!? Why’d you suddenly run off?”

Just then, Won Jeok-Sim finally noticed the odd expression on Seo Mu-Sang’s face. He turned to face the direction where his friend’s gaze was transfixed. 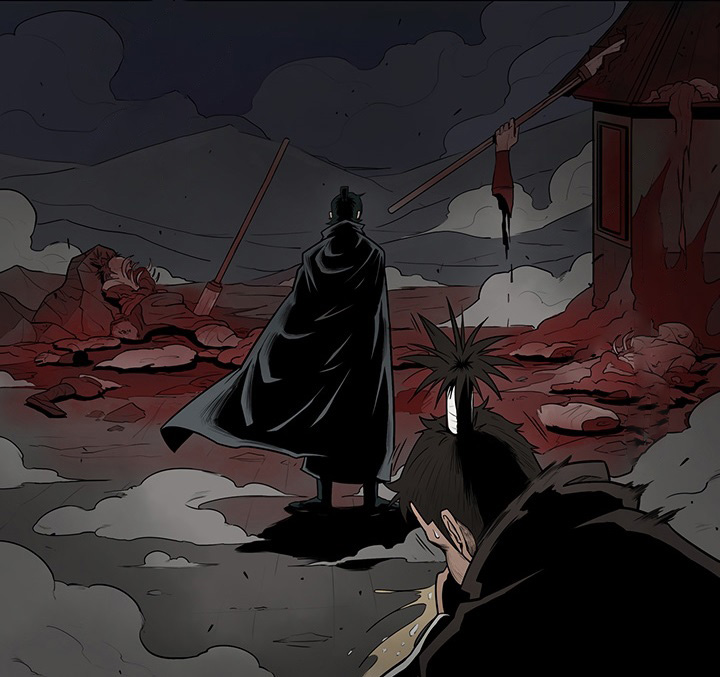 His eyes widened in shock at the sight, so much so that his eyeballs looked like they were about to pop out of their sockets.

His shock quickly turned into rage.

Won Jeok-Sim looked away, trying to erase the revolting sight from his mind. He felt that it would leave a permanent scar in his heart if he didn’t forget what he had seen.

The remains of Lee Chun-Myeong and Nam Wol lay in front of the two men. Their corpses had been inhumanely dismembered and scattered across the ground like pork and beef that had been cut up by a butcher. The only proof that these lumps of meat were once human was the appearance of a few distinctive body parts.

“It seems…that we’ve got an intruder.”

A crazy psychopath of an intruder that is more ferocious than a bear, and more ruthless than a tiger. No mentally sound person could have been this savage.

Seo Mu-Sang turned around to face the Northern Army Fortress. According to the tracks, it went that way. That murderous psycho went into the fortress!

“You need to inform the others about this. I will go after him.”