In the backyard of the Northern Army Fortress, there was a man frantically swinging his sword. It was Seo Mu-Sang.

Seo Mu-Sang’s wounds, which had scabbed over, reopened as he moved around vigorously, spilling blood all over the place. However, he ignored it and continued swinging his sword as if he couldn’t feel any pain.

A whirlwind was stirred up by the force of his blade, wrecking everything in its path.

It’s a lie. It must be a lie, thought Seo Mu-Sang with bloodshot eyes.

Yeop Wol’s last line repeated itself over and over in his head, torturing him day and night. The only thing Seo Mu-Sang could do to vent out his fury was swing his sword with everything he had.

His body was trembling uncontrollably and his blood vessels felt like they were going to burst open, but Seo Mu-Sang still did not stop. If he didn’t vent out all his frustrations right now, he would go crazy.

Yeop Wol was indeed talented in martial arts, but Seo Mu-Sang didn’t think that he was the least bit inferior to Yeop Wol.

If I had learned the same martial arts as him, and been given the same opportunities, I would never lose to him.

The chi emitting from the broken sword slowly dimmed. If he insisted on continuing, there was a possibility that his chi center would be damaged, killing him. Even so, he did not stop.

That was because, as a result of his battle with Yeop Wol, he was being constantly tormented by his inner demons. 1

Kill! I should just kill them both!

An enormous killing intent gushed forth from his entire body.

As long as I can kill Yeop Wol, it doesn’t matter if I die. That woman who betrayed me needs to die, too.

Just as he was about to stomp out of the backyard and seek out Yeop Wol, he heard a gentle voice saying, “Paranoia gives birth to delusions (疑心生暗鬼)2. When you are paranoid, your unjustified fears become food for the darkness within your heart. Lashing out in anger will only result in your own destruction, and even then, none of your problems would be solved. Your fear and rage are but one facet of you, they do not define who you are. Calm your heart, and it will become a mirror that reflects your true self.”

Seo Mu-Sang’s footsteps came to a screeching halt. Ripples appeared inside his heart that had been consumed by an ocean of darkness. Slowly, light began to return to his glazed eyes.

The mysterious voice continued, “Even when a stream has flowed to its lowest point, sunlight will cause the water to evaporate and rise to the heavens. The same is true for the heart. When the calm wind blows, the clouds of your worries will scatter into nothingness.”

Seo Mu-Sang shivered. How long have I waited just to hear these words?

To some, these words were no more meaningful than noise. However, to Seo Mu-Sang, they were like a desert oasis, enlightening him to the fundamental truth behind the Blue Cloud Sword Style and guiding his swordsmanship to new heights.

Seo Mu-Sang immersed himself in the words of the stranger. Bit by bit, his rampaging chi settled and returned to his chi center.

“Liken your body to a tree. Let your chi be the water, your Spirit Palace (神闕) the roots, your Upper Pillar (天柱) the trunk, and your Hundred Meetings (百會) the branches and leaves.” 3

Seo Mu-Sang did as the voice instructed him to.

The blocked blood vessels in his body opened up one after another as his chi flowed through like a raging torrent. However, unlike before, Seo Mu-Sang’s expression was unbelievably calm and composed. He closed his eyes and focused on channeling his chi.

The chi that had never budged no matter how much he practiced the Blue Cloud Meditation Technique was now charging forward like a warhorse without reins. It barged its way through narrow and blocked channels, creating new and wider paths for his chi.

I can’t believe it took me this long to realize it.

After mastering the Blue Cloud Sword Style and the Blue Cloud Meditation Technique, I thought that I had reached the peak of these martial arts, because I could no longer see a path forward. But right now, all that has changed. This mysterious voice has shown me the best way to keep climbing higher toward the heavens!

Seo Mu-Sang kept circulating his chi, until eventually it began to accumulate, like tributaries merging into a wide river. When he completed three cycles of circulation, he opened his eyes.

For an instant, his eyes seemed to glow with a blinding light, but they returned to normal so quickly that it was completely imperceptible.

Seo Mu-Sang swung his broken sword again. Unlike the last time, though, he was not waving his sword blindly. He moved along with the flow of chi.

A layer of sword chi enveloped the broken blade, but Seo Mu-Sang did not notice it. He had entered a trance as he swung his sword repeatedly. 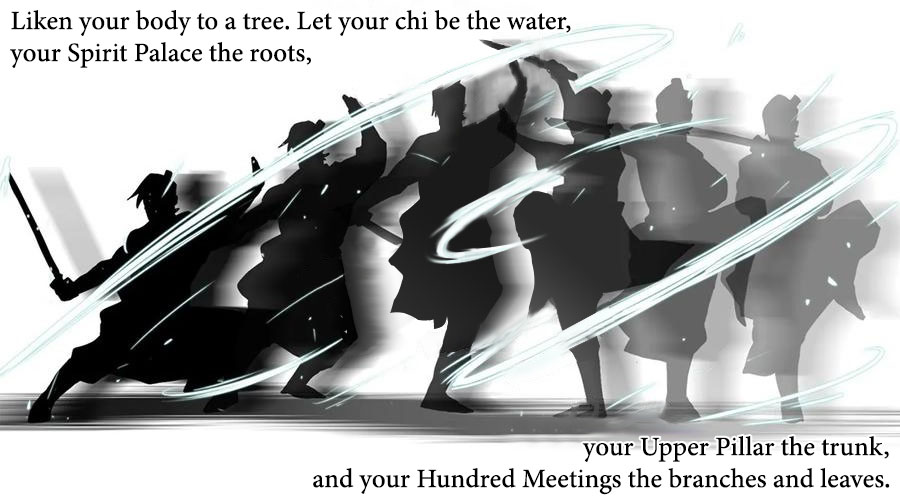 Hours passed, until at last the sun began to rise, signaling the break of day. It was only then that Seo Mu-Sang stopped swinging his sword to take a breather.

He could sense a powerful chi like molten metal flowing through his body. It was exhilarating. He had never felt like this before.

Suddenly, a question popped into his mind. Just who is the owner of the mysterious voice?

He looked up and surveyed his surroundings, but there was no one around him. Whoever had helped him was long gone.

“Hello? Is there anyone there?”

The mysterious voice had sounded both familiar and unfamiliar at the same time. Seo Mu-Sang thought hard about it for a long time, trying to remember if there was anyone around him with a voice like that.

Inside the smithy, Jin Mu-Won was sitting on a chair with his eyes closed. He had made this chair himself, and although it was very simple, it was also very comfortable as it was perfectly sized for him.

Just like this chair, the sword I want must not be too long or too short, too heavy or too light. It should be just right for me.

Every day without fail, he would do swordsmanship training in the basement of the Tower of Shadows, and then make a new sword in the smithy. His hands were now covered in calluses, and his knuckle joints were thick like the nodes of bamboo plants. As a result of all the training and smithing, he now had hands that were suited to wielding a blade.

It was the same for the rest of his body. As he practiced his swordsmanship, his muscles would adapt themselves to his movements. The changes to his body weren’t immediately obvious under his clothing, but anyone who paid close attention to him would have noticed that he now possessed an athletic build.

In order to create a body that was suited to swordsmanship, Jin Mu-Won had trained his muscles and roughened his hands in a very specific way, one step at a time.

Just like the hammering of a piece of steel into a sword, he was polishing himself for the future. This was a time-consuming, boring, and punishing task. In addition, in order to avoid attracting the attention of Heaven’s Summit, he had to slow down his training speed on purpose.

Since he was still growing, making a sword for himself was a waste of his time. He needed to wait until he was fully grown to make the perfect blade. Even so, he had to keep practicing swordsmithing in preparation for the future.

“This is a battle of patience, after all.”

I have to remain patient until the precise moment for me to strike back arrives. Before that, I need to do everything I can to prepare myself for that moment. I have to polish my mind, body, and skills to perfection. Waiting is the only thing I can do right now, and I just happen to be very good at it.

Now that he had organized his thoughts, Jin Mu-Won opened his eyes. He stood up and walked to a corner of the smithy. There, on the ground, lay a huge pile of broken swords. He did not have enough raw steel ore to work with, so he had to recycle the old steel from the broken swords as many times as he could. He thus picked up several metal shards and tossed them into the furnace.

The flames turned blue and his skin prickled as the temperature inside the furnace rose. Previously, whenever he did this, Jin Mu-Won had felt like his lungs were on fire and would consequently lose his appetite.

However, at some point, he had unintentionally figured out how to breathe through his skin. It was a skill that he had learned naturally as he got used to the scorching heat.

He suspected that this skin-breathing technique had something to do the Art of Ten Thousand Shadows. It was probably one of the as-yet unknown abilities that one would obtain after practicing the martial art. The Art had been devised by the combined efforts of the past Lords of the Northern Army, but even they knew very little about the side effects of practicing it.

Jin Mu-Won was basically a pioneer who was feeling his way through a pitch-black maze without a single lamp. Even so, as long as he kept moving forward and never gave up, he believed that he would be able to find his way out of the maze into a bright new world one day.

He took out the lump of steel that had formed from the broken sword shards out of the furnace. It had reached the correct temperature for forging. He then began hammering the metal, sending sparks flying everywhere as the steel was shaped.

The sound of Jin Mu-Won’s hammering was pleasantly rhythmic, like music. He immersed himself within the rhythm and eventually lost track of time. How long have I been doing this?

Suddenly, his concentration was interrupted by a sudden remark, “Wow! I never knew that the sound of hammering could be this refreshing. It’s making quite the impact on me too!”