Jin Mu-Won’s jaw dropped as he gaped at the newly renovated, brand new interior of the Lofty Sky Manor. After the fall of the Northern Army, this place had been completely abandoned. Most of the building had collapsed, sealing off access to the interior.

He hadn’t observed them in person, but he could tell that Jang Pae-San and his lackeys had worked extremely hard on the renovation. 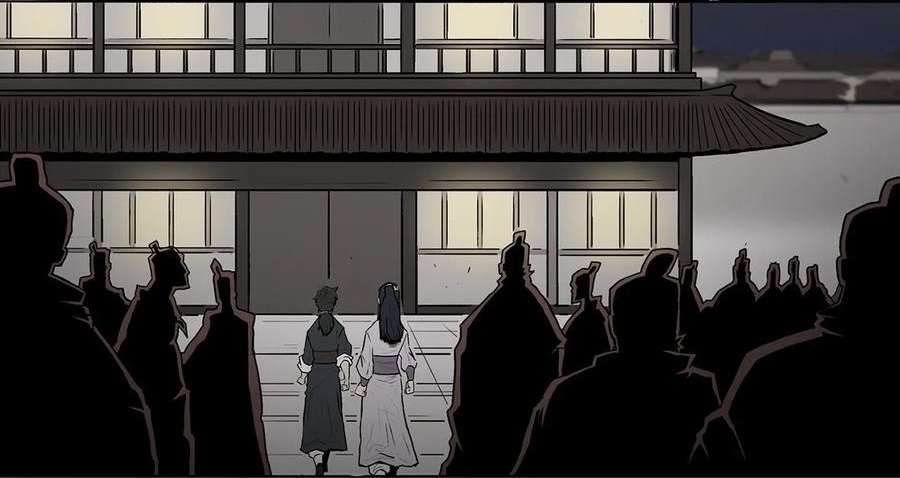 As Jin Mu-Won and Eun Han-Seol entered the manor, they were greeted by a man who appeared to be a servant.

“Am I correct in assuming that you are Lord Jin?”

“The banquet is on the third floor. Please follow me.”

The servant led them up the stairs.

These guys actually brought their servants along with them on such a long, arduous journey?

Besides the guard, Jin Mu-Won saw more than a dozen people dressed like servants busy cleaning and decorating the manor.

It’s as if they seriously think that the Lofty Sky Manor belongs to them. It’s obvious that these people don’t plan to stay here for just a day or two.

Those people wouldn’t have brought so many servants along with them if they were only planning to stay at the Northern Army Fortress for a few days. He did not know their reasons for doing this, but the one thing he could be absolutely sure of was that these people were going to stay for quite some time.

“Young Master, I have brought the guests.”

Only after the servant had obtained his master’s permission did he open the door, saying, “Please enter. The Young Master and his companions are waiting for you.”

The room where the banquet was being held had been decorated in an ostentatious manner. A massive tiger fur carpet was laid out on the floor, and all sorts of weapons had been hung up on the walls. Colorful ceramics that were nonexistent in the rest of the Northern Army Fortress were displayed everywhere in this room, adding to its grandeur.

All these things were probably brought here by Judgement Heaven.

A young man and two young women were sitting around the table in the center of the room. It was Shim Won-Ui, his younger sister Shim Soo-Ah, and Seo-Moon Hye-Ryung. All sorts of seafood dishes were laid out on the table, many of which Jin Mu-Won had never seen the likes of before.

As the two of them entered the room, Shim Won-Ui stood up.

“Come sit down. My name is Shim Won-Ui,” he greeted Jin Mu-Won, looking at him sullenly.

Next to him, Seo-Moon Hye-Ryung frowned but did not say anything.

Jin Mu-Won moved to the head of the table and said, “I am Jin Mu-Won.”

“And the young lady beside you is?”

“A distant relative that I’ve been taking care of.”

Even while Jin Mu-Won was introducing her, Eun Han-Seol did not express any interest in anything other than the food on the table. Shim Won-Ui furrowed his brows. He hadn’t expected Jin Mu-Won to bring anyone. Even so, he controlled his temper and tried to sound patient, saying, “This is my younger sister Shim Soo-Ah, and this is Seo-Moon Hye-Ryung.”

“You people are from Judgment Heaven and the Seo-Moon Clan, right?”

“I’ve heard your names before. Aren’t you guys famous?”

Shim Won-Ui looked at Jin Mu-Won thoughtfully, but Jin Mu-Won ignored him and sat down nonchalantly.

“I haven’t attended such a formal banquet in a very long time.”

“You must be hungry. I’ve prepared a lot of food, so, please do savor it.”

“Isn’t it difficult to prepare so much food?”

“Not at all. Wherever I go, the servants will prepare food for me that suits my personal preferences.”

“I envy you. I have to cook for myself every day.”

“If you wish, I can give you one or two servants.”

“Thank you for your offer, but as you know, I can’t afford to hire anyone. Life is hard for the only survivor of a ruined family, after all.”

Seo-Moon Hye-Ryung’s eyes lit up. Jin Mu-Won’s behavior was quite different from what she expected.

She had thought that Jin Mu-Won would be shocked or upset by their presence. Ultimately, the truth was that they were intruders who were forcefully staying in a fortress that belonged to Jin Mu-Won.

Most importantly, they were members of Heaven’s Summit, the ones that had forced Jin Mu-Won’s father to commit suicide and the ones who caused the dissolution of the Northern Army.

Seo-Moon Hye-Ryung’s grandfather had even been the central figure behind that incident. Although there was no way Jin Mu-Won wouldn’t know about this fact, he did not openly express any anger or hostility and appeared quite apathetic.

Shim Soo-Ah looked at Jin Mu-Won and Eun Han-Seol curiously, then abruptly asked, “Jin-orabeoni, have you been living alone for the past three years? Do you ever feel lonely? Where did you get your food from?”

Shim Won-Ui, who had sat down next to Jin Mu-Won, was so shocked by his sister’s slew of rude questions that he failed to stop her in time. However, Jin Mu-Won answered her patiently, “Um, I somehow managed to survive living alone, and an acquaintance sends me food regularly.”

“Is Orabeoni going to continue living here? If I had to stay here all alone, I don’t think I would even last a month.”

“No matter what, this is my home. There is nowhere else for me to go,” replied Jin Mu-Won, shrugging.

This time, it was Seo-Moon Hye-Ryung’s turn to ask questions. She said, “Mister Jin, have you never thought about going to the Central Plains?”

“Is there anyone in the Central Plains who would welcome my presence there?”

“I’ll probably be better off staying far away from those people.”

“Is that so? Mister Jin seems like a very lonely person to me.”

Seo-Moon Hye-Ryung’s jet-black eyes shimmered with sadness and sympathy. She looked so alluring at that moment that even Jin Mu-Won couldn’t help but sink into deep thought, wondering how much of that was real.

Shim Won-Ui observed Jin Mu-Won, who had slumped down in his chair as if captivated by Seo-Moon Hye-Ryung.

He’s still a child. Even so, his youth is no reason to underestimate a tiger cub like him.

Just then, Eun Han-Seol complained, “Can we start eating now?”

As if her voice was an alarm bell, Jin Mu-Won suddenly woke up from his stupor. He raised his head and saw a pouting Eun Han-Seol staring at the food.

“Haha! My mistake, I nearly forgot that we had another guest. We can keep talking even while eating anyway.”

The banquet commenced. Both Jin Mu-Won and Eun Han-Seol vigorously moved their chopsticks as they snatched up the food. Whenever one dish was almost empty, several servants would appear carrying refills as if they had already prepared more beforehand.

“Wow! This dongpo pork1 sauce is perfect. The meat is cooked very well too. This chef’s skills are amazing!”

“The one who made this is my personal chef. When it comes to braised meat, he is one of the best in the Central Plains.”

“He’s probably the best one of them all!” Jin Mu-Won gave Shim Won-Ui the thumbs-up.

“How about another drink?”

Jin Mu-Won drank all the wine that Shim Won-Ui offered him. As a result, he was so drunk, his face had turned red and his eyes were bloodshot.

Some time later, when they were done eating, Shim Won-Ui wiped his lips clean with a handkerchief, then said, “How did you find today’s meal?”

“Thanks to you, I got to enjoy a luxurious meal. If possible, I’d like to be invited over to dinner more often.”

“Then I suppose I’ll have to thank you in advance.”

“It’s only fair since I have a request for you as well. You are the owner, and I am simply a guest, so I would like to seek your approval to let us stay here for some time.”

“It seems that you plan on staying for quite a while.”

“I am waiting for my friend here.”

Shim Won-Ui smiled for the first time. Jin Mu-Won felt that his smile was like that of a beast looking at its prey.

Seo-Moon Hye-Ryung asked, “Have you heard of the name ‘Dam Soo-Cheon’ before?”

“You mean, the guy who took on the Hundred Man Challenge?”

“Why did you suddenly bring him up?”

A hint of suspicion appeared on Jin Mu-Won’s face. He couldn’t understand why she had suddenly mentioned Dam Soo-Cheon. Suddenly, a thought sprang into his mind.

“Could it be, the person you’re waiting for is Dam Soo-Cheon? Why would he come here?”

“The location for the final duel of his Hundred Man Challenge is not far from here. He probably wishes to see the traces of the former Northern Army’s glory for himself. Regardless of what anyone says, it is an indisputable fact that the history of the Northern Army’s hundred-year war with the Silent Night is buried within these walls.”

“Then, until he arrives, we will be imposing on you.”

“Don’t worry, there are lots of empty rooms here anyway.”

“I think I’ll be heading off to bed now. I’ve had too much to drink, and I’m worried that I’ll do something stupid if I get drunk.”

“Alright. Until next time, then.”

Jin Mu-Won stood up shakily and drunkenly patted Shim Won-Ui on the back. He grabbed Eun Han-Seol, who still wanted to eat more food, and dragged her out of the banquet room.

Seo-Moon Hye-Ryung watched him as he left.

Shim Won-Ui asked, “Well, what do you think?”

“He seems to be a very levelheaded person.”

Suddenly, Shim Soo-Ah, who had been quiet for some time, spoke up.

Shim Won-Ui’s jaw dropped as if he couldn’t believe what he had just heard, but Shim Soo-Ah ignored him and placed a hand on her chin as she looked longingly at the door Jin Mu-Won had just walked out from.

“He’s good-looking, and he has a very unique aura. I think I might have fallen in love with him.”

Shim Soo-Ah looked at her brother, grinning. Shim Won-Ui chose not to meet his sister’s eyes and called for Mok Eun-Pyeong instead.

“Send some men to keep an eye on him.”

“Get me information on the girl next to him as well.”

When Mok Eun-Pyeong had left, Seo-Moon Hye-Ryung said, “Was that really necessary?”

“You’ll know once you see the end result.”

Shim Won-Ui poured himself a cup of wine. In his eyes, a cold light that would send shivers down anyone’s spine glinted.