One day, the sound of metal being hammered could be heard resounding from within the Tower of Shadows. The sound traveled outside of the tower and echoed off the walls of the fortress before falling into silence.

On the fourth floor of the tower, in a completely enclosed room, Jin Mu-Won was swinging a hammer. The sweat on his bared upper body glistened, illuminated by a furnace in the corner of the room.

With his other hand, he held a red-hot steel bar in place using a pair of metal tongs. Every time he swung the hammer down, the length of the bar would increase a little.

Jin Mu-Won hammered away at the steel bar until the heat had dissipated, then put it back into the furnace. When it turned red, he would take it out and resume hammering it.

Sparks flew all over the place with his every strike, and the clang of metal hitting metal echoed off the walls. Jin Mu-Won ignored these and quietly hammered the metal over and over again. His goal was to make a sword.

The sword would be two cheok seven chon1 long and slightly curved, similar to the wooden sword that he had carved before.

Jin Mu-Won could have requested Hwang Cheol buy a sword for him, but he chose not to. He wanted to increase his understanding of swords by smithing them himself.

He did not think that swords were only weapons for killing. A sword was a martial artist’s best friend, one that would sync perfectly with the wielder’s breath, just like an extra limb. He felt that if he did not make the sword himself, he would be unable to understand the sword’s true nature, so he decided to start learning swordsmithing.

Jin Mu-Won had come up with this idea because of what he read in a book titled, “Record of a Thousand Weapons”. It was an autobiography written by Im Yeon-Su, the best blacksmith of his time more than a hundred years ago. He recorded everything he had accomplished during his lifetime in the book. Hwang Cheol had obtained this book by coincidence and had given it to Jin Mu-Won.

The Record of a Thousand Weapons described in detail the methods of refining steel as well as the process of smithing different weapons. According to Im Yeon-Su, the best weapons chose their own master, but the finest weapons of all were crafted by their own master.

Luckily for Jin Mu-Won, there was an abandoned smithy in the Northern Army Fortress. It was the place where weapons were crafted and repaired during the Northern Army’s heyday, but now there were only furnaces left.

He dismantled one furnace and moved it into the Tower of Shadows. When Jang Pae-San noticed his movements, he shot Jin Mu-Won a suspicious look.

“Kid, what’s the meaning of this?”

“I can’t keep taking money from Uncle Hwang forever, so I was thinking of preparing for the future.”

“I want to be independent. That’s why, from now on, I will be learning blacksmithing to earn a living.”

Jin Mu-Won’s excuse did not ease Jang Pae-San’s suspicion. However, he couldn’t think of a reason to stop the young man as blacksmithing was not the same as martial arts.

In fact, just the notion of it was ridiculous.

The heir of the Northern Army wants to make a living off blacksmithing. Hahahahaha!

Jang Pae-San decided that he should just sit back, relax, and watch as the legend sank to new lows.

Now that Jang Pae-San’s suspicions had been cleared, other problems began to crop up.

Hwang Cheol had already given him the most important material, the steel ingots. However, there was no fuel for the furnace. Jin Mu-Won had to find a way to obtain fuel himself. He left the fortress carrying a rake and an axe, cutting down oak and pine trees for wood. He then made charcoal from the wood.

Jang Pae-San and his cronies laughed when they saw Jin Mu-Won hard at work, but the young man ignored them and quietly went about his tasks.

The first things he made were tools like hammers and tongs. Only then did he begin to get serious about smithing. Using the two different types of charcoal made from different woods, he controlled the temperature of the furnace. He then heated the ingots and hammered them. Although Jin Mu-Won had already memorized the contents of the Record of a Thousand Weapons, reading about something was not the same as actually doing it.

For the first time in his life, he severely injured himself while hammering. He also experienced what it was like to be burned by molten metal. His hands hurt so much from hammering that for the first few days, he couldn’t even hold a pair of chopsticks. Still, Jin Mu-Won did not give up.

He knew that his greatest strengths were his resilience and determination. He might be moving forward at a snail’s pace, but as long as he never gave up, he would eventually travel a thousand miles to the pinnacle of excellence.

He hammered again and again and by the time he learned how to hammer properly, there were callouses on his hands. It was only then that he could finally mold a piece of metal into the desired shape successfully. However, only the shape was correct. His work was still far inferior to a true craftsman.

Jin Mu-Won observed the sword he had made closely. Because he hadn’t quenched the steel correctly, unsightly marks had been left behind on the surface of the sword. The thickness and width of the sword were also so uneven that he felt bad even calling it a sword.

He picked up a nearby hammer and continued hammering away at the sword.

The sword that he had spent so much effort making suddenly snapped in half. He tossed the broken sword aside without hesitation.

“Hew…” sighed Jin Mu-Won, sitting down on a nearby chair.

His efforts for the last few days had all been for nothing. Naturally, he was dejected.

From the beginning, he hadn’t expected to make a decent weapon. However, his progress was much slower than he’d thought it would be. He felt that his pride had been injured.

I thought that I was quite dexterous, so I believed that as long as I put in the effort, I could master smithing very quickly.

Jin Mu-Won looked at his hands. They were covered in ugly blisters and callouses. The heat had caused his skin to peel off, and several parts were badly burnt. Even so, he felt that he had gained something from the experience.

It’s slow, but I’ve definitely improved. Jin Mu-Won, you need to keep doing your best, he told himself.

He stood up from the chair.

He climbed up the steps of the Tower of Shadows and went to his quarters on the highest floor. Although he was exhausted, he did not rest. Instead, he started to cook.

When the rice was ready and the mutton was almost done, the door to the room opened and someone came in. It was Eun Han-Seol, who had entered the room like it was only natural. She sat down without a word and Jin Mu-Won automatically handed her a bowl of rice and a spoon.

“Why is it mutton again?”

“Er, we have other types of food as well…”

“I know that mutton is a luxury food.”

“I’m just sick of eating it all the time.” 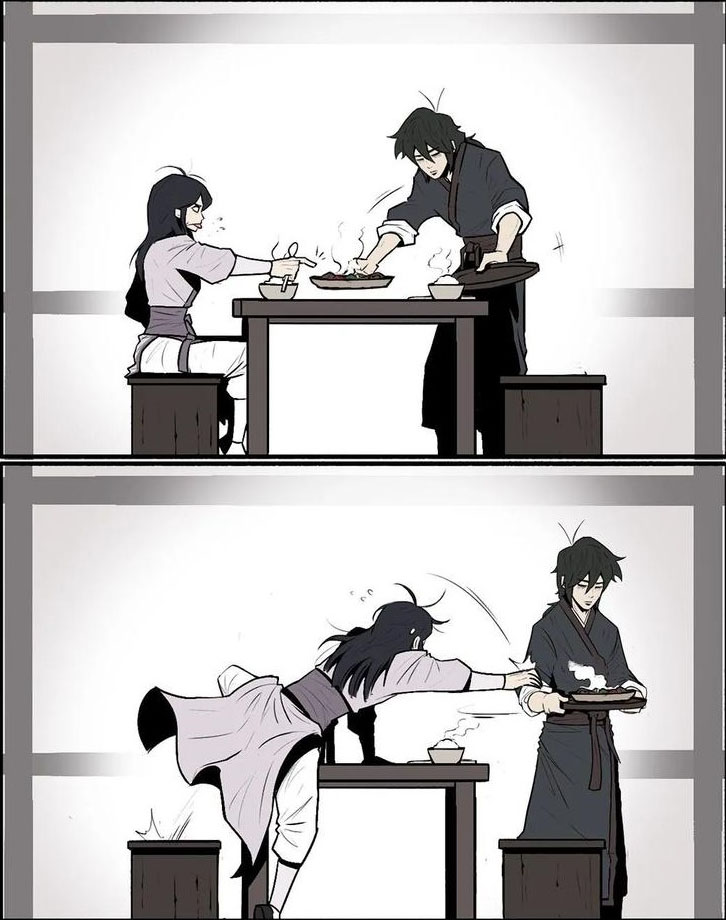 “There’s nothing I can do about that. Spring is almost here, though. If you can wait a while, I’ll make lots of even tastier dishes for you.”

For the last three months, Eun Han-Seol had shown up in his room every day during mealtimes. It was as if he had promised to keep feeding her. Jin Mu-Won did not say anything about her behavior, only cooked for her every time she came. Now that this had become a familiar scene, he felt that they had become much closer.

Still, he knew that there was an insurmountable wall between the two of them. For all this time, Eun Han-Seol had never said anything about herself, and neither had Jin Mu-Won asked her about it.

This odd relationship had already continued for three whole months. They had gotten used to seeing each other every day.

Jin Mu-Won stared at Eun Han-Seol as he ate. She was eating a lot better now, and looked a lot healthier than before too. The amount of meat that she consumed every day had left a strong impression on him.

“I am so sick and tired of eating mutton stew.”

Winter was almost over now. When spring came, Hwang Cheol would visit the fortress, bringing with him enough stuff to fill the storeroom to the brim. I’ll be able to cook much nicer dishes for her soon. If she’s still here, that is.

Jin Mu-Won did not think that Eun Han-Seol would be staying at the fortress for much longer. She wasn’t suited to living in this desolate place.

The longer someone lived in a certain place, the more they would blend into their surroundings. However, Eun Han-Seol was an exception. She refused to blend in. This meant that she was ready to leave at any time.

“Are you still making swords?”

Jin Mu-Won didn’t hesitate to tell Eun Han-Seol the truth. Strangely, every time he saw her, he would feel extremely relaxed, even telling her secrets that he wouldn’t reveal to anyone else.

“Erm, I guess you could say it’s because I’m stubborn? If I give up now, then all my efforts will have gone to waste.”

“This kind of thing.”

“Please wait for a bit.”

He had brewed tea for her every day after mealtime for the last three months. Teatime was also the time she looked forward to the most because his tea was just so delicious. A little while later, Jin Mu-Won had prepared two cups of tea.

As she brought the cheap ceramic cup to her lips, she smiled contentedly.

This time, it was Jin Mu-Won’s turn to ask questions.

“You seem a bit different than usual.”

Eun Han-Seol hurriedly finished drinking her tea and stood up. It was time for her to leave.

Right before she left, she suddenly turned around and said, “See you later.”

Jin Mu-Won did not reply and only nodded in response.