The sky was overcast and snow began to fall over the Northern Army Fortress. At first, it was just a few snowflakes, but it soon developed into a full-blown blizzard where one couldn’t see even an inch ahead of them. After three days of snowfall, everything had turned white and the accompanying cold froze the entire world solid.

Jang Pae-San and the other men of the Third Company completely cancelled all their outdoor activities. However, Jin Mu-Won continued going on his daily walks despite the wind chill and would often pull all-nighters on the roof of the Tower of Shadows. Only after the sun had risen would he return to his room. He’d then sleep for a bit and read the books that Hwang Cheol had given him.

Jin Mu-Won’s continued adherence to his daily routine made Seo Mu-Sang frown. No matter how stubborn one was, one would need incredible tenacity to be able to endure living like that every single day for years.

Time seemed to crawl to a standstill in this desolate place, and visitors were rare. The longer one spent here, the quicker the feelings of isolation and depression would erode away at the mind, sending one spiralling into the depths of madness. Not even the mercenaries were exempted from these emotions.

Not too long ago, a few men in the Third Company had already shown signs of going insane. If Jang Pae-San hadn’t realized and interfered in time, they would have completely lost their minds.

Unlike Jin Mu-Won, at least these guys had something to look forward to. They only had to endure another two years of this isolation, and then they’d be able to go back to their homes. This was the point that most concerned Seo Mu-Sang. How on earth does Jin Mu-Won manage to remain so calm and rational knowing that he’s probably going to spend the rest of his days living aimlessly like this?

Unbeknownst to Seo Mu-Sang, Jin Mu-Won did have something to live for. The Art of Ten Thousand Shadows. Without this ray of hope, he would likely have ended up going crazy just as Seo Mu-Sang had expected.

Every waking moment including his every breath, movement and even meals were spent contemplating the Art of Ten Thousand Shadows.

Recently though, Jin Mu-Won had been feeling depressed. He had hit a roadblock in his understanding of the Art and had stopped improving.

The world is dynamic; a strong heart should suffice.

The world is ever-changing, but it is enough to always have a strong heart.

This phrase appeared in the middle of the Art of Ten Thousand Shadows. The meanings of many of the poetic phrases were vague, but this phrase in particular resonated strongly with Jin Mu-Won.

I have no idea what it means to have a strong heart. Jin Mu-Won knew that it was okay to skip this part for now and move on, but he couldn’t bring himself to do it. The phrase kept coming back to haunt him as if something in his heart was missing.

He tried to read the Art in its entirely multiple times, but it was as if he were trapped in a blinding fog.

“‘A strong heart should suffice’, is it enough to just have a strong and healthy heart?1 Ahhh, I just don’t get it! I don’t get it at all!”

Jin Mu-Won gave up thinking and went to the Grand Library. Perhaps he would be able to find a solution to his problems in the books there.

The sound of his footsteps in the snow echoed around the empty fortress. The cold reached his toes and jolted him awake. He raised his head and saw that the snow had started falling again after a brief respite.

Jin Mu-Won had a feeling that this year’s winter was going to feel much longer than the ones before. Most importantly, it wouldn’t be one that went past meaninglessly.

Along one wall of the library, there was a large stack of new books. These books had been gifts from Hwang Cheol, who would often buy second-hand books for Jin Mu-Won whenever he passed by a bookstore during his regular deliveries.

Suddenly, Jin Mu-Won furrowed his brows. A window had been shattered inwards, and there was snow on the floor. Someone else had entered the Grand Library.

That person had left footprints in the snow on the floor, so he followed the footprints to a corner of the library.

Just as he was about to go around the corner, he felt the cold touch of metal against his neck.

Jin Mu-Won was shocked speechless. Someone had crept up behind him and placed a glowing white dagger against his neck. Out of the corner of his eye, he could see the curvy and petite figure of the assassin.

The girl looked really young, probably no more than fourteen years of age. She left a strong impression on him with her unusually pale skin, eyes shining like black crystals, lips as red as blood, and black hair with a hint of blue.

The girl whispered from behind him, “Who are you?”

“I should be asking you that question.”

She tightened her grip on the dagger, saying, “Answer me.”

“I am the owner of this place.”

“Owner? So that would make you the heir to the Northern Army?”

“The Northern Army doesn’t exist anymore, but yes, I am the heir. Now it’s your turn.”

The dagger dug into his skin and made him wonder if he was going to be killed in the very next moment, but there was no fear in Jin Mu-Won’s steady voice.

The girl’s voice trailed off as she suddenly collapsed, dropping the dagger on the ground. Jin Mu-Won turned around. The girl’s shoulder and even the floor was drenched in blood. 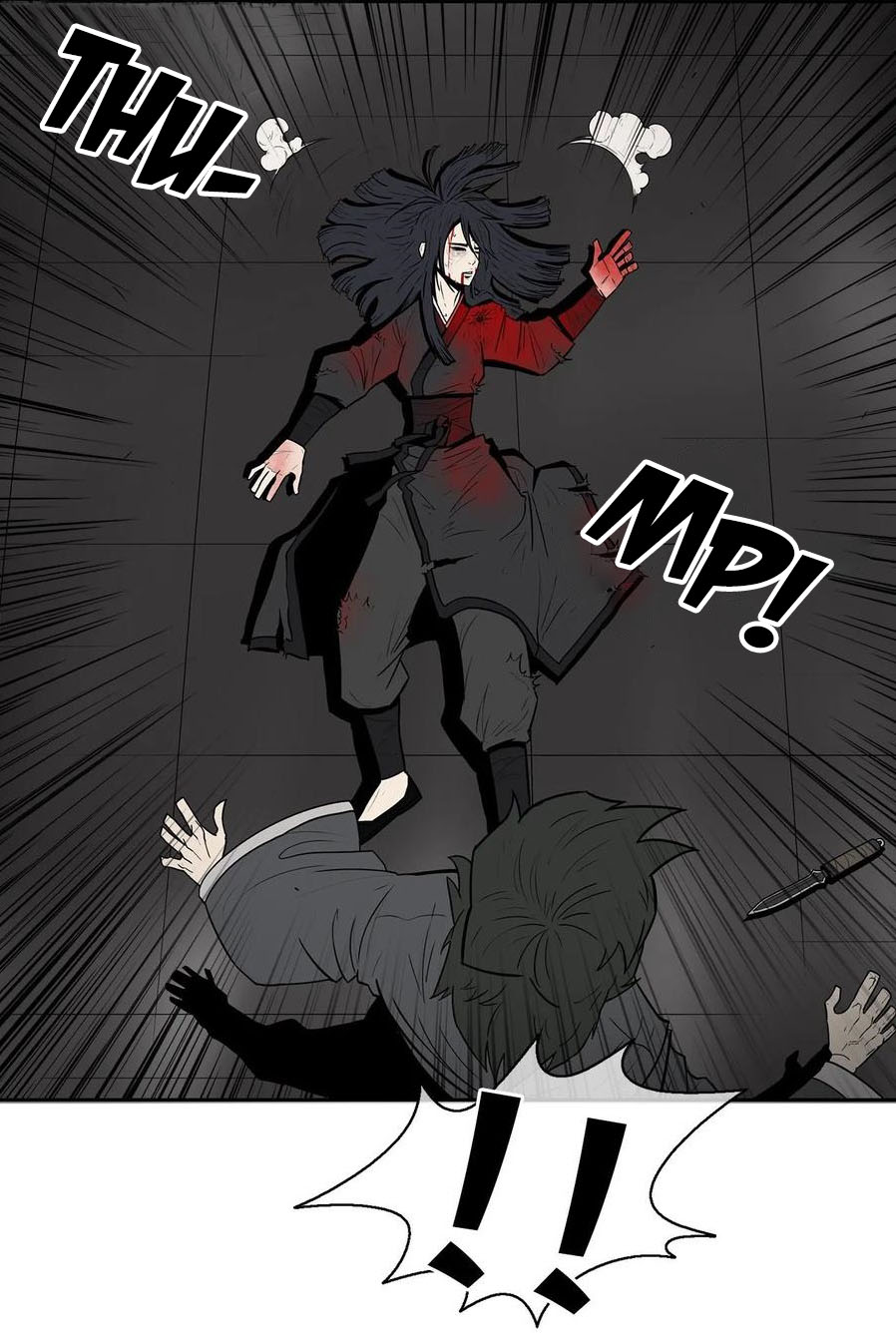 Jin Mu-Won hurriedly put his ear on the girl’s chest. Her heartbeat was very irregular, and it sounded as if it could stop anytime. He had no idea who she was or what she was doing here, but he couldn’t let her die right in front of him.

He picked up the girl in his arms and carried her to his room. After placing her down on his bed, he carefully removed her long cloak, revealing her bloodied clothes. Then, he slowly peeled away the cloth around her shoulder wound.

“Ah!” exclaimed Jin Mu-Won, frowning, as he examined the girl’s wound. There was a hole the size of a coin, and the skin around the hole had turned black.

From the size of the wound, Jin Mu-Won could tell that it had probably been made by an arrow or a small dagger.

He opened the drawer of a dresser next to his bed and took out a small bottle.

“I hope this works.”

Besides martial arts, the Northern Army had heavily invested in the development of new medicines. It was only natural given that they had been fighting a war with the Silent Night for over a hundred years.

One of the new medicines developed by them was the “Heart-Protecting Detoxification Pill (護心除毒丹)”, which was very effective at removing poisons from the body. Unfortunately, both the recipe for this pill and the pills themselves had been lost during the fall of the Northern Army. The one that Jin Mu-Won possessed was the only one left in existence.

Jin Mu-Won didn’t want to risk failure, so he decided to use this pill without hesitation. He opened the bottle and a black mist appeared, followed by a mild but pleasant scent. He had eaten all the other pills except for this one because it was the only one that had no effect on increasing his strength.

Jin Mu-Won pressed gently on the girl’s throat and her lips parted slightly. He then put the pill in her mouth where it immediately dissolved and was swallowed.

He searched through the drawer again. This time, he took out a wooden box filled with acupuncture needles. He inserted one near the girl’s wound and the blood soon stopped flowing out.

“Hah,” sighed Jin Mu-Won in relief. He had already done everything he could.

Now that he had some free time, he took a closer look at the girl’s face. She appeared to be only a year or two younger than him, and she was very pretty. She had long eyelashes, a high nose bridge, and rosy red lips. It was as if she had walked out of a painting.

The contrast between her pale skin and dark, blue-black hair only served to accentuate her beauty. She was already a very alluring flower bud now, but in a few years, she would become a fully blooming flower.

“Why did I pick up this guest even though I don’t have a room for her to stay in?”