Jin Mu-Won (陳武元)1 opened his eyes. Oddly, the world seemed to have become a blur. That was because a layer of moisture had covered his young eyes. Although he was trying his best to hold it in, the tears would not stop flowing, as if his tear ducts were damaged.

Jin Mu-Won wiped away the tears with his sleeve.

This is the last time I will cry. I will never shed tears ever again, swore the thirteen-year-old teenager to himself.

Just then, a man stretched out a large hand and stroked Jin Mu-Won on the head. The boy raised his head to look at the man.

Behind the gentle smile on the man’s face, one could faintly sense his sorrow and despair.

The man knelt down and made eye contact with Jin Mu-Won.

“Son, from now on you will be alone.”

“Do you know why you have to apologize to me?”

“So you do understand. I’m sorry, but from now on, you are the Lord of the Northern Army (北天門)2.”

Jin Mu-Won nodded in response as the man silently patted him on the shoulder.

The man could feel his son’s shoulder shivering. No matter how mature the boy was, he was still a thirteen-year-old child who needed his parents’ protection.

Jin Mu-Won looked up at the sky and avoided the man’s gaze, trying his hardest not to tear up again.

“Damnit! You’re the last head of a family that has fallen apart. Just what kind of shitty inheritance are you leaving me, huh?”

The man stood up, back straight.

His name was Jin Kwan-Ho, also known as the “Northern Wall”. To some, he was the wall of despair, but to others he was the most dependable shield. The word “sorry” did not suit a man like that.

“It’s fine. At least, I no longer have to be restrained by duty. I’m free from all the responsibilities now.”

“I’m glad you think that way.”

Jin Kwan-Ho nodded and looked outside the room.

There were a lot of people in the central plaza. They were waiting for Jin Kwan-Ho to come out.

“It’s time. I shouldn’t disappoint those people. If possible, I wish this was an illusion, but alas.”

Jin Mu-Won bit his lip. His tender lips split open and blood flowed out from the wound, but he still stared at Jin Kwan-Ho as if it didn’t hurt at all.

As Jin Kwan-Ho walked out, Jin Mu-Won followed behind him.

Jin Kwan-Ho’s back was wider and stronger than any other. Jin Mu-Won imprinted the image of his father’s back in his mind.

As he entered the central plaza, Jin Mu-Won looked at the army who had gathered there. 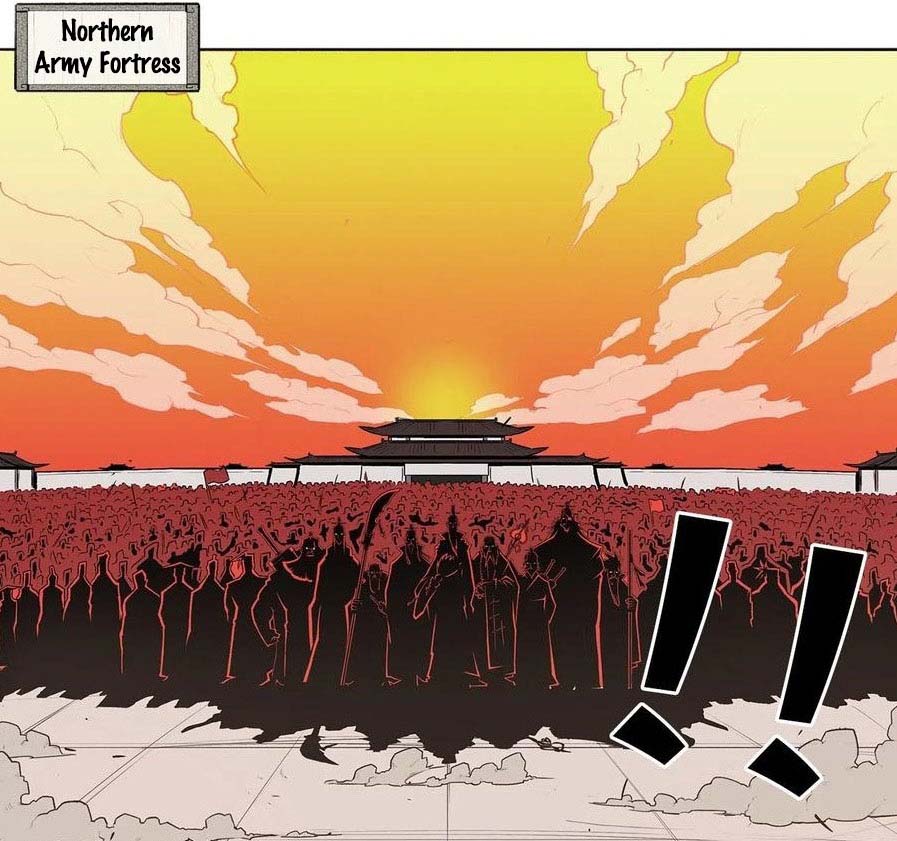 There were people of all ages and dressed in different styles of clothing. The only thing they had in common was the sharpness in their eyes, which was proof that they were all martial arts experts.

Right now, the only thing preventing these people from moving forward were a few warriors still loyal to the North. However, they were just candles in the wind in front of these experts.

Jin Kwan-Ho locked gazes with them one at a time. Among them were soldiers who immediately looked away, as if they were guilty of a grave crime. There were some, though, who glared back at Jin Kwan-Ho with killing intent. These included some people that Jin Kwan-Ho and Jin Mu-Won had been very close to.

Jin Kwan-Ho whispered to himself, “It seems that martial artists from all over have gathered here today. Should I think of this as an honor?”

It was true, all the strongest martial artists in the murim had gathered in the same plaza. Several stood out much more than others.

Nine martial artists stood at the head of the army. The youngest was a warrior in his thirties and the oldest, a monk in his seventies. Overwhelming auras far exceeding the others could be felt emanating from their bodies.

Only those who stood at the very top could possess such intimidating auras. Jin Kwan-Ho looked at them coldly and said, “As expected, Heaven’s Summit (雲中天)3 is behind all of this. I can’t help but be impressed.”

A man in his sixties stepped forward. He had an ordinary appearance that would blend perfectly into any crowd, but his eyes were as deep as the ocean.

Most people dared not face this man’s gaze, because they’d feel like he could see right through them.

“Grand Elder of the Seo-Moon Clan, the renowned ‘Ghost of Zhuge Liang (鬼諸葛)4’.”

The old man’s real name was Seo-Moon Hwa. He was a genius who had brought a clan of fallen nobles back to prominence. It was said that he had reached the limits of knowledge and understood every law of nature. All the wisdom of the world was contained within that tiny brain of his.

He had passed the role of family head down to his son and became the Grand Elder of the clan as well as one of the Nine Skies of Heaven’s Summit. This day, Seo-Moon Hwa and the other eight members of the Nine Skies overshadowed the Sky of the North.

“Why did you betray us, Jin Kwan-Ho?”

“I have no idea what you mean, Elder Seo-Moon.”

“Are you going to keep denying what you’ve done? You colluded with our enemy, the Silent Night.”

“Haha! Seo-Moon, how are you so proud of a life of corruption? You’re even falsely accusing me of colluding with the Silent Night (密夜)5. That’s ridiculous.”

“The Four Pillars of the Northern Army have given their testimony. Are you still not going to confess?”

Jin Kwan-Ho looked at the four men who stood at the very back of the army. Because of the crowd, he could not see their faces clearly, but he could sense their presence.

“Are you four so ashamed that you have to hide behind others?”

Better known as the Four Pillars of the North.

Suddenly, Jin Kwan-Ho turned toward Jin Mu-Won, who stood beside him silently.

His son was more composed and stood prouder than anyone else in the hall. However, Jin Kwan-Ho knew that this was all an act. Jin Mu-Won’s trembling shoulders was proof of that.

No matter how resolute he was, he was only thirteen. He was far too young to calmly accept the terrible misfortune that had befallen him out of nowhere.

Jin Kwan-Ho put a hand on Jin Mu-Won’s shoulder. Jin Mu-Won raised his head and looked up at his gentle father.

Jin Kwan-Ho let go of his son and took a step toward Seo-Moon Hwa. All the members of the Nine Skies, including Seo-Moon Hwa, flinched.

“No matter how much I struggle, I can’t escape from your trap. Still, this is the Northern Army. If I give it up, a third of this desolate region will become truly unlivable.”

“Are you planning to resist, Jin Kwan-Ho?”

A hint of anxiety appeared on Seo-Moon Hwa’s face. The others were just as nervous.

Although it was on the verge of collapse, this was the headquarters of the Northern Army. This was the fortress that had defended against the Silent Night for a hundred years. It wouldn’t be surprising if there were death traps and formations everywhere. Just those were enough to wipe out a third of their forces.

Most importantly, the man called Jin Kwan-Ho was here.

If the man known as the Northern Wall charged at them while prepared to die, the number of deaths he would cause was unimaginable.

The Four Pillars might have betrayed him, but there were still many experts loyal to the Northern Army. One word from Jin Kwan-Ho, and they would follow him to their deaths.

Thus, Seo-Moon Hwa and the other Nine Skies of Heaven’s Summit were more nervous than ever before. Unexpectedly, Jin Kwan-Ho was the one who broke the tension.

“I will disband the Northern Army.”

“I no longer have any reason to lie.”

Jin Kwan-Ho grinned smugly at Seo-Moon Hwa, who scowled back with suspicion. Jin Kwan-Ho looked as if he knew the whole truth, which made the Nine Skies’s faces turn red with anger and shame that they had been trying to hide.

To Jin Kwan-Ho, this couldn’t have been an easy decision. Although it was only for a moment, the Nine Skies were dumbfounded.

“The Northern Army must be eradicated.”

“As long as the Northern Army exists, we will be unable to cement our control over the Central Plains.”

The Nine Skies exchanged thoughts. Regardless of whether he knew their true intentions, Jin Kwan-Ho cut right to the chase.

Many warriors of the Northern Army, who had been facing off against the murim’s forces, chose to commit suicide upon hearing Jin Kwan-Ho’s announcement. As they embraced their deaths, tears flooded uncontrollably from their eyes.

Jin Kwan-Ho turned back to look at Seo-Moon Hwa.

“Are you satisfied now?”

“It seems that this still isn’t enough for you.”

To these people, there was only one acceptable outcome. Jin Kwan-Ho decided to give them what they wanted.

Jin Kwan-Ho released his aura and a powerful windstorm engulfed the area. The Nine Skies raised their weapons and prepared to work together to fight him.

Just as his aura reached its pinnacle, Jin Kwan-Ho suddenly turned his strength on himself. His body shook from the great impact.

Jin Mu-Won ran toward his fallen father and held him in his arms. His clothes were quickly drenched in Jin Kwan-Ho’s blood.

The Nine Skies heaved sighs of relief. They all knew what Jin Kwan-Ho had done to himself. By reversing the flow of his chi, all of Jin Kwan-Ho’s blood vessels had burst. With damaged coronary arteries, not even the gods could save Jin Kwan-Ho now.

Everyone in the murim army, including Seo-Moon Hwa, were stunned speechless by Jin Kwan-Ho’s bloodied appearance.

The man had chosen to end his own life rather than die fighting.

Jin Kwan-Ho’s extreme decision made even toughened soldiers break down in shock. Even Seo-Moon Hwa bit his lip in consternation.

“I wish to die surrounded only by my family.”

It was hard for Seo-Moon Hwa to look away, but if he did not, the soldiers would disapprove of him.

Jin Kwan-Ho smiled weakly in his son’s arms. His heart had been torn to shreds and there was no sign of life on his pale face. He had persisted this far using his powerful chi, but he had finally reached his limit.

“I hope you live freely.”

Jin Mu-Won stared at his father’s face for a very long time. Although his father had died from a damaged heart, his face appeared the same in death as it did in life. Jin Mu-Won stretched out a trembling hand and closed his father’s eyes.

Jin Mu-Won carried his father’s corpse and turned around. I’m all alone now. Alone under the wavering, endless sky.

The soldiers quietly stared at Jin Mu-Won’s lanky profile. This young man, who had not shed even a single teardrop at his father’s death, gave them a strange sense of trepidation.

<
Previous Chapter
Prologue
>
Next Chapter
Chapter 2: Against the Wind (1)